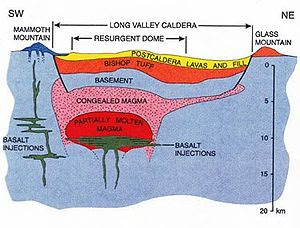 I think that what is most remarkable about this story is how a stack of rock twenty five miles thick has been up lifted and tilted on its side presumably in order to reveal a surface mapping of the roots of a super volcano. That is a pretty neat trick.
It also gives us a scale of tectonic manipulation that was perhaps suggested in the past but not so nicely proven.
As mentioned, this bit of tectonic good luck will give us a pretty exact understanding, comparable to ordinary volcanoes, of the genesis of super volcanoes. Thus our modeling will have credence.
This luck should not be underestimated. We have one such in the North American Plate and that will eventually go extinct. I know of one other in Sumatra and that is it. They are simply not common at all. So getting one cut and laid out for inspection is a lousy bet.
I grabbed a list from Wikipedia and it adds a bit. We can include North Island in New Zealand. I also think that the other Idaho events on the list are all part of the Yellowstone event which is migrating eastward as is perhaps North Island. So we have three VE8’s known to science. I suspect that we must have another one in Alaska that is unrecognized. The rest are simply extinct if they are recognized at all.

WASHINGTON - A team of scientists has found the “Rosetta Stone” of supervolcanoes, in the form of a fossil supervolcano in the Italian Alps’ Sesia Valley.
A team led by James E. Quick, a geology professor at Southern Methodist University, US, found the fossil.
The discovery will advance scientific understanding of active supervolcanoes, like Yellowstone, which is the second-largest supervolcano in the world and which last erupted 630,000 years ago.
A rare uplift of the Earth’s crust in the Sesia Valley reveals for the first time the actual “plumbing” of a supervolcano from the surface to the source of the magma deep within the Earth, according to a new research article reporting the discovery.
The uplift reveals to an unprecedented depth of 25 kilometers the tracks and trails of the magma as it moved through the Earth’s crust.
Supervolcanoes, historically called calderas, are enormous craters tens of kilometers in diameter, which erupt hundreds to thousands of cubic kilometers of volcanic ash.
Their eruptions are sparked by the explosive release of gas from molten rock or “magma” as it pushes its way to the Earth’s surface.
Supervolcanoes have spread lava and ash vast distances and scientists believe they may have set off catastrophic global cooling events at different periods in the Earth’s past.
Sesia Valley’s unprecedented exposure of magmatic plumbing provides a model for interpreting geophysical profiles and magmatic processes beneath active calderas.
The exposure also serves as direct confirmation of the cause-and-effect link between molten rock moving through the Earth’s crust and explosive volcanism.
“It might lead to a better interpretation of monitoring data and improved prediction of eruptions,” said Quick, lead author of the research article reporting the discovery.
Calderas, which typically exhibit high levels of seismic and hydrothermal activity, often swell, suggesting movement of fluids beneath the surface.
“We want to better understand the tell-tale signs that a caldera is advancing to eruption so that we can improve warnings and avoid false alerts,” Quick said.
Quick likens the relevance of Sesia Valley to seeing bones and muscle inside the human body for the first time after previously envisioning human anatomy on the basis of a sonogram only.
“We think of the Sesia Valley find as the ‘Rosetta Stone’ for supervolcanoes because the depth to which rocks are exposed will help us to link the geologic and geophysical data,” Quick said. (ANI)
Known super eruptions (from Wikipedia)

The diagram looks like the Long Valley caldera north of Bishop, CA, not the alps, including the peripheral glass mountain (obsidian dome) and volcanoes.

Of course - it is meant for illustration. Super Volcanoes are a new idea, and we can identify perhaps three. The work in the Alps is certainly a mapping interpretation and hopefully stands up.

This is the first instance of the idea arising that I am aware of in that context. I suspect many othrs will jump in and we will get a bunch of optimistic calls before this is over.