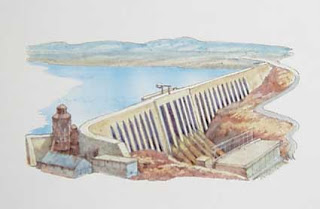 This will be the world’s largest dam if it is ever built. The locale and political issues makes it seem doubtful, but the Three Gorges Dam also got built over problems just as daunting.

That design is well along suggests that it may well get build. That the energy will initially flow to rich markets is inevitable, but diversion later is also inevitable as new African markets open up.
Major development is brewing up around the Congo Basin and now includes a huge six billion barrel oil reserve on Lake Albert.
The one can encourage the other and the area is so huge that it can contain wars, political upheaval and an ongoing insurgency besides.

Grand Inga Dam to light up Africa
14 May 2009
Khanyi Magubane
The final stages of planning are underway for the construction of the Grand Inga Dam hydroelectric project.
According to project leaders, the massive undertaking will be able to supply power to the entire African continent, with enough left over to sell to Europe.
When the Grand Inga Dam is completed, it is expected to have an output of about 39 000 MW, making it one of the biggest hydroelectric projects in the world.
The first phase of the scheme will be the construction of the Inga Three hydroelectric plant, expected to generate about 5 000MW of electricity, which, according to research, will provide electricity to five countries by 2015.
Inga Three will draw water from the existing Inga One and Inga Two.
Its design consists of eight parallel tunnels of 6 770m in length and 13.3m in diameter. Each tunnel will support two turbines, of 270MW each
Inga One was built in 1972 and Inga Two in 1982, and currently supply electricity to mines in the Katanga region of the Democratic Republic of Congo (DRC).
Due to poor maintenance, both Inga One and Two are currently undergoing rehabilitation to increase their efficiency in supplying electricity to the DRC and other neighbouring countries.
A feasibility study ahead of the construction of Inga Three will be completed within 18 months.
The Western Power Corridor (Westcor), the driving company behind the project, is owned by the electricity utilities of South Africa, Namibia, the DRC, Angola and Botswana. Each member country owns 20% of Westcor.
Each of the five countries involved has a mandate to manage the infrastructure aspect of the Grand Inga dam project in each country, which is expected to cost around US$8.5-billion (R71.7-billion). More accurate figures will be available once the feasibility study has been completed.
In addition to Inga Three, Westcor intends on developing hydro power plants with an output capacity of 6 700MW on the Kwanza River in Angola.
Speaking to Business Report, Westcor chief executive Pat Naidoo said the project is close to implementation. “We have been finalising contracts, sorting out finance, talking to all the governments, and the engineering work in the background has been done.”
According to the New Partnership for Africa’s Development (Nepad), Westcor will receive support from a number of financial institutions.
These include the Southern African Development Community (SADC), the Southern African Power Pool, regional economic communities, development agencies such as the Development Bank of Southern Africa and the African Development Bank.
Funding from international banking institutions such as the World Bank, the African Development Bank and the International Monetary Fund had initially been part of the plan, but Westcor has since opted to fund the project independently,
“We concluded that their processes and proposals did not adequately prepare the project for construction. Studies were more of an academic nature and of no commercial value to the project, and were much more costly and expensive,” said Naidoo.
According to Naidoo, once Inga Three is completed, South African electricity utility Eskom will be drawing power from it. This will allow Eskom to shut down a number of older coal-powered stations, which are more expensive to maintain.
Money saved from the coal power station closures will then be used to finance the cost of rerouting the electricity from the DRC.
It is expected that the cost of electricity will be lowered significantly with Westcor setting a fixed price of US 5 cents (about 42 South African cents) per kilowatt hour, making it the world’s cheapest supplier of electricity.
Ambitious plan comes together
According to Engineering News, some $563-billion (R4.7-trillion) is needed to successfully supply power to the entire African continent.
Research by international market research company Frost and Sullivan indicates that for Africa to avoid a looming electricity crisis, the continent has to meet the current average growth of 4.4% per annum.
To date, the Grand Inga Dam project is the most ambitious plan by African countries to solve the challenge of electricity shortages on the continent.
During one of the many brainstorming sessions involving the five African countries, World Energy Council secretary general Gerald Doucet noted that the project has a high level of success. “Grand Inga is the greatest sustainable development project, offering Africa a unique chance for interdependence and prosperity. It's much more feasible now than ever.”
Despite Doucet’s optimism, there has been some Western scepticism about Africa’s ability to complete the project successfully.
The World Rainforest Movement has cast doubt on the Grand Inga’s claim to light up the entire continent.
The organisation says Africa’s rural communities living outside electricity grid areas would not benefit from the scheme, as installing power grids are expensive and the project would mainly be restricted to the urban areas.
“The mega-project will provide industrial economic growth for foreign businesses seeking cheap electricity and financial opportunities for Africa’s elite business and government leaders,” it says on its website.
The environmental group International Rivers is mainly concerned about the massive impact, it believes, the project will have on climate change.
“Development of Inga will also significantly increase Africa’s vulnerability to climate change and political instability. Climate change will bring risks to hydro–dependent economies through increases in the severity and frequency of both droughts and floods. Climate change will add to existing environmental stresses on river ecosystems and watersheds” said International Rivers’s Terri Hathaway.
Posted by arclein at 12:03 AM