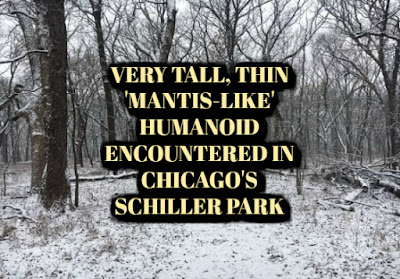 The first possibility is an alien visitor, not least because of the jump suit.  At the same time mind control is also demonstrated to the extent of suppressing fear.  This is no terran creature then.

We do know that alien penetration has steadily increased after the apparent arrangement was make back about 1950. As there are over 70 known alien types it makes sense that a few can safely enjoy a physical visit.  Thus we continune to have accidental encounters such as this one.

Someday they will tell us that we have a real tourist trade going on.  These reports typically do not repeat.

My boyfriend and I were at Schiller Woods on Sunday, December 23rd. We conducting doing a small Wiccan ritual in the woods when we saw a large, thin man appear out of the woods and start staring us down. The man was extremely tall, about 7 ½ – 8 feet tall and very, very thin. He was easily half the size of my boyfriend and his arms hung down toward his knees. At first I was like, “Holy sh*t! It’s Slenderman!" But I quickly realized that it did not look like any man I have ever seen. First off, his eyes were huge, almost looked like a praying mantises eyes, just jet black. He was wearing coveralls that were grey in color and he looked like he was carrying a wand of some sort in his right hand. My boyfriend and I didn’t feel scared, just a little shaken up. We stood there staring at each other for about a minute before it stepped behind some trees and disappeared. Once we lost sight of him, that is when the fear set in and we got out of those woods as quickly as we could. We were both sober, although we had smoked a little bud earlier as part of the ritual. It helps open our aura and allows us to channel energy better.

My boyfriend and I are available to talk about this and can show you where we were at, it’s right off the main trail, by the small traffic circle near the back of the woods.

I spoke with both witnesses via phone and obtained the location of the sighting and the details that lead up to the sighting. The reporting witness is a 27-year-old female and the second witness is her 28-year-old boyfriend. Both witnesses are from nearby River Grove, Illinois and both have been practicing Wicca for about 4 years. The witnesses have indicated that they have both been to Schiller Woods on multiple occasions to do rituals and have seen other practicing groups there before. When asked why they go there for ritual, the female witness said they can practice in relative peace with little to no disturbance from the outside world.

When asked about the encounter, the female witness said they were there to do a Yule ritual for prosperity. They were almost complete with the ritual when they both said she heard a very high pitched sound that came out of nowhere. When she looked up, she saw the being attempting to hide behind a row of trees about 15 yards from them. The being she described as being between 7-8 feet tall and appeared extremely thin and looked like he was wearing a grey jumpsuit. She said that the being’s arms were very long and hung to just above his knees and looked like they had claws. I asked her to please describe this and she said they were long and just looked like they were tipped with claws or what looked like claws. She went further in describing the being as being smooth headed, no indication of hair and with eyes that were insect-like only jet black and took up most of its face.

When asked if the being tried to move toward them, both indicated that it stayed behind the row of trees and would only move to conceal itself from them. Both witnesses indicated that they were both in full view of the being and that the being must have been aware that they could see it as well. Both witnesses agreed that this went on for over a full minute before the entity stepped behind the row of trees and disappeared from view. Both witnesses said that once the being was gone they felt an overwhelming urgency to leave, the feeling bordered on fear and it was like someone had unleashed a pent up wall of fear that had somehow been held back during the encounter. Both witnesses gathered up their things and quickly left, got in their car and drove away and out of Schiller Woods. When asked if they noticed anything out of the ordinary as they were leaving such as lights in the sky, or unusual mist, etc. The female witness said she did notice a lack of wildlife as they left. The female witness indicated that those particular woods are teeming with deer and raccoons and other wildlife and at that time of the late afternoon/early evening, they were out in droves grazing and feeding. These deer are used to people and do not scatter unless directly approached and yet on the way out she saw no wildlife at all, no deer anywhere.

When asked about the use of marijuana in their rituals, both indicated that they both did smoke marijuana prior to the ritual as a sort of ritual aid but that the sighting they had was not induced by or influenced by the marijuana. Both claim they were sober and clear-headed during the encounter. Both witnesses appeared to be sincere and both did not seem to be fabricating any part of the encounter. Both witnesses indicated that they will eventually go back to the woods for ritual and that they feel that their lives were not in any danger. An investigator with UFO Clearinghouse will be making a field visit to Schiller Woods in the upcoming days and any photos and information from that field visit will be posted on this page.

NOTE: Can this possibly be related to the winged humanoid sightings throughout the general area? The body seems somewhat similar to previous reports. Very interesting. Lon 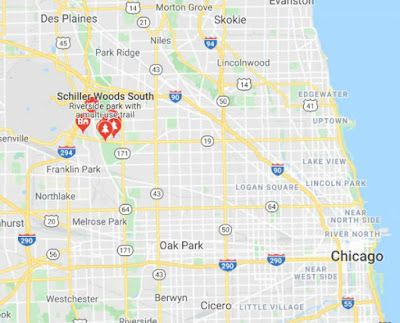 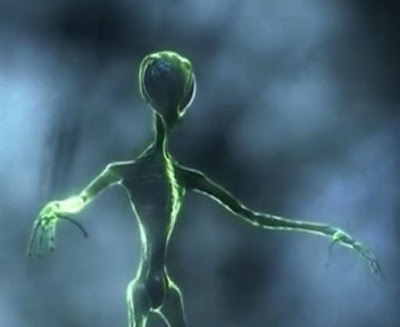 Happened to have stumbled upon your blog and now have it book marked. I've been reading your posts and throughly enjoy them. Your observation on mind control is significant and important. It is something I would enjoy seeing you make a post on.

I agree with you;
"At the same time mind control is also demonstrated to the extent of suppressing fear"

I have read of one or two Sasquatch encounters which speak of some kind of clouding of the mind, whereas in this incident we are potentially hearing of a full psychosis inducting form of mind bending.