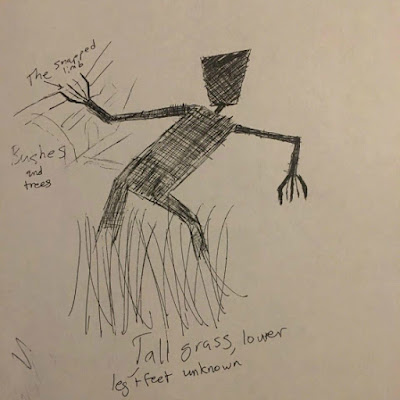 What you are plausibly seeing here is a Giant Sloth applying vision blocking to the observers mind.

We also get some truly important data as well in the details.  The real tip off is that the hands sported three thick fingers.  The other three may have been part of the illusion.  Three thick fingers conform to my expectations for the Giant Sloth, known from the fossil record as three toed.

Once you understand that certain larger creatures on our world can essentially cloak, then reports like this need to be first tested against exactly that conjecture.  Whatever that was, it was always prospectively a cloaked giant sloth and those fingers come close to positive identification.  Not that it also suppressed the ability to hear from its location as well.

“A few years back, I had a weird encounter behind my house. There’s a bunch of trees and Manzanita bushes behind my house, typical Northern California flora. My black Lab was outside around 11:30 pm when she let out the most scared sounding bark I’ve ever heard. I went out to see what she was barking at and started shining my flashlight around. I didn’t initially see anything. The dog barked again, and I caught sight of the humanoid creature as it shifted positions.

It was maybe 15 feet away from me. The encounter lasted probably 2 minutes. The creature was very geometric and generally thin. It’s body was rectangular, maybe 2 feet across, long and vertically oriented. No tapering at either the hip or shoulder. It was partially rounded on the edges, but I would hesitate to describe it as being cylindrical.

Its arms seemed longer than its legs, though I admit it could have been crouching. Depending on whether it was crouching or not, I would say it was most likely between 5 and 7 feet tall. At the end of each thin arm was a hand with 6 fingers, long, almost bony. 3 of the fingers were really thick, while the other 3 were much thinner. It had a thin neck, thinner than its arms. Its head is the part that really freaked me out. It was as wide as its body, and totally featureless. No face, no ears, nothing indicating the presence of eyes or a mouth. The head was wider at the top than the bottom, still possessing that rectangular/cylindrical appearance as the body. It’s overall appearance was unnaturally smooth, its lines were too straight, and the exterior was an incredible shiny black color. I shined my light on the creature more directly, and in spite of not appearing to have any eyes, it seemed to hone in on the flashlight beam, sort of tilting its head and partially pulling itself from behind the tall grass and fallen limb it had been near. It made no sound when it moved, even though I could see the grass moving and see a rather large branch snap as it shifted its weight. I couldn’t tell if it thought I was predator or prey, or if it even thought about me at all.

At this point, I decided I didn’t want to stick around to find out what it was doing or why. I am very scientifically minded. I seek to find the rational explanation for things before entertaining the notion that it could be a supernatural phenomenon. I probably would have discounted the whole thing as my eyes playing tricks on me in the dark had my dog not been so visibly perturbed by the encounter. I’ve never seen her shake like that. There are deer, mountain lions, coyotes, all kinds of animals around my house. She doesn’t care about any of them. Whatever this was left her scared to go outside for several days afterward. I wouldn’t describe the encounter as negative. Terrifying, yes, but the unknown often is. I haven’t seen the creature again. I still get goosebumps every time I think about it.

Has anyone ever seen anything like this creature I’ve described? I’d love to get some opinions on the encounter. I saw the branch snap. The creature had a hand on it, and when it shifted its position, the branch snapped away from the limb it was attached to. It made no sound when it snapped. I could hear my breathing, the sounds of insects behind me back up toward the house, and the sound of passing cars on my street. The dog was barking, and I could hear her movements. But the creature itself, as well as anything near it or behind where it stood made no sound whatsoever.” AH


NOTE: Sketch of humanoid provided above. Lon
Posted by arclein at 12:00 AM