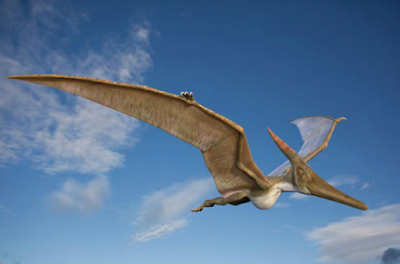 They are slowly adding up to a large list of observers.  What is certain is that in broad daylight it is impossible to make an error.  These folks saw pterodactyl.

Again it is typically near a body of water of some sort which is where they can feed by going deep into the water and stating there as long as needed.

Again folks are getting perhaps one sighting over a lifetime.  Wide individual ranges and plenty of nocturnal foraging is indicated.

Again this creature is also able to grab a lone human and loft them away fro a great distance before dropping them to their deaths.

“I saw one in Belchertown, Massachusetts, my home town, on one of the brightest moonlit nights. I live 8 miles from Quabbin Reservoir. My friend's mom saw it 30 minutes before me while driving by the Quabbin. I think it was seen on radar being the Quabbin is a no fly zone. I saw several planes and 2 helicopters flying around low looking for something. The reason I saw it... I was looking across a field at the chopper in distance when I saw it at the edge of the field about a half a mile from me for about 30 seconds. I do know it was huge. It landed at the town's water treatment plant. I've checked into it to see if anyone else saw it. And also looked into what the Air Force was looking for. Nothing. I don’t mention it to any one because they usually laugh and think I'm nuts but I know what I saw and it was a Thunderbird or Pterodactyl. I'd estimate it to be 15 to 20 feet from head to tail in comparison to the trees.” EL

“I'm from San Antonio, Texas in the Windcrest area and I saw this. It look like this creature (a pterodactyl) and it had dark leathery skin. It was on February 2019 on Valentine's Day. It flew really close to me. I got paranoid and I drove back to the area where I seen it and there was a pond that had ducks and the ducks where, like, hiding in the bushes and when they seen me pull up with my lights (high beams) they came running to the light. I know what I saw and that was no regular bird or an owl because I was looking... I've never seen anything like that.” GF

“Myself and two others saw something similar outside of Houston in 1978. We were fishing in a slough/swamp area. The creature lit on the bank and stayed for a couple minutes and flew off, gaining serious altitude in a short period of time. It was so large and flew so high, there’s no doubt in my mind that others had to have seen it as it was visible for several minutes. I’ve never told anybody that I saw this creature. Fast forward 10 years and I ran into one of the people that was fishing with me that day. I hadn’t seen him in 10 years, as I mentioned and I asked him if he remembered seeing the creature that day and he said, 'Yes' and he will, 'Never forget it.'” SK

“I saw the same bird (a pterodactyl) in December, 2014 and on March or May 2015. Both days was very clouded like when the storm was coming in. When I told people that is about as big as an airplane because that's what I thought it was when I first started to start flapping its wings. The movement of the wings moved like when they flap. My friends and family thought I was going crazy but then I also wanted to wonder if maybe a portal open.” LG

“I also saw the Pterodactyl in 1984 hovering over me while I was going fishing. Although I saw it in Oklahoma... This animal can, without a thought, pick up a person or an animal. I saw it in the middle of the day, at around 12:00 PM noon while I was going fishing. I thought I was crazy for a while but I believe that they exist. The more people report about them on Youtube the more I think that I should try and go catch it.” EC