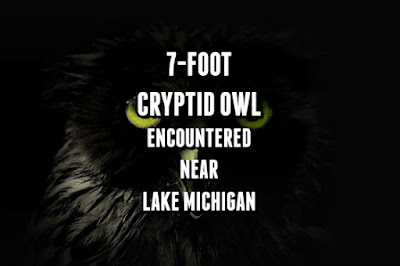 Again we have seen these giant owls before and many so called moth-man reports may well be giant owls.

Way more important though is that this interaction was with a female protecting its brood and all that was seen as well.  Suddenly we have seen a real animal and it is unmistakable.

We have already discussed the potential for the existence of a number of large birds. We do have the Thunder Bird out there and other non bird options as well.  The  possibilities are proving to be totally real as well.  Giant birds have plenty of habitat in any available large evergreen tree and plenty of game for nocturnal hunting.

The range demands also means that they are widely spaced as well.
.

The following account was forwarded to me by a colleague. This encounter occurred approximately 10 months ago in the Spring of 2019. We have attempted to contact this witness for more specific information, but have been unsuccessful so far. I am presenting it here 'as is.' If anything else turns up, I'll add it to this post:

I live in the US Midwest (possibly in Illinois - Lon), 30 miles from Lake Michigan. I don't scare easy or believe in much unexplained, but there's definitely a undiscovered species of giant gray owl that cut through the neighborhood and woods where I use to live. I later assumed it migrates because I staked out the spot for a month afterwards, armed and with a night vision camcorder hoping to prove what I had told a few people. A few believed me because I'm not a bullsh!ter and I'm also willing to help people.

The first time I was told about something strange in this area, I didn't believe it myself. It happened in the very same spot I saw this owl. I really didn't care for the person that said he'd seen a 4 ft owl so I dismissed it completely and enjoyed making fun of him when he'd bring it up. I grew up in the area and was more of an outdoorsman than most adults. My grandfather taught me skills other kids didn't get. He was a WW2 survivor and as a teenager he was enlisted by his mother. He made me tough as nails hoping something like that wouldn't happen to me.

A friend and I were cutting through the same patch of woods that divides to a dead end street, with lots of acres of woods. We were halfway through this patch of woods, not saying much, then we hear a raccoon scurry away. It was loud because it was early spring. No leaves were on the tree and last year's leaves were laying on the forest floor. It was dark but our eyes had adjusted by then. I'm walking ahead when I first hear what sounded like a heavy person jump off a wood diving board. I stopped walking, looking and listening for the source. About 10 yards ahead and about 20 ft up in a full grown oak tree this branch is whipping like something very heavy had jumped off. Reaching in my pocket to see if I even had a pocket knife, which I did not. I look back at my buddy real quick to tell him the first thing that came to mind, which was that it was probably a bobcat. He rolled his eyes at me, turned back to scan the ground.

Then out of the corner of my eye, while looking down, I see something diving from the tree. In disbelief, this huge owl is standing in front of us. I'm 6'1" and this owl was pushing 7 feet plus, with outward curving ears. It had dull yellow eyes the size of baseballs with 3-4 inch thick black rings around the eyes...almost the size of volleyballs. Thats how big its head was. The chest looked like somebody took a sheet of silver and shredded it into shavings. These were the strangest feathers I've ever seen. I was mesmerized by the sight.

My legs didn't work for the first time in my life...I must have been in shock! The owl was within 8 to 10 feet of grabbing me. My legs slowly started to work and I began to scramble backward, not wanting to take my eyes off the owl. I bumped into a large tree, then quickly got behind it. If I would have had a gun on me, I would of taken a shot at it.


It back-peddled like a hummingbird, but sounded like a helicopter blade in the distance with no engine noise. It came around the tree to get me as I positioned myself in order to avoid it. I remember not wanting to take my eyes off it just in case it came back after me. I was looking for a log I could swing if it did come back. I never looked at my friend's reaction. I told him to find a big stick also, but he kept tapping my shoulder from behind telling me to look at something. I remember being kind of pissed, thinking to myself that this was more important. I finally did turned to him and noticed what looked like 6 or more baby owls in the tree, each about 3 ft in height. That was it! We ran like hell and got away. I felt fortunate that we got out of there in one piece." JF

Have you had a sighting of a flying humanoid or huge bat-like creature in the Chicago, Illinois metro area or nearby? The entity has also been referred to as the 'Chicago Phantom', 'Chicago Mothman', 'Chicago Owlman' & 'Chicago Man-Bat.' Please feel free to contact me at lonstrickler@phantomsandmonsters.com - your anonymity is guaranteed. Our investigative group is conducting a serious examination of his phenomenon. We are merely seeking the truth and wish to determine what eyewitnesses have been encountering. Your cooperation is truly appreciated. You can call me directly at 410-241-5974 as well. Thanks...Lon Strickler #ChicagoPhantom #ChicagoMothman
Posted by arclein at 12:00 AM