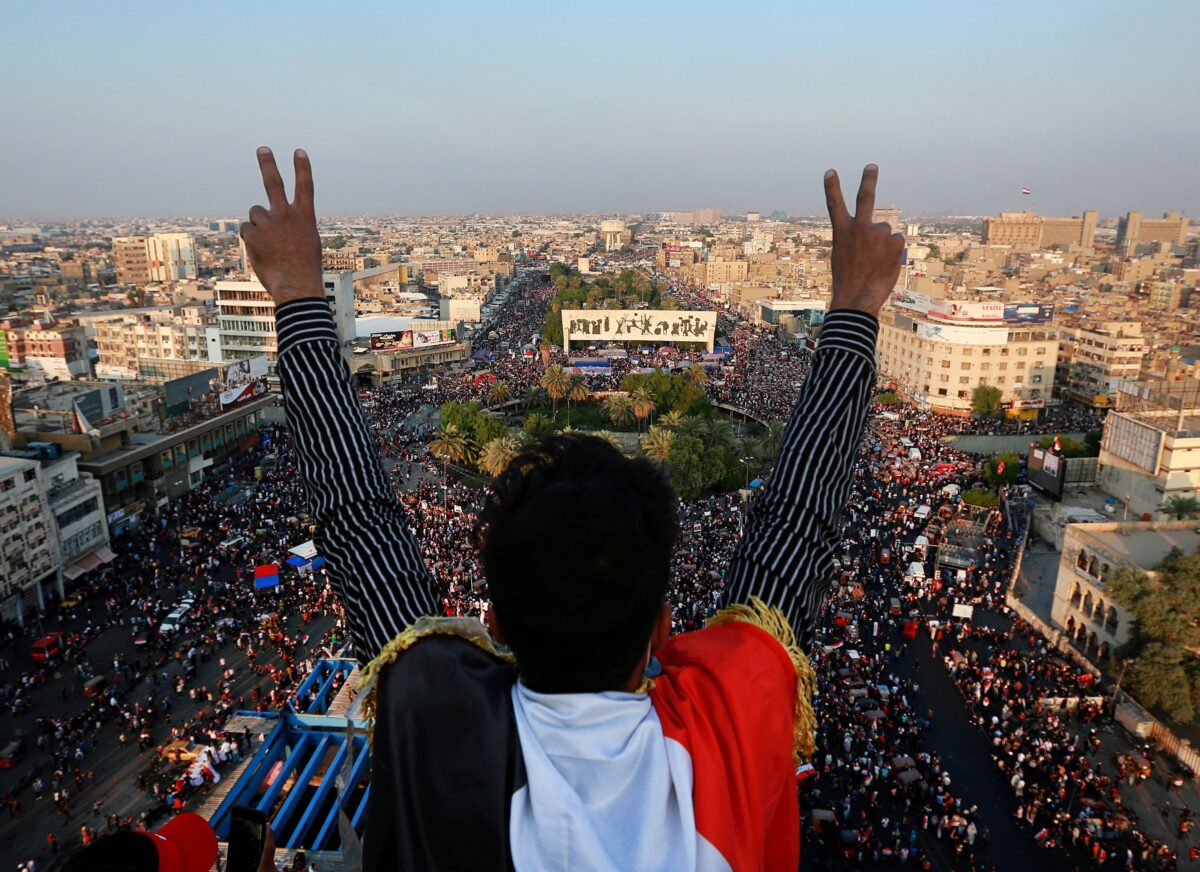 This could well be decisive and presages the actual collapse of the Iranian religious oligarchy.

Of course this is also an astounding story.  This player literally flew into Baghdad to chair a meeting while sitting in the stead of the prime minister.  Imagine Pompao flying into London and then chairing a Cabinet meeting instead of Boris.  It also happened immediately after the stand down of the assault on the USA embassy.

Right now there is a lot of speculation and misinformed hagiography.  That will all die down.  Ignore it for now.  Even This.

Iran has just lost its key most trusted operative in the promotion of global Jihad.  He is the chap who decided the time was ripe to knock over the USA embassy in Iraq and ultimately place his puppets in charge there.  He is also the paymaster throughout the middle East and that includes Yemen.  Worse, his political power was such that he effectively had a free hand.

All that is now in flux at least and i would certainly expect political control to be asserted over his assets.  Iran cannot afford a real loose cannon now.  Imagine replacing Stalin.  We cannot actually predict how this will fall out and we have a sharply higher risk of an ambitious acolyte doing something reckless now.

Yet at the same time the massive financial pressure is also been felt.  They are going broke and i do think that the attempted revolution in Iraq was an attempt to end the pressure on Iran by Soliemani. I sense an element of desperation.

At the same time the massive suppression of street riots is not working either as they are getting larger.  It is getting very hot in the kitchen.

For the present, they are using the death to promote a period of mourning in an effort to quell discontent and promote solidarity.

The big question now is what the desperate Iranians will now do.  Understand that their leadership has just been decapitated.  This was an obvious strategic objective for the USA.  The Iranians may shut the door on the Strait of Hormuz.  Certainly the USA aircraft Carrier group is standing off outside of the Strait. and will not be trapped there and need to shoot its way out.

Yet such a move will work off the current surplus of global oil to the benefit of the USA and Russia while deeply subduing the entire Persian Gulf while Iran goes visibly insolvent.  I do not think that Iran has any such wriggle room.

In fact, right now any move has to work right away as the slightest hint of failure or weakness will see the entire Iranian population hit the bricks.

The clock is ticking now for Iran.

It may well turn out that this was Soleimani's last great blunder..
.

Soleimani’s Assassination Could Be a Political Game Changer Inside Iraq, Say Experts

The assassination of Gen. Qassim Soleimani, the head of Iran’s elite Quds Force, by the United States could be a political game-changer inside an Iraq that recently saw anti-government protests that included calls for Iran to stop meddling in the country, according to Middle East political analysts.

“Soleimani ran the pro-Tehran politicians in Iraq,” Sam Bazzi, a Middle East analyst and the founder of the (the web-based) Islamic Counterterrorism Institute and Hezbollah Watch, told The Epoch Times.

“He had carried a lot of political weight and influence among the Iranian regime’s regional proxies and political allies. His death comes at a time when Iraq is divided and in the process of electing a new prime minister,” said Bazzi.

Soleimani’s political power inside Iraq was visible—the day after anti-government protests erupted in Iraq, Soleimani flew into Baghdad late at night and took a helicopter to the heavily fortified Green Zone where he surprised a group of top security officials by chairing a meeting in place of the prime minister.

The arrival of Soleimani, the architect of Iraq’s regional security apparatus, signaled Tehran’s concern over the protests, which had erupted across the capital and in Iraq’s Shiite heartland and included calls for Iran to stop meddling in the country.

The protests were fueled by local grievances and mainly directed at political elites, but they also posed a challenge to Iran, which closely backs the Iraqi government as well as powerful armed groups in the country. An increasingly violent crackdown in Iraq had then raised fears of a backlash by Iran and its allies.

“We in Iran know how to deal with protests,” Soleimani had told the Iraqi officials, according to two senior officials familiar with the meeting who spoke to Associated Press on condition of anonymity to discuss the secret gathering. “This happened in Iran and we got it under control.”


Explaining the political significance of Soleimani’s death, Kanishkan Sathasivam, a political analyst and Director at William H. Bates Center for Public & Global Affairs at Salem State University, told The Epoch Times that the military commander was “easily the most dangerous individual in the entire greater Middle East, and his death is far more significant and impactful than taking down the leaders of al-Qaeda or ISIS.”

“But I would also highlight the fact that there have been several large demonstrations in Iraq and Syria and even inside Iran celebrating Soleimani’s death. He was very much a hated figure for a lot of people. And the recent anti-government demonstrations inside Iraq routinely included anger specifically aimed at Soleimani.

“So this could energize anti-Iran Shia in Iraq. In Iran, the regime will have no choice but to try and find a way to retaliate in a manner equally high profile as this assassination, possibly targeting a high-level U.S. official,” said Sathasivam.

Joseph A. Kechichian, a senior fellow at the King Faisal Center for Research and Islamic Studies in Riyadh, Saudi Arabia, told The Epoch Times that Soleimani’s death can also change the way the pro-American Iraqi military operates.

“A significant weakening of the pro-Iranian Shi’ah leadership that will now have to strengthen its nationalist credentials instead of playing the Tehran fiddle. Moreover, the military, very much dependent on the United States, will also enhance its credentials and, perhaps, play a large role in political affairs,” explained Kechichian, an author of several books on the Middle East.

Ali Baker, an Ankara, Turkey-based political analyst with Carnegie Middle East, also confirmed Kechichian’s viewpoint. “Iraq and its security forces will be less constrained to sort out these internal things with the absence of Soleimani. Many Iraqi officials are personally tied to him.

“The killing of the strong militia leader Abu el Mahdi el Muhandis will leave its impact on the PMFs. Unless Iran is willing to act aggressively to overcome the absence of Soleimani, Iraqis will be under less pressure,” said Baker.

Political analysts say the upcoming Iraqi parliamentary elections are now extremely uncertain and there are multiple factors that could play a role. Soleimani’s death could have some impact because of the role he was playing in curbing the recent anti-government protests.

“The outcome of the next parliamentary elections will be more attached—in my opinion—to the protests of the Iraqis that erupted in the last couple of months of 2019.

“These protests were clearly objecting to the foreign influence and interference,” said Baker adding that the “new Iraqi government would represent the ambitions and hopes of the Iraqis and not the Iranian interests.”

Bazzi gave another political dimension to the recent developments that all started with the Dec. 27 killing of a U.S. contractor in an attack on an Iraqi military base by Kata’ib Hezbollah.

“In fact, the death of the American contractor may or may not have been intentional. Was Tehran seeking to merely harass U.S. forces or trigger a major crisis as a prelude for its allies in the Iraqi parliament to demand the withdrawal of U.S. forces from Iraq?

“Tehran, for sure, would like to see the withdrawal of U.S. forces from the region, but especially from Iraq and the Gulf,” said Bazzi.

Kechichian, however, believes that Soleimani’s death will have a low impact on the awaited Iraqi elections and that if it happens it would benefit another dormant faction.

“Marginal impact as the overwhelming majority will continue to play its sectarian preferences. If Iran is sidelined in Iraq, which is a possibility though premature to affirm at this time, the upcoming elections might also strengthen the relatively dormant Kurdish hand,” said Kechichian.


Political Gains for the US

Experts say Soleimani’s assassination creates both political leverage and challenges for the Trump administration inside Iraq because the United States’ long term interest is with the Iraqis.

“Beyond eliminating one of its most notorious foes, someone who seldom hid his disgust with everything American, Washington will be called upon to navigate with caution as its long-term interests are with the Iraqi people.

“The latter remained wary of American intentions, and may not have forgotten that it was the Obama Administration’s pro-Iranian policies that handed their country to Tehran on a silver plate before the Trump Administration turned the table upside down. Will Iraqis trust Americans again and can the U.S. afford to forego the confidence of so many?” said Kechichian.

“On the tactical level, the U.S. move might seem to be problematic with regards to relations with Iraq, however, it could offer Iraq a window to act against the Iranian influence at the right time due to the absence of Soleimani. It will be hard to predict how things will evolve in such an environment, but there is no doubt that Iraq still needs the U.S. right now,” he said.

Bazzi said Trump has opportunities to explore inside Iraq. “Now that he’s out of the picture, the Trump administration can push for its preferred candidate(s) and encourage a shift in the country towards Washington and away from Tehran,” said Bazzi.

However, Bazzi also cautioned that since Iran and its proxies have vowed revenge—they would also use political means to do so inside Iraq.

“Evidently, the killing of Gen. Qasem Soleimani has hardened the Iranian regime’s stance. Tehran and its allies are unambiguous about their desire for revenge. This will lead the regime to retaliate politically by rallying its supporters in Iraq to push, via parliamentary legislation, diplomatic pressure and popular protests, for the exit of U.S. troops from the country,” Bazzi concluded.
Posted by arclein at 12:00 AM