Production model of Airlander 10 will be sleeker and more efficient 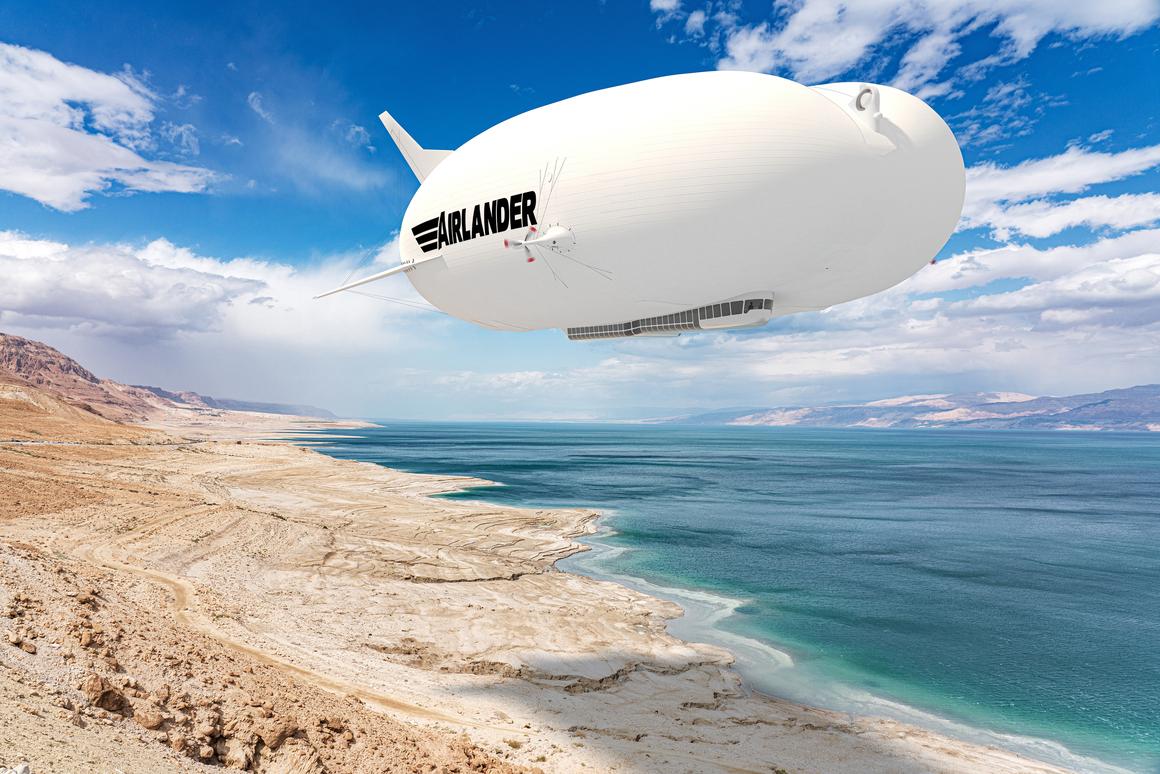 This looks like the first airship to reach production status.  It can carry ten tons and do this at a top speed of 90 mph.  That is pretty respectable although wind patterns will still matter a lot.  It also has a five day trip capability.

Now with an average of 80 mph we have a daily range of 2000 miles which is quite comfortable and even a range of 10,000 miles for long haul shipping.  We are still not hauling freight containers here, but ten tons is certainly respectable.

The next quick fix though is simple drone operation.  We do not need crews to haul fruit 2000 miles from Mexican farms to a Chicago distribution warehouse.  This can also be rigged to land on that warehouse roof as well and to access a hydraulic loading bay.

The numbers may still not work here, but soon enough they will.  And with the coming metal skins we will have speeds up to 200 mph as well that will also provide useful lift that takes this bird a lot higher and faster.  Scale is the big deal here though.  I see no reason that we cannot aim for a four by four shipping container foot print before this is finished.

However, soon enough we will need to switch either to hydrogen or alternately to methane to produce the necessary lift.  Robot control can make this viable as crews can be kept to ground support with protective systems in place.

On the other hand this bird alone is perfect for luxurious travel including private cabins and dining facilities and all that..


Production model of Airlander 10 will be sleeker and more efficient

We've been following the story of the Airlander 10 airship since 2010, back when it was being developed for the US Army. It's now aimed at civilian use, with information on the planned production version of the aircraft having just been released.
As compared to the current functioning prototype, the new model will have a sleeker, more aerodynamic hull. This design update is based on both wind tunnel testing and computer modelling, along with data gathered during test flights of the prototype. Its changed shape is particularly visible in the form of a rounder nose, and a new tail section.
The cabin will also be more aerodynamic, plus it will be longer. The latter is made possible due to the fact that components such as the fuel module, which are currently slung below the prototype's hull, are being moved up into the hull. As a result, the cabin can now be up to 46 meters long by 6 m wide (151 by 20 ft). In that configuration, it offers 2,100 sq ft (195 sq m) of floor space, not including the flight deck.
Hybrid Air Vehicles, the UK company that is adapting the original technology for civilian use, previously released images of what a deluxe tourist-carrying version of that cabin might look like.
Other changes include the addition of a bow thruster for better maneuverability during ground handling, along with a move from non-retractable to retractable landing gear. Additionally, whereas the prototype's two front rotatable propulsors are currently ducted, they will be unducted on the production model. This should not only reduce weight, but also improve their ability to generate directional thrust.
Overall, the production version of the Airlander 10 will be five percent longer than the prototype (pictured above), which itself is 92 m (302 ft) in length. That said, Hybrid Air claims that it should be more fuel-efficient than the original, allowing it to "deliver up to a 75-percent reduction in emissions over comparable aircraft."
It should also be easier to maintain, and cost less to operate. What's more, a pure-electric propulsion system is in the works.
The prototype is currently the world's largest aircraft. It's powered by four 325-hp (242-kW) turbocharged diesel engines and uses aerodynamic lift like a conventional fixed-wing aircraft to take off, with helium keeping it aloft once it's in the air.
Additionally, it can carry payloads of up to 10,000 kg (22,050 lb), stay in the air for five days at a time with a crew, and doesn't require a purpose-built runway.
Posted by arclein at 12:00 AM