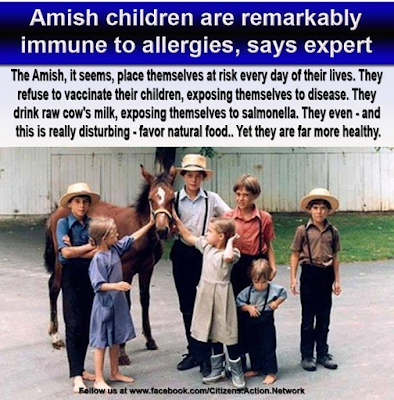 Quite possibly.  We are seeing increasingly desperate attempts to use the law to force vaccination, and the public blow-back is rapidly climbing.

The science is also now spiraling out of control as autism is steadily emerging as a pandemic while the actual met stats are directing attention onto all forms of vaccination.

Obviously with the massive ramp up of multi vaccines, the suppression of statistical evidence becomes impossible.  Recall forty years ago, Peanut allergy was rare as was autism.  The low enough stats could be suppressed. - nothing to see here.  Forty years before neither barely existed and never existed forty years before that.  This is an assertion that i would welcome someone able to say different..

The assault on Amish rights is of course outrageous and truly the canary in the coal mine.  How stupid are these politicians and vaccine peddlers?.

The battleground is now set. On one side are those who continue to claim “the science is settled” on vaccine safety and want to eliminate all vaccine exemptions, essentially forcing all children to get vaccines whether their parents agree or not. On the other side are those who believe that the science is far from settled, and believe that parents should have the right to choose what gets injected into their children’s bodies without fear of punishment.

The latest skirmish of this battle was on Monday in Trenton, NJ, where a bill proposing one of the nation’s broadest bans on religious exemptions to childhood vaccines did not have enough support in the Democrat-controlled State Senate to be put up for a vote. The bill would have ended a policy that allows parents in New Jersey to cite religious beliefs as the reason their children have not been immunized, without affecting the child’s ability to be enrolled in school.

Weeks of sustained and boisterous protests outside the State Legislature by those opposed to forced vaccination are being touted as the main reason the bill did not go through. The intensity of the prolonged protest was unlike anything in Trenton in over a decade, many longtime lawmakers and

The protesters took it to be a monumental victory for their cause, and some advocates are seeing this as a tipping point in the battle, going into 2020 with great optimism. Vaccine safety advocate Robert F. Kennedy Jr. got clamorous cheers as he spoke to the protesters about the legislators pushing this bill. According to him:

You guys are heroes! Because this state is known as the medicine cabinet state, this is the headquarters of all those [pharmaceutical] companies, they own these people in the state legislature. And guess what? You beat them here! You beat them in December, when they first came out, and now they’re coming back and they’re trying to do it again. And we’re going to beat them this week too! (source)

Mainstream: “The Science Is Settled”

Mainstream media had a predictably different tone on the matter, In a New York Times article on the subject, the familiar vaccine safety mantras are cited in authoritative parlance from legislators:

“It’s going to get done…They can bang on their drums and their sirens and their truck horns…This is a real public health emergency.”–Senate president Stephen M. Sweeney
“The science is settled on this,”–Senator Loretta Weinberg, a sponsor of the legislation
“Vaccines are safe, and we in public health need to say that repeatedly.”–Assemblyman Dr. Herb Conaway

The article also notes that ‘States that have limited or revoked religion-based vaccination exemptions include California, Mississippi, Maine and New York, which was at the epicenter of a measles outbreak last year.’

The notion that a potential measles outbreak is ‘a real public health emergency’ is starting to wear thin on an awakening public. The only lasting effect of the measles outbreak cited above in New York is that those that were infected now have true lifetime immunity from the measles. The outbreak did not cause a single death. But this shouldn’t be a surprise, since according to the CDC, there were no deaths from measles in the U.S. over a whole decade studied (2004 to 2015), and none have been reported since then either. During that same ten-year period, the government’s own Vaccine Adverse Event Reporting System (VAERS) reported 108 deaths from measles vaccines (source). And remember, this only represents children whose parents challenged other diagnoses such as SIDS and SUD and were successful in convincing the VAERS court of the culpability of the vaccine. This is likely a very small fraction of actual cases.

I think Assemblyman Dr. Herb Conaway summed up lawmakers’ strategy perfectly when he said that proponents of mandatory vaccination need to say repeatedly that vaccines are safe; the reason is because if they instead directed the public to the statistical evidence, that evidence may prove the opposite.

WHO Miffed By Waning Vaccine Confidence

The Global Vaccine Safety Summit organized by the World Health Organization (WHO) in early December, covered in-depth in this recent CE article, revealed that public confidence about the safety of vaccines is declining. Activism challenging the safety and proper testing of vaccines, like the New Jersey protests described above, seems to be having an impact on this. But not only has the public started to question vaccines in larger numbers, public health officials are losing confidence as well. Professor Heidi Larson, Director of the Vaccine Confidence Project, sums up the dire situation at the summit as follows:

The other thing that’s a trend, and an issue, is not just confidence in providers but confidence of health care providers. We have a very wobbly health professional frontline that is starting to question vaccines and the safety of vaccines. That’s a huge problem, because to this day any study I’ve seen–and we’re constantly looking on any studies in this space–still, the most trusted person on any study I’ve seen globally is the health care provider. And if we lose that, we’re in trouble.

If you watch the video of the meeting that has been made public on the WHO website, you might be struck by the nature of the concerns of speaker after speaker. While this is supposed to be a vaccine safety summit, virtually none of the speakers voiced a straightforward concern for the safety of vaccines with regards to the health and safety of the world’s children. One might think that if this was really about safety, that the death of one child from vaccination should be enough for the government, in collaboration with the manufacturers, to suspend the particular vaccine in question until testing could be done to certify the safety of that vaccine to everyone’s satisfaction.

Instead, all the concerns at the summit revolved around what the WHO and its affiliates can do to ward off vaccine hesitancy and enforce vaccine compliance. In the face of rising evidence of the damage linked to vaccines, the mandate of the people in attendance does not include actually questioning whether a child should get a particular vaccine or whether current vaccine scheduling is unsafe. We get a clue as to why this is the case in examining who actually gets invited to have a seat at this summit:

Note the phrase ‘vaccine safety stakeholders.’ In other words, these people all have a STAKE (financial, professional) in the safety of vaccines, or more precisely, they have a stake in the perception that vaccines are safe, so that the pharmaceutical business can keep galloping along. Those who would try to look at the evidence of vaccine safety objectively and suggest significant changes in the vaccine schedule would have long been vetted out and would never have been invited to the meeting.

And certainly no parents of vaccine-injured children, those who have first-hand knowledge about vaccine safety concerns, would ever be given a voice at this summit. That doesn’t mean their voices are not being heard. In a recent episode of Del Bigtree’s Highwire below, where I first saw footage of the vaccine safety summit, Del does a rather masterful job of parsing through some of the statements made at the meeting and giving us a greater context that certainly gives rise to the feeling that the tide in this battle is turning:

Conscious, non-violent activism, where people stand up together and say that they don’t consent to something being brought forth by our authority, is an important catalyst of our collective awakening. In the bigger picture we can understand how even the most maligned authority figures on the planet are people, just like us, and even if their actions are unacceptable, such actions are compelling us to take on the arduous process of challenging and even stepping away from authority altogether as we slowly gain a greater sense of our innate sovereignty.