Bernanke Hints At Negative Rates, "Purchases Of Private Securities" To Fight Next Recession 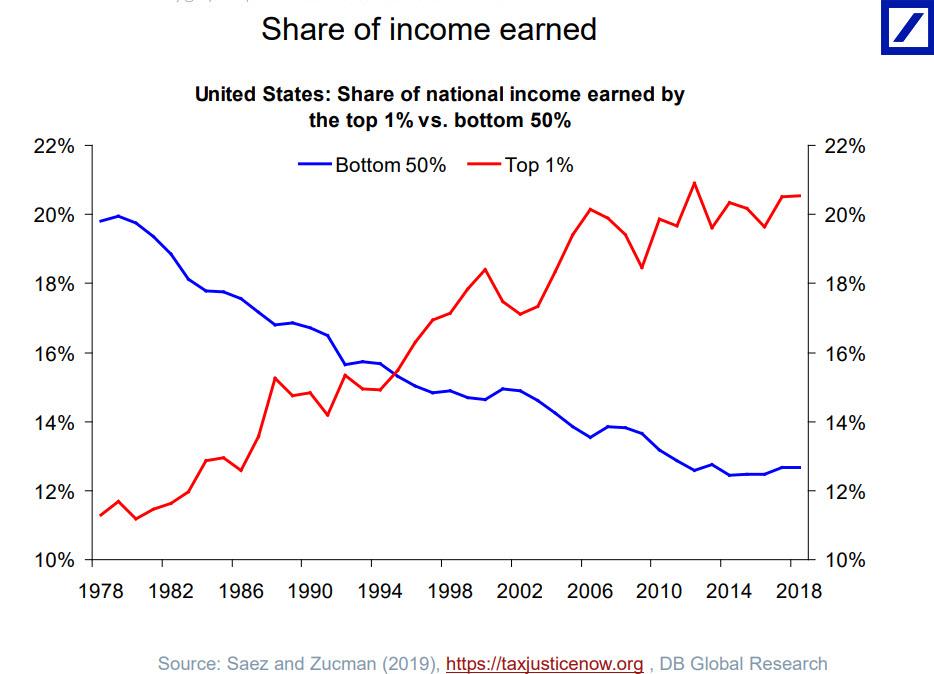 Various policy decisions over the past three decades has produced a globalization of what is cheap money or more correctly, cheap credit.  Japan was  the first to even test out the idea of negative interest rates.  It is thirty years later and the rate structure remains on the floor.  during this time the rest of the global economies have also been trending to market bottom rate structure.

The truth is that they can not go lower and are no longer a meaningful tool for policy.

The impact globally is that the money must buy non income producing assets more and more.  This flood of cash is supporting the stock market in particular.  This continues to flood cash into governments and the corporate sector in particular and a resolution of poverty more and more pressing.

This will be the only way to offset contracting demand for credit globally as we capitalize the middle class everywhere.  Even that will ultimately become self financing as well.


Bernanke Hints At Negative Rates, "Purchases Of Private Securities" To Fight Next Recession


Nearly a decade after his now laughably idiotic prediction that the Fed could hike rates in "15 minutes if we have to" - which of course it could and it would then promptly crash markets as late 2018 showed which is also why the Fed will never be able to normalize monetary policy ever again - former Fed Chairman, who together with Alan Greenspan will be responsible for blowing the three biggest asset bubbles in history of which the current one may well be last one as it will mark the end of central banking as we know it, Ben Bernanke delivered what he called "a relatively upbeat" assessment of the U.S. central bank’s ability to fight the next recession.

Ahead of his address to the American Economic Association’s annual meeting on Saturday, Bernanke wrote in a blog post that "the new policy tools are effective," perhaps seeking to reassure himself and other central bankers rather than the population and commercial banks around the globe, which is reeling form an onslaught of populism in response to the historic wealth transfer programs initiated by central banks whose negative rate policies have brought the European financial sector to the edge of the abyss.


"Central bank purchases of longer-term financial assets, popularly known as quantitative easing or QE, have proved an effective tool for easing financial conditions and providing economic stimulus when short rates are at their lower bound. The effectiveness of QE does not depend on its being deployed during a period of market turbulence."

"Quantitative easing and forward guidance can provide the equivalent of about 3 additional percentage points of short-term rate cuts." By which he meant that the Fed, which is currently engaging in QE4, can boost markets to even recorded highs, at which point trickle down may finally happen... although it won't, and instead the rich will get even richer as the US becomes an even greater Banana republic thanks to people like Bernanke.

While the Fed has limited room to cut short-term interest rates because they’re already so low - and negative across Europe and Japan - Bernanke argued that quantitative easing and forward guidance could provide enough extra punch to combat a future economic contraction.

Anticipating that the next market crash will test the central bank's liquidity injecting skills (and reputation) like never before, Bernanke said the Fed should also consider adopting the same "tools" employed by other central banks, including purchases of private securities, negative interest rates, funding for lending programs, and yield curve control. More importantly, the man who in 2005 said on TV he did not think US housing could ever decline, urged the Fed against ruling out the possibility of pushing short-term interest rates below zero, a very clear hint of what awaits the US during the next recession.

And yes, Bernanke did also commend banks such as the ECB for purchasing corporate bonds, just so everyone is on the same page as to what happens when corporate bonds sporing record leverage, finally crater in the next recession.

Then there was an amusing tangent on helicopter money and MMT, which as Bernanke explained, has been going on for quite a while now: "the risk of capital losses on the Fed’s portfolio was never high, but in the event, over the past decade the Fed has remitted more than $800 billion in profits to the Treasury, triple the pre-crisis rate."

Just in case it wasn't clear why the Fed is a socialist's best friend...

That said, no matter if the Fed has to buy equities first, or cut rates to, say, -10% and threaten to make all paper currency illegal in order to fight future market drops, pardon recessions, longer-term yields will probably spend extended periods of time at zero or below, according to Bernanke, now a Distinguished Fellow at the Brookings Institution in Washington, who appears to realize that reliance on the Fed's monetary policy has pushed the entire world into a twilight zone of negative real rates, from which there is no escape, but at least forces even more disastrous monetary policy which makes the rich even richer, at least until the next civil war erupts and the poor masses retake what they believe is theirs. 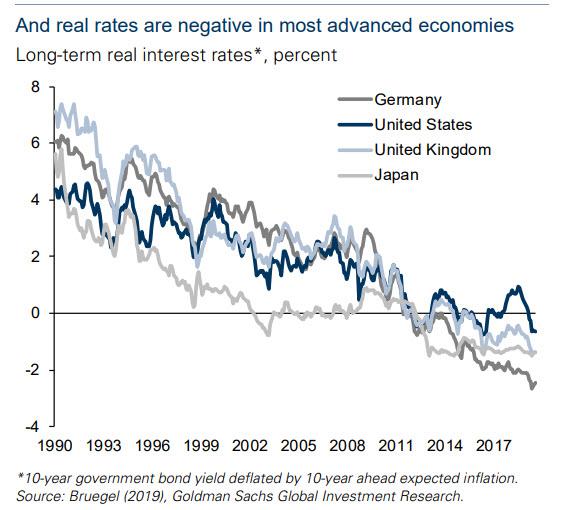 There was one moment when the prevailing idiocy of Bernanke's blog actually gave way to fact, namely when he admitted that pervasive negative rates pose risks to financial stability. "Monetary easing does work in part by increasing the propensity of investors and lenders to take risks," Bernanke said, perhaps eyeing the fact that the Fed had no choice but to inject $100 billion per month in the last quarter of 2019 just to push stocks to new all time highs.

"Vigilance and appropriate policies, including macro-prudential and regulatory policies, are essential", he added without a dose of sarcasm, perhaps hoping that none of those who read his steaming pile of dogshit were alive when he said that "subprime is contained."

Bernanke was also kind enough to point out that the Fed's grossly erroneous inflation metric will never be fixed to accurately capture true inflation, which is not just within the economy but also among asset prices. Because to the Fed, the latter is mysteriously a non-issue. 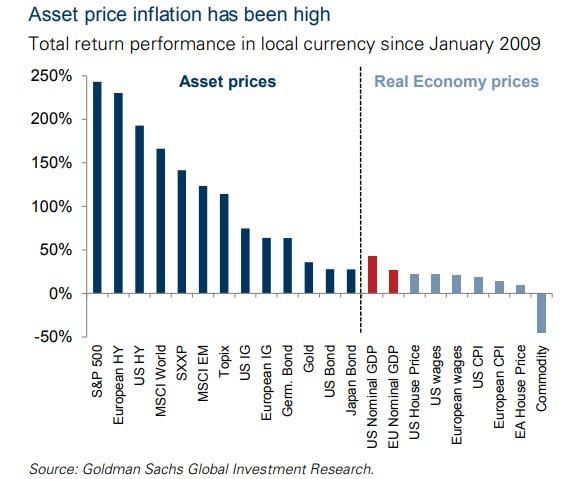 While Bernanke's blog post was unfortunately devoid of any moments of factual or truthful insight unlike his oddly honest and accurate May 2014 prediction that "there would be no rate normalization" in his lifetime, Bernanke did admit that his entire monetary policy dogma is predicated on a crucial hypothesis: that the neutral level of short-term rates which neither spurs nor restricts economic growth is between 2% and 3%. According to Bernanke, if the equilibrium rate is much below that then QE and forward guidance won’t be sufficient to fight off a downturn. “In that case, other measures to increase policy space, including raising the inflation target, might be necessary,” he said.

Of course, as we first warned back in December 2015 when the Fed's QT was just starting, the Fed's balance sheet shrinkage would prove to be a giant mistake precisely because soaring US debt and slowing US growth meant precisely that: the equilibrium rate is now roughly zero.

Of course, four year later, we know that this was also spot on: the Fed's attempt to "normalize" rates resulted in the first and only mini bear market of the post-crisis era, and the central bank had to quickly cut rates while launching "NOT QE."

So besides negative rates and purchases of bonds, and eventually stocks, what does Bernanke believe will happen in the next downturn? His first policy prescription should come as no surprise: echoing virtually every other talking head over the past year, Bernanke said that fiscal policy may also have to play a more central role in countering a contraction. This is better known as the "it takes debt to undo the consequences of record debt and a debt crisis." How it actually works out and leads to a happy ending is anyone's guess.

That's not all: going back to his famous November 2002 speech in which he first hinted at helicopter money, Bernanke said that central banks in Europe and Japan face even greater difficulties, largely because inflation expectations there have fallen too far. "In those jurisdictions, fiscal as well as monetary policy may be needed to get inflation expectations up. If that can be done, then monetary policy, augmented by the new policy tools, should regain much of its potency."

Naturally, such a JV between fiscal and monetary policy, which is where the central bank officially monetizes the government's debt, is also known as helicopter money, and it's only a matter of time before it arrives.

In parting, Bernanke reminded everyone of the farce that defined his entire tenture, saying that unlike Volcker's days, the problem is not that inflation is too high, "it’s the risk that it’s too low."

While we would challenge Bernanke (or his acolyte Neel Kashkari) to show up at anywhere in public and tell the struggling consumers drowning in credit card debt that inflation is not too high, it is in fact too low, we know this will never happen, and instead we urge the former Fed Chair to highlight to us which asset class he deems as having "too low" inflation ever since he launched QE1... and QE2... and QE3.
Posted by arclein at 12:00 AM