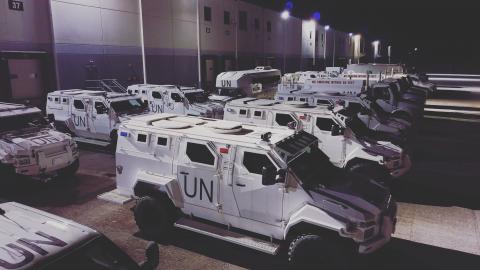 In the end, they blinked.

Of course it is not over yet, but thousands of demonstrators hitting the bricks must give pause.  In the meantime we have an answer to the ongoing UN MEME that has been out there for a couple of months at least.   I think that this represents planning put in place when they thought Hilary was going to win.

Bringing the UN in to disarm the public is an absurd plan, but someone thought that they could get away with it.  Certainly Antifa was all part of this.  It really represents the same gross under - estimation of the patriotic citizenry that blinded them to the real threat of Trump.

A Hilary presidency supporting this plan would certainly have degenerated into civil war against its citizens.  I do not know if they understood this.  Now is is a failing echo that will soon be completely destroyed at the ballot box.

And somewhere out there there is and has been a lot of voter fraud underway..

The Virginia Governor wants to bring in UN Peacekeeprs to enforce his gun confiscation policies and to actually begin the process of collecting Patriot guns. Gun confiscation is merely an avenue to violence which will allow the UN to roll out its troops on American soil, under the Kigali Principles.

As Mark Twain said, history may not repeat, but it sure does rhyme. Please consider the following:


Virginia Governor Ralph Northam is the modern day equivalent to Lord Dunmore, the Governor of the Colony of Virginia, headquarted in Virginia. On November 25, 1776, Dunmore decreed martial law in the proclamation listed below.. The document was published in a Virginia Gazette, promising to free slaves who would fight for the crown. Dunmore's goal was to disarm Patriot, just as British troops attempted to do at Lexington and Concord.

With regard to Lexington and Conrord, British General Gage sent soldiers on April 18 to Concord to seize or destroy its gunpowder. Forewarned, the rebels hid the powder and the next day fought what became known as the Battles of Lexington and Concord. April 21, the day Governor Dunmore raided the Williamsburg Magazine, South Carolina patriots seized the powder in Charleston. The day after, Benedict Arnold—not yet a traitor—led forty men to seize the powder in New Haven, Connecticut. April 25, Maryland patriots confiscated the powder from a Baltimore storehouse. True to history, when a planned subjugation is being implemented, seizing the guns is the first step. And seizing the guns, historically, is a precursor to absolute tyranny, at minimum, and at most, it is the harbinger of goverment sponsored genocide.Let's shift our attention to the modern-day.
Antifa and the Belt Buckle Strategy

Federal authorities on the ground, already know that Antifa has their marching orders from George Soros. They are employing the "Belt Buckle" strategy and this is what we could expect:


Therefore, the danger is that Antifa will dress up on MAGA gear and attack police and others, thus discrediting Patriots and the anti-gun confiscation rally. Northam's goal is simple. They are seeking to start the violence in order to commence a civil war. Why? Because the Deep State controlled Democrats knows that they cannot win an election. So, they have to seize the guns and agitate the beginning of a civil war.

The big question remains? What is going to happen on Monday? To answer that question, let's look at a couple of developments.

The government has imposed a no-fly zone. This certainly prevents aerial combat in the impacted protest areas. Is it likely that Patriots were flying F-F-16's to the anti-confiscation rally? Of course it doesn't.

If the UN were to roll out Peacekeepers in support of Governor Northam, they would need access to the skies and be able to emply GPS to coordinate troop movements. President Trump has take steps to block both opportunities. L

ook at the federal order from the FAA which bans air travel in the impacted area.

GPS testing is scheduled as follows and may result in unreliable or unavailable GPS signal.

C. Duration: Each event may last the entire requested period.

E. Pilots are encouraged to report anomalies in accordance with the Aeronautical

The NOTAMs discussed in this advisory may change with little or no notice. Pilots are

advised to check NOTAMs frequently for possible changes prior to operations in the area.

NOTAMs will be published at least 24 hours in advance of any GPS tests.

Again, it is clear that this prohibition does not apply to Patriots. Why then was it enacted. Stay tuned.......


In addition to the no-fly zone, the federal government imposed a GPS blackout in the impacted are. Certainly, some patriots will be impacted as they look for restaurants, motels and gas stations. However, what this actually prevents is much more significant.

Here is the GPS blackout map obtained from a Mike Adams article from Natural News:

A GPS disruption scheduled to overlap with the anti-gun confiscation rally, has very little impact on the protestors. However, it would have a huge immpact on the deployment of following under the Kigali Principles should Antifa be able stir up enough on-scene violence: 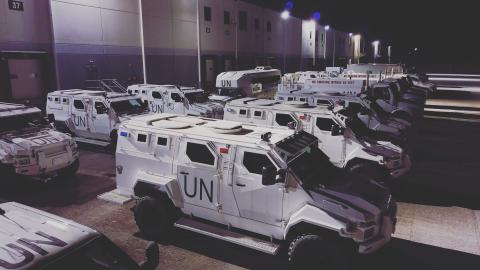 We know that Governor Northam already threatened to bring in the UN Peacekeepers. 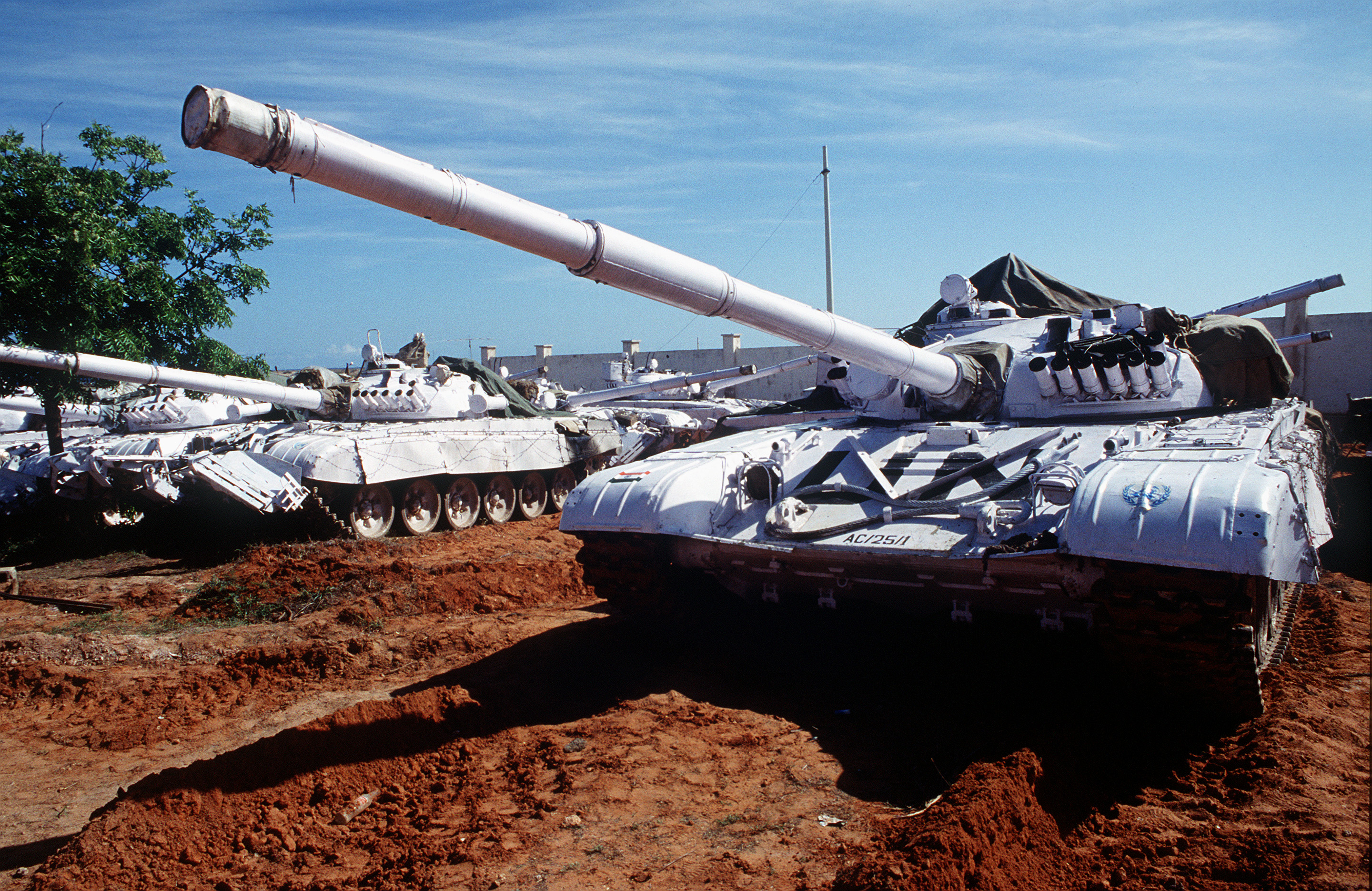 The Navy's Carrier Strike Group Four (CSG4), is jamming GPS signals from Jan 16th – 24th, which overlaps the overlaps with the anti-gun-confiscation event in Richmond, Virginia.

At this point, Trump and his military are in charge. The UN is being prevented from mobilizing. Northam is on his own. However, there is a lot that could still go wrong and this will be the topic of the next article in this series.

Democrats might wield power in the Old Dominion, but gun rights backers haven’t given up the fight.

As lawmakers met Monday to consider a slew of gun control bills, they were greeted by “thousands” of Second Amendment supporters determined to voice their opposition, The Washington Free Beacon reported.

Even in the face of that kind of popular discontent, four measures moved forward in the state’s Senate Judiciary Committee, thanks to a Democratic majority, though some were in slightly weakened form, The Free Beacon reported.

But one bill, known as SB 16, a controversial measure that would have “effectively” allowed authorities to confiscate weapons that violate it, was withdrawn entirely, The Free Beacon reported.

It was the potential of people power on full display.


“We are beyond impressed by today’s turnout,” said D.J. Spiker, Virginia state director for the National Rifle Association’s Institute for Legislative Action, according to The Free Beacon.

“You can see the passion and enthusiasm that the citizens of Virginia have in joining us in this fight,” Spiker said.

It’s a fight that’s been building since the fall’s elections put both houses of the state legislature in Democratic hands, along with the governor’s office, which Democrat Ralph Northam won in 2017.

In response to ambitious Democratic plans to proceed with gun control measures, Second Amendment supporters have mobilized throughout the state, with individual jurisdictions declaring themselves to be “sanctuaries” for Second Amendment rights.

But with the legislature in session, the conflict is being concentrated in the Virginia State Capitol in Richmond

And gun rights supporters made it clear they aren’t backing down.