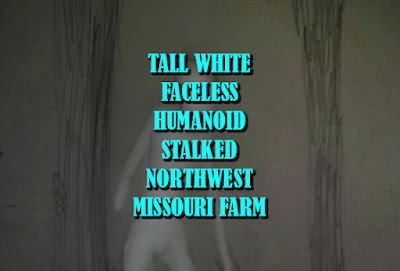 “We saw something we can't explain. About a year ago (2018), I was out back with my family. It was around 8 pm and the sun was setting. We lived in a farmhouse in the middle of nowhere, the closest neighbor was far away. Something down the field kept catching my eye, but I ignored it at first. My sister saw it too and kept looking out towards the trees. She was getting freaked out about it. My mom said to go investigate, so my sister and I started to walk across the field towards the treeline. Big mistake.

It's hard for me to describe. This was the most terrifying thing that has ever happened to me. I didn’t see it at first and I didn’t understand why my sister was so scared, until we were about 100 yards away. Then I saw this creature. Tall, probably 8 or 9 feet tall. White, humanoid with an elongated head and no face. It had long arms and peaked around the trees. We stopped in our tracks. We couldn’t tell what it was. It took a few steps further out of the trees and swayed back and forth at me like a praying mantis!

My sister and I ran screaming back to the house, where my mom stood, jaw dropped. She saw it too. I had never been so scared in my life. We grab the binoculars and watched this terrifying creature peak in and out of the treeline, spying on us. My grandma thought we all had a wild imagination. The sun was almost gone now and it was getting really dark, and the darker it got, the more it moved. Back and forth along the trees. It was terrifying, so we went in for the night and locked everything up tight.

I couldn't sleep that night. I was hearing scratching on the roof, and at one point, a very loud bang and various noises coming from the barn. I was very afraid that I would wake up to my animals missing. The next morning my grandma asked if we heard the loud bang outside that night. She ended up taking my grandpa with her on her morning walk. I have no idea what it was and it haunts me to this day. I was in Northwest Missouri. I believe it to be both paranormal and physical, it was a scary in-between. It was hard to look at.

I believe it wanted us. I was so afraid to look out the window, and I still am. Afraid to see that blank face on the other side of the glass. And on almost every night, the crickets would be chirping and there would at least be some kind of animal noise and movement. But on this night, the world was dead silent and still. It gives me chills just talking about it. I do believe this creature was demonic.

I left this bit out cause it's hard to explain, but you know how heat distorts light? Like on a hot day, opening a car door, releases heat and it casts a slight shadow on the ground. It felt like I was looking at a mirage. Like water that's not there on the road miles in front of you. But close. I would have thought it was a hallucination if everyone else didn’t see it too. it was not hot outside, it was getting dark. The shadows around it were moving, getting closer. Maybe it was the adrenaline or fear making me see things like that. But I do know the thing was real, and it came to the house that night. We could hear it outside and on the tin roof. I'm actually moving back to that farm house by the end of the month. I'm hoping not to see anything like that again.” MM

NOTE: the witness provided a sketch below. These tall white humanoids seem to be popping up more frequently. We still are unsure what these are. Some people call them Rakes, Fleshgaits...even Wendigos. Are they malevolent energies or corporeal cryptids...maybe extraterrestrials? Lon 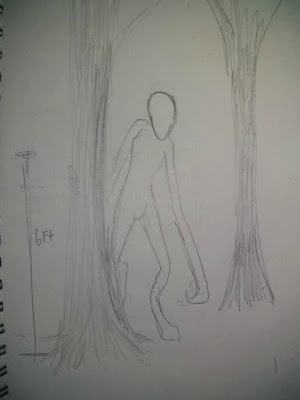