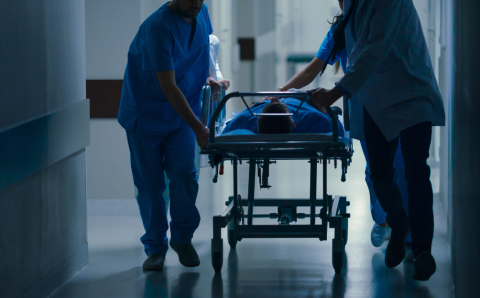 Not really of course.  Single payer is not a blank checkbook turned over to a government agent.  Single payer addresses what is general healthcare and emergency support, but rejects the blank check approach as it should.

What is provides is blanket medical security without it converting directly into a financial emergency.  That is hardly too much to ask and it is what is supplied everywhere else.

It is never a bank designed for the drug industry to mine..

Two Big Problems with Single-Payer Healthcare
The single-payer healthcare system is a healthcare system in which one party is the sole provider of medical services within a society. Generally speaking, the party that manages the single-payer system is the government. In the United States, the idea of a single-payer system has gained support among many Americans under the rallying cry "Medicare for All," which is a political term used to make the proposal sound more inclusive. Yet it is also a term that reveals the government's subtle takeover of the healthcare industry.

What Should We Know about the Single-Payer System?

The main argument in favor of the single-payer system is that the whole medical industry would be solely managed by the federal government in favor of patient interests. Under such a system, every member of society would be directly covered, which means he/she would have access to medical care regardless of ability to pay. All medical costs and expenditures would be directly covered by the federal government — that is, by the taxpayers. Premiums, co-pays, and private insurances would be eliminated; therefore, individuals would not have to pay for medical expenses out of pocket.

The idea seems attractive to many on the surface. However, judging a policy based on its intent rather than the result it produces is the mistake that every society makes in policy decisions. Nevertheless, polls conducted by the Kaiser Family Foundation show that a large majority (73 percent) of the American electorate supports the initiative. These polls have concluded, though, that most Americans don’t realize how dramatically the leading Medicare for All proposals would restructure the nation’s healthcare system.

They just do it by imposing long wait times, cutting off costlier patients, and restricting access to hospital rooms.

These problems are not surprising. From the perspective of economic theory, there are two major reasons why we should expect access to healthcare to be such a problem under a government-managed single-payer system.

One: The Knowledge Problem

The same principle applies to the single-payer system.

Prices are precise signals used to determine the volume of production needed in an industry. Under a single-payer system, there will be no price system, and this lack of prices will distort the knowledge required to determine the quantity of medical services that needs to be produced.

For example, the bureaucrats of the US Department of Health and Human Services, despite their alleged expertise in the domain, do not possess enough knowledge to adequately determine the precise quantity of medical supply that needs to be produced for 325 million inhabitants. The single-payer system theoretically grants everyone free access to medical care, and this access will increase the demand for services but without any mechanism for prioritizing cases.

A shortage of supply will result, creating long waiting lists to see a doctor and a shortage of doctor’s availability. This shortage could increase the rate of mortality, because patients with urgent and chronic conditions will not necessarily be prioritized. For example, in Canada, which is one of the very few developed countries with a single-payer system, patients waited a record of 21.2 weeks to receive treatment from a specialist after being referred by their general practitioner.

Second, the single-payer system will be a burden on the American taxpayer. In fact, the first ten years of Medicare for All will cost $32.6 trillion. These $32 trillion cannot be allocated unless taxes are raised on the middle class and working families. Today, 18 percent of the national GDP is already spent on healthcare (private health spending and government spending combined). Maintaining similar levels of healthcare service provisions under total government control would require immense amounts of government spending and taxation.

Single-payer regulators would no doubt impose price restrictions on services. But the result would only be increased demand without expanded services, resulting in longer wait times and restricted access for certain groups — just as we see in the Canadian and UK examples today. Avoiding significant increases in wait time or cuts in access would require tax increases. Yet, as we've seen even in single-payer countries, taxpayers resist tax increases. And, of course, more spending on healthcare means less spending on other important resources. Since government-mandated healthcare plans generally focus on access rather than cost and quality, the result of this limited tax base for healthcare will be increased costs to patients in terms of wait times and other nonmonetary methods of restricting access.

Ultimately, however, patients will have nowhere else to go. While many Canadians today travel to the US to gain access to care denied to them by their own single-payer system, this option will be eliminated if the US embraces single-payer. Americans would then need to travel to a locale without single-payer, such as Switzerland, to the avoid restrictions imposed by these systems. Needless to say, this will impose large barriers to access to healthcare outside the system.

The wealthy will still be able to afford the highest-quality care. A great many ordinary people, however, may find themselves considerably worse off.
Posted by arclein at 12:00 AM