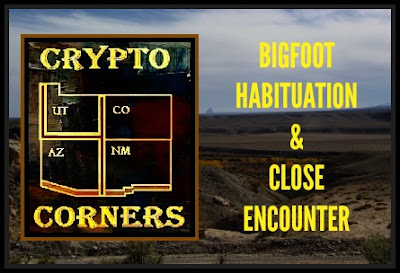 This is a follow up on a recent report and provides background. Obviously the Bigfoot do feed on both the apples and the available corn as well.  add in their feeding the dog and we have all we need to promote first terade but also limited communication as well.

Surprisingly the youngest can make a drawing. This should be encouraged as wll.

Without question we have a readily available tribal grouping quite interested in communication as well. It can also be easily encouraged and the open country allows plenty of stand off observation.

The following account comes from the Jc Johnson archives:

The last time I reported on Jc Johnson and the Crypto Four Corners folks they had announced that a group had been formed with the intentions of submitting Sasquatch hair and tissue samples for a new DNA study. With the assistance of Dr. Christopher, Anthropology Department at the University of New Mexico, the participants had agreed to submit the material as a faction. Many of the participants were previously involved with the Ketchum study. In light of the findings and ridicule of the Melba Ketchum genome results, which Jc and others still believe are valid, each participant agreed to accept the findings of this new study. The hope is that the findings from the Ketchum study are validated by the new conclusions. I make note of the collection of samples because the location I’m about to describe provided many hair samples for the study.

The location is near the San Juan River in the vicinity of the Shiprock, NM on the Dine Navajo Reservation. It is the homestead of George Harvey, including his mother and his siblings. George had previously chronicled the behavior of the Sasquatch during the many years his family has lived on the property. During one particular incident, George observed an adult and two juvenile Bigfoot walk towards the mesa behind their home. Dr. Christopher noted that the face of the mesa may have been at a 45 degree angle. George noted that the Bigfoot easily traversed the steep ascent to the top, in order to gather food in the nearby cornfield and orchard. There have also been incidents of stone barrages on the property. 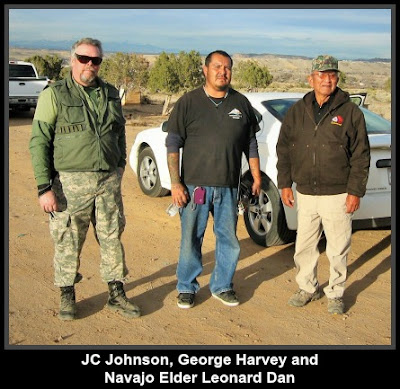 The interview on the daylight encounter video took place on January 11, 2015. George’s sister, Alex, recalls an encounter she had on January 4, 2015 with a group 'furry ones'...part of a larger habituation group that migrates throughout the area. Alex was driving a four-wheeler on the homestead, along with her dogs, when she encountered several huge figures hiding behind a cropping of trees. It was at that point when 3 Bigfoot stepped out, stunning Alex since she had never encountered any of these beings previously. Her brothers had mentioned that they did exist, but she never believed the accounts. In fact, this group of Bigfoot had been researched by Jc Johnson and others in his group for approximately an 8 year period. When Alex told her mother about the encounter, she referred to the Bigfoot has her ‘hairy boys,’ so their presence was well-known.

Alex’s description of the largest Bigfoot was that it stood about 12 ft. and was covered in dark brown hair. Jc later mentioned that the Bigfoot was known by them as ‘Rufus’ and that they had photographs of previous encounters. Alex also said that there was a 10 ft Bigfoot, similar in description as Rufus. The youngest member of the group stood about 8 ft. and had reddish colored hair. She described that each of their faces were mostly hairless with dark brown skin, flat narrow noses and wide foreheads. She also stated that Rufus had large bulbous eyes that may have been 3 inches in diameter. 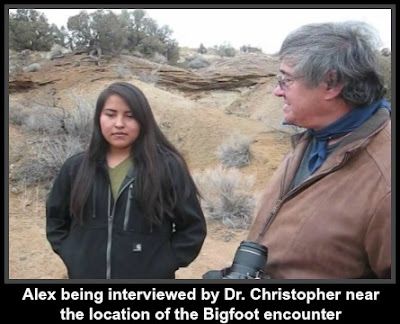 As Alex sat in the four-wheeler, paralyzed from the shock of this encounter, she noticed the 10 ft Bigfoot made a whistling sound. Her dog Zora approached and laid down near the youngest member of the trio. The Bigfoot remarkably reached down and rubbed Zora’s ear. As it turns out, these Bigfoot have previously brought bones of kills to Zora while tied up on the homestead property at night. The young Bigfoot has also been known to ‘draw’ on rocks.

From the information I received from Jc, there are several Bigfoot clans in the general area. Another known group includes a older female who has been seen with several juveniles over the years...at one point she had 3 sons travelling with her. It seems that these hominids are not monogamous and that the female, in particular, had bred with several males in a wide migration area.

At the present time, photographic evidence is being suppressed. There is much more research required on the various clans within the habituation area. This is also tribal land...and all respect to the privacy and customs of its resident must be maintained.

Posted by Lon Strickler at 3:07 PM