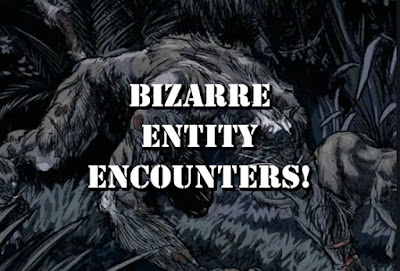 Here we get two likely rear views of two male giant sloths.  The huge muscle groups are showing up.  These creatures happen to be aboreal and usually like to run on their hind legs, but the four footed stance likely provides speed.
The second hairless report my also be a hairless giant sloth as well.   This could have also been after a full moult in the spring and it was dark as well.
The last one is the oddity and reminds us of ancient sculptures. .


This happened in 2016. I'm not sure of the exact date but I do know that it was cooler outside possibly, late fall or early winter. I live in Toledo, Ohio. If your not familiar with that area it basically sits on the border of the Ohio-Michigan state line and about 15-20 minutes from the Indiana border, so around here we just call it NW Ohio. Toledo is very populated city but it also has tons of woods and forest-type areas within the city limits. So even in the city you'll see an occasional deer, fox, skunk, all types of wildlife. To my knowledge Toledo doesn't have bear roaming around especially in the city.


This incident took place maybe a block away from our zoo. Toledo Has one of the best zoos in the USA, but really just known for the Christmas light display. At this time I worked in home health care with MRDD individuals so I would have to work inside the homes for extended hours. My shift was 2-11 pm. Every night I picked my girlfriend up from work around 9 pm and she would just sit with me at work while I finished my shift. Each night when we got back to my job (the house) I would tell my client (MRDD/Resident of the house) to go unlock his house door and turn on the porch light so we could see. So he unlocks the door while me and my girlfriend stayed behind in my car.

Now back then I had 2006 Mercury Grand Marquis And most cars have automatic headlights that turn off a few seconds after you turn the engine off but this car had a toggle switch to manually turn the headlights on or off. So I hit the toggle switch to turn my headlights off and I mean as soon as I turn my headlights off me and my girlfriend saw these two big things just dash down the street ahead. Like I said earlier in the story I am on a residential street parked on the right hand curb side maybe half block but no more than 60-70 yards from the 4 way stop. My car is facing north at this point and the two huge black things came from the east of that 4 way stop running west. Now the direction those things ran was a direct path to Walbridge Park and the Maumee River. I'm sorry if its hard to visualize all of this but I'm trying my best.


What makes this so scary is the feeling that I had as soon as I saw them. I struggled to breathe and I didn't want to breathe too loud or anything. It was just so odd. As far as a description I didn't see any facial features or anything very specific (eye color/shape, lips mouth or nose). I saw a HUGE outline of two big “things” running on all fours.

Although these things ran on all fours in my mind I felt as if that wasn't the natural way it got around, if that makes sense. I never saw them in a stationary position, so while running or galloping it was at least 5 and half maybe 6 feet tall. The galloping and running motion was very elusive and they were running in sync. From the outline it was just bulky/muscular and i could tell this because from what i assume to be the backs or shoulders you could see like huge lumps or muscles. Another odd fact was these things looked to be running with their heads straight down like a raging bull and something was sticking up from the neck/head area. This whole encounter only lasted about 5-7 seconds enough time to see them take about 3 gallops or strides.

After seeing them my girlfriend flipped out. I mean she was calm but she didn't want to be in that car any longer. To be honest we didn't really talk about it once we got inside the house. We had other encounters that made us revisit this one. If I saw those two thing stand straight up I'd guess anywhere from 8-11 feet tall. On all fours it looked like a minivan but bigger not as long as a van just the pure size. JD

“My experience with a humanoid creature. So after discovering this sub I remembered something. I was in the car at night on the way home with my mum about 5 years ago. We were on a dark road and something ran in front of us causing my mum to slow down quickly. The thing was running on 4 long limbs and was not a fox or dog as it didn’t look like it had fur, it looked like a human with really long arms and legs but it was running so fast it was almost a blur. My mum does not believe in ghosts or creatures or aliens but even she was seriously freaked out. We talk about it every now and then and we both agree it was one of the most spooky things we have ever experienced. It looked about the size of a human with very long thin limbs, it was light skin colour but because it was running I couldn’t make out many details. I’m from Glasgow in Scotland, I haven’t heard any legends but I’ve never paid attention. I’m not a superstitious person and we were literally just on our way home when this happened out of the blue.” LS

“My great uncle who saw a creature with a bull's head. My family have had lots of paranormal/supernatural experiences and one of those scary ones was one my grandad told me. He told me his brother had once walked into the path of a human but with a bulls head. He was definite it wasn't someone with a mask or being weird in the woods but he was on his way home from work, this smallish park that has a path leading through to the street, is where it happened. My grandad says he remembers his brother racing back home in an utter panic. I don't know but something about that makes me shiver, I knew my grandad wasn't making it up because my dad's family have a history with the paranormal and so have I. If I remember correctly, he said that the creature was facing away, doing what I don't know and then he turned around as my great uncle approached, and obviously he didn't want to stick around so he went the long way round in the street.” UT
Posted by arclein at 12:00 AM