Rabobank: "World War 3? The US Has Crossed A Red Line... But It’s Not The One They Think" 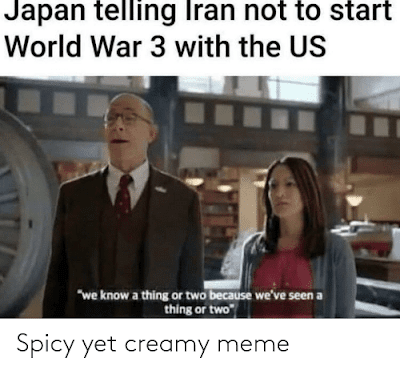 Excellent analysis here.  It understands that Trump's preferred strategy happens to be decapitation and that he is not afraid to use it.

The big stick is back..

So yes, this all means that large scale conventional warfare is mostly out.  The potential collateral damage is also much less as well.

As i posted earlier, i do think that this event was decisive.  Thinks will start changing for the better behind the curtain..


Rabobank: "World War 3? The US Has Crossed A Red Line... But It’s Not The One They Think"

Submitted by Michael Every of Rabobank
https://www.zerohedge.com/markets/rabobank-world-war-3-us-has-crossed-red-line-its-not-one-they-think?

“World War Three!” is trending on social media the day I return to work after two weeks off deliberately not reading any news for once: ironic given my reputation for being bearish about geopolitics. Markets, of course, have failed to react much: Middle-East bourses closed down 2-4% on Sunday, which is not exactly end of the world stuff; WTI futures are up around 3%, again not a real panic; while US 10-year yields were down from 1.94% intraday Thursday to 1.79% as of the Friday close - but the weak US ISM survey (47.2 headline; 46.8 new orders; 45.1 employment) could be to blame for that alone.

You know what? For once the markets are arguably right, albeit for all the wrong reasons. Markets think nothing that happens in the Middle East matters because central banks will have their backs regardless. That is patent nonsense, even if Ben Bernanke is muttering about not ruling out negative rates and further purchases of “private securities” during the next down-turn. If Iran launched a devastating missile attack on Saudi and UAE oil facilities, and means it this time; or on Tel Aviv and the nuclear reactor at Dimona; if it unleashed a wave of global terrorist attacks and assassinations from sleeper agents - none of those things are made better by a lower cost of borrowing. They aren’t even helped by (not) helicopter money, as Bernanke alludes to. Central banks can and would be funding a lot more defence spending immediately on a helicopter money basis in those scenarios, but much of the world economy would take a hit regardless – most so if the oil complex is hit.

Sorry Central banks, but in those kind of scenarios--as Ayatollah Khamenei tweeted to US President Trump right before he then killed Iranian Revolutionary Guards Council head Qassem Suleimani--“You can’t do anything.” So in the case of the PBOC, keep lowering the reserve requirement ratio further to no real effect; or in the case of the FOMC, kidding yourself rates are on hold even as you do more and more NOT QE to keep the ship afloat for now.

“What, no World War Three?” I hear you ask. Well, consider that most of these panicked claims are being made by the same commentators who thought that Clinton had the 2016 election in the bag; that moving the US embassy to Jerusalem also meant World War Three; that the Fed and RBA were raising rates in 2019; and that Russiagate and Ukrainegate spelled doom for Trump. Yes, there ARE real risks of a truly devastating geopolitical scenario playing out; but they are perhaps arguably LOWER for the killing of Suleimani.

Consider this: for years the US has been unable to deal with Iran’s advantage in asymmetric warfare against it, all led by Suleimani. For decades, the US maintained massively-expensive military forces in the Gulf; Iran used low-cost terrorist proxies to prod and provoke and expand its regional influence, all the time knowing the US was unwilling to respond with a Gulf War Three in response as it simply cannot afford another war like the last one on multiple fronts. With the killing of Suleimani the commentators are right: the US has crossed a red line - yet it’s not the one they think.

The new message is simple: the US does not have to rely on sanctions, or conventional war, or trying to rally a reluctant international community to act while Iran runs rings round it. It can simply kill the Iranian leadership or take out their key facilities - as Trump has just threatened to do at 52 unspecified locations if Iran retaliates. (His threat against ‘cultural sites’ is either a war-crime…or recognition that cultural centres in Iran allegedly house cyber-resources for the regime.) As such, asymmetry is now for the US too – and they can do it very well too. This is not to debate the constitutionality or legality or morality of Trump’s move, merely the real politik – which is where market should nonetheless focus.

Crucially, economically-feeble and massively out-gunned Iran does not want a real war with the US even more than the US does not want one with Iran. As such Tehran can either respond to Suleimani’s death by escalating with further US deaths, which triggered this crisis, and in which case war looks more realistic; or it can accept Trump has upped the ante to a level where it will have to make only a token response (against US allies?) instead. In doing so it will lose face domestically, where the regime has already just faced an uprising that has seen hundreds shot and the internet closed down (to no real Western opprobrium), and internationally the limits of tweaking the US’s nose will be made clear to *all* globally. As I have written many times: Si vis pacem, para bellum: if you desire peace, prepare for war. That’s what the US just did.

Hence the market, ignorant as it is about how little central banks can do if things go wrong geopolitically, is arguably right to see only a limited risk-off move so far. That said, Iran is meeting rhetoric with rhetoric and just pledged to abandon the terms of the nuclear deal the US has already walked away from and to enrich uranium on its terms. If Tehran is going for a mad dash for a nuke to try to prevent US military pressure *rather than just pretending to* then we are in for a very wild ride. Yet is Iran really that suicidal? And if so, why did anyone think it was a regime that could be trusted to stick to the terms of a nuclear deal? (I point this out to see if commentators are internally consistent with their World War Three logic.)

Meanwhile, recall fear and greed run markets. Markets are still thinking central-bank ‘greed!’, and rallying, but in one respect it’s US military ‘fear!’ that matters most. The USD is still global top FX dog because it’s top F-35 gun, and that’s true even if Iraq just asked US forces to leave the country. To those who want to buy gold and Bitcoin or CNY as a hedge vs. US power: ‘Who has all the guns?’ And guess who has just shown it isn’t afraid to use them against those who seek to undermine it? In short, if World War Three kicks off, go long USD as you head for the shelters; and if US muscle-flexing prevents World War Three here, it’s even more the time to remember why the USD is still the USD.

On which front, allow me to segue to another story from Friday. The Economist magazine has always been a fan of free markets. Guess what they have to say about the US-China trade deal due to be signed on 15 January? “Don’t be fooled by the trade deal between America and China: the planet’s biggest break-up is underway” - which we have been saying since before there even was a deal. They add ”The threat to the West from China’s high-tech authoritarianism has become all too clear. Everything from its pioneering artificial-intelligence firms to its gulags in Xinjiang spread alarm across the world," while decrying the muddled US response so far. That was just before China’s Global Times reported Beijing will not “sit idle” if Huawei is excluded from Germany’s 5G rollout. Sides are being picked here, just as they are vs. Iran, and Europe is again caught impotently in the middle. This time markets might be right to panic. Even The Economist now gets that the US-China struggle is the main act and Iran the relative side-show – for now.
Posted by arclein at 12:00 AM