Will Chinese troops gun down women and children? 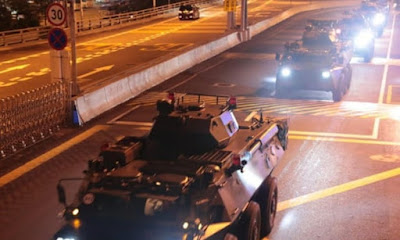 This may well be a a scheduled changeover to bring in fresh units to replace those in garrison.  this does happen all the time.

The problem though is that there is evidence that these units have been getting special training and this must include hardening as well.  The material does quote a major's harangue which is disquieting and strongly suggest preparation to viciously knock down all the protests.

What is deeply concerning is that the turn out of the protesters represent a majority percentage of the population.   This must include huge numbers of women and children.   Any blood bath will be photographed on thousands of cell phones.  Thus an assault on the population will likely see a com-plete shut down of all communication and a bank holiday as well.

This will also be disastrous to the Mainland as well as it will immediately trigger a complete global disinvestment from China and a full blockade of Chinese trade.

This is coming to a head and that is the price on the table.  SE Asia will swiftly become a complete replacement for the Chines factory..


HONG KONG (AP) — China's military deployed fresh troops to Hong Kong on Thursday in what it called a routine rotation amid speculation that it might intervene in the city's pro-democracy protests.

Video broadcast on China Central Television showed a long convoy of armored personnel carriers and trucks crossing the border at night and troops in formation disembarking from a ship. Earlier, scores of soldiers ran in unison onto trucks, which the state broadcaster said were bound for ports and entry points into Hong Kong. A handover ceremony was held before dawn.

"This time the task has a glorious mission. The responsibility is great. The job is difficult," an unnamed major said to troops before they departed. "The time for a true test has arrived!"

The official Xinhua News Agency said it was the 22nd rotation of the People's Liberation Army's garrison in Hong Kong. The previous one was in August 2018.

Nearly three months of fiery anti-government demonstrations have sparked concerns that the military will be deployed in the semi-autonomous Chinese city. The Hong Kong garrison earlier published a promotional video with scenes of soldiers facing off with people dressed like protesters.

A leader of 2014 pro-democracy protests in Hong Kong said the city's government is using the same tactics as five years ago.

"The government is just trying to threaten people with emergency law, with the entrance of the People's Liberation Army," Yvonne Leung said at a news conference.

A former British colony, Hong Kong was returned to China in 1997 under a "one country, two systems" framework, which promises the city certain democratic rights that are not afforded to the mainland. In recent years, however, some Hong Kong residents have accused Beijing of steadily eroding their freedoms.

The newly arrived Chinese troops have been educated on Hong Kong's laws and vowed to defend the nation's sovereignty, Xinhua said.

"We will firmly implement the guideline of 'one country, two systems' and the Basic Law and the Garrison Law of Hong Kong," Liu Zhaohui, the garrison's deputy chief of staff, said on CCTV.

The Garrison Law allows the Hong Kong-stationed troops to help maintain public order at the request of the city government. That has never happened, and Hong Kong authorities have said they can handle the situation themselves.

The Xinhua report on the previous rotation in August 2018 did not mention "one country, two systems" or national sovereignty.

Wang reported from Beijing. Associated Press videojournalist Johnson Lai contributed to this report.
Posted by arclein at 12:00 AM