Everything tells us that China has been building a bubble economy and even extending it globally.

What supports it is printing money or advancing more credit.  The question is how do we cash flow that economy to actually support the debt?  That may simply not be possible.

Again the CCP has chosen to ignore the credit business cycle while continuing to add interest to debt.  Our own experience has been with sudden collapses followed by a quick rebound that allows all stranded loans to be written down to free up fresh equity

At this point, a massive write down of non performing bank assets is surely called for followed by divesting assets with application of fresh equity.  The CCP does not like to divest and their past failure is not conducive to attracting new equity partners.  They find it impossible to close out losers....

China’s Biggest Problem Isn’t Trump, It’s a Broken Banking System
This week the Bank of China announced a devaluation of the yuan to roughly ¥7 to $1, a par last seen in April of 2008. The Trump administration retaliated by designating China as a currency manipulator, a move Washington has long threatened but had never acted on.

The irony here is that China had been artificially propping up – rather than holding down – its currency for years, with some analysts contending that the yuan would fall 30-40% if allowed to float on the market. As one may expect from a political conflict, the move was less about facts and more about positioning as the trade war between Trump and the Chinese Communist Party (CCP) continues to escalate.

The market’s reaction to the re-engagement of this battle of wills between the world’s two largest economies is itself telling. Monday’s massive sell-off suggests the market had expected some sort of grand agreement between the two countries. Perhaps Wall Street thought Trump was desperate for a deal going into election season, or that political pressures in Hong Kong would soften Beijing. In any case, the rose-tinted glasses of financial markets highlights a more fundamental problem – they still think Trump’s trade policies pose the greatest risk to China’s economy.

Make no mistake, Trump’s tariffs have been a thorn in Xi’s side. Not only has it impacted Chinese exports to the US (down almost 8% in July), but – perhaps more importantly – the retaliatory tariffs on American goods (particularly agricultural products like soy and pork) have contributed to rising food inflation within the country. This rising costs of living, coupled with slowing economic growth – which Xi has dubbed “the new-normal” – certainly brings unique pressures to the Communist Party.

This is all, however, a lesser threat relative to China’s real issue: a banking system in crisis.

Two months ago, the Chinese government took over Baoshang Bank, a small Inner Mongolia-based institution. What’s noteworthy about this is not simply the actions taken by the government, but the fact that it was news at all. While the Communist Party certainly had the ability to keep their actions secret, with many speculating there have been similar takeovers in the past, they made sure to alert the financial press of their actions. Officials even chose Reuters, rather than a Chinese publication, for the announcement.3

Some have speculated that the actions by the government were meant to send the signal that the CCP is aware of larger problems in its regional banks and is prepared to take action should it need be. In fact, the government followed up this takeover with the establishment of a new deposit insurance program in order to “help financial institutions cope with risks and introduce an exit mechanism.”

At the end of July, another bank found itself in a crisis, this time the larger regional Bank of Jinzhou. Though designed differently than the explicit takeover of Baoshang, once again the Chinese government had to come to the rescue via state-backed financial institutions purchasing stakes in the failing financial institution.

While it’s perhaps possible Baoshang and Jinzhou are isolated incidents within the country, many China analysts are warning this is just the first tremors of an over-leveraged financial system beginning to suffer the consequences of years of artificial credit expansion.

After all, the country has undergone massive expansion of credit  in the past decade. Since 2008, China’s total debt to GDP has nearly doubled, surpassing 300% to GDP in 2019.  Given that the world is awash in high debt levels, it may be easy to tune out these sort of numbers, but there are a variety of reasons why China’s debt levels are particularly troubling.

For one, the largest driver of Chinese debt is less government but corporate debt. In 2017, non-financial corporate debt was almost 160% to GDP according to the IMF. (For comparison US corporate debt, itself high, stands at 48% to GDP.)  Even more troubling, within that is the fact that state-backed firms have been the most aggressive in taking on risk, accounting for 85% of all traditional loans made in the country.

Similar to American GSE’s in the lead up to the financial crisis, the state-backing of these firms have given these companies a competitive advantage in credit ratings, helping to crowd out private firms access to loans. Of course, it is precisely these state-backed firms who are less interested in profitability rather than fulfilling the desires of local government leaders. The result is that many of these loans were taken out for projects that would never be profitable. It is debt that will simply never be paid off.

There are other reasons why China’s debt situation is potentially more volatile than other countries.


The Chinese debt is overwhelming not because of the volume—more than $34 trillion —but because the figure has quadrupled in seven years (2007–14)...Not only the speed of the growth of debt, but also the debt’s composition is a concerning issue. Almost half of it comes from the real estate sector and related industries, and at least another 30 percent is the product of shadow-banking intermediaries, whose financial discretion is highly doubtful.

The aforementioned shadow banking is another issue that has long worried CCP officials.

Shadow banking involves financial institutions – often traditional banks – offering retail customers higher yields by taking deposits for what are called wealth management products. This money is then bundled and lent to companies that could not obtain a traditional loan. These products have been extremely attractive in the country due to their ability to pay out more than traditional bank accounts.
The very nature of shadow banking carries with it more risk than the traditional banking system. Given state-firm dominance of traditional loan markets, shadow banks have been a desperately needed source of credit for private firms, but at a higher cost. While Beijing tried – successfully – to slow the growth of the sector last year, they have abandoned these efforts in the face of the present trade war leading to growth in 2019.

To bring the story back around to the previously mentioned bailouts, much of the shadow banking industry occurs in the form of trust projects by regional banks, such as the Banks of Baoshang and Jinzhou. At the time of its takeover, it was believed that shadow banking investments made up 25% of Baoshang’s assets. Meanwhile, Moody’s warns that risky trust assets are growing rapidly within that class. 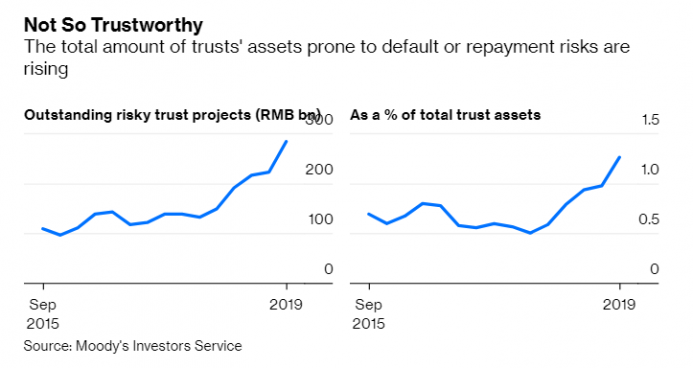 An additional red flag exists in that Chinese bank balance sheets are particularly convoluted. As Bloomberg noted, complicating Jinzhou’s bailout is the fact that the firms “books are so muddled that it still hasn’t been able to disclose its 2018 financials.” Further complicating matters is general distrust within Chinese auditing firms and the reliability of financial statements within the country, as the Wall Street Journal reported earlier this month. So the quality of these loans – in both the traditional and shadow banking system – is a huge question mark that Chinese regulators are having to work out as they step into these institutions.

All of this helps illustrate why there is heightened concerned over China’s banking system.

Further, the failure of these firms has consequences for their peers. In the immediate aftermath of Baoshang’s bailout, we saw a dramatic rise in interbank lending rates and collateral requirements as large banks became more cautious with loans to similar-sized institutions. In fact, China’s “big four” banks saw their valuations fall to record lows this week as expectations rose that they would be asked to bailout smaller institutions in the near future, a sign that it’s widely believed that bank panics are far from over.

How many of these institutions are in trouble?

Kyle Bass, a hedge fund manager who has long warned that the Chinese banking system is underfunded, has claimed that there are “almost 500 banks in China that are labeled troubled by the government itself.” If true, it’s possible the CCP could soon be facing its greatest financial crisis in the modern era.

While it’s particularly difficult for an outside to have a solid view of China’s true economic strength, there is a strong reason to believe that the country faces a highly leveraged banking system full of loans of questionable quality and mounting defaults. While much of the media remains focused on Trump and trade, the greatest threat to the Chinese economy may be reckoning with a massive financial bubble from within.
Posted by arclein at 12:00 AM