The Role of Iran 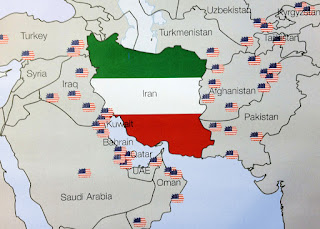 This comes by way of an Russian Intel informant.  Thus we can get a different perspective.  That is always helpful.

What it discloses is the continuing NAZI MEME which has been continuously funded by the monied elite who follow an agenda that is best described as stupid. Yet because of their money and real influence, they have over and over again promoted wars into existence.

They are attempting to use Iran as a trigger.  The real conflict desired is against China which must draw in India as well.  Such an imagined conflict could easily kill over one billion people.  The problem is that the CCP and the Mullahs have bought in.  The USA is now actng to prevent such an outcome.  After all such a war will likely collapse USA global hegemony as was done to British hegemony by the same monied types..

In both cases, they have to eliminate the NAZI proxies while preventing damage to the people.

What makes this all absurd is that Modernity will be complete by 2050 and the global population will actually be falling unless we intervene to maintain growth or at least stability....

The Role of Iran

Daniel Estulin, author of In the Shadows of a Presidency joins The Power Hour host, Daniel Brigman to discuss what's really going on behind the scenes in the world. Estulin spent 24 years in Russian military counterintelligence and he's not a conspiracy theorist.

I've transcribed the first part of this interview, which begins with a discussion of Iran, with a very different telling of 20th century Iranian history than is ever told in the West. An Iranian friend actually brought this clip to my attention, saying that this version was accurate from his point of view.
Daniel Estulin: To untangle the truth about who and what this Iran situation is, we need to look behind me closed doors of the world's most powerful and prestigious banks, oil companies, industrial corporations and also into the high-rise boardrooms of the elite clubs, such as New York Council on Foreign Relations (the brother organization to the Bilderbergers) [and the] Royal Institute of International Affairs in London...

Iran is the battleground for a behind-the-scenes war that is still raging among international circles of high finance and their friends and the various intelligence services of the NATO alliance countries, Israel and the Middle East.

The planners behind the operation to put Khomeini in charge of Iran were the Club of Rome, the most important institution in the world that supports the Malthusian depopulation scheme, the Institute for Policy Studies out of Washington, the Tavistock Institute of Sussex England, the Aspen Institute of Humanistic Studies and the Society of Jesus - the Jesuits, not to mention the Sociology-Anthropology complex at the Sorbonne University in Paris, where so many intellectuals, Left-leaning intellectuals came from.

The Club of Rome and its associates implanted in Iran a network committed to the de-industrialization of the nation. This is what the Club of Rome has been doing since in 1970s. Again, please understand, popular conspiracy theories aside, Iran was not the victim of some Communist conspiracy, nor was it committed to an ideology of revolutionary exportation.

If you look at all the characters behind it...the Communist conspiracy interpretation of the Iranian disaster - it's an interpretation peddled by the British intelligence circles - just as the same British intelligence circles peddle the conspiracy between Putin and Donald Trump in the United States - the conspiracy, which has been shown to be a vile conspiracy on behalf of British Intelligence. So, if you look at the stuff behind Iran, you're looking at the British Intelligence. They still hold sway among important supporters of the former regime.

It's also necessary to present an overview of the Club of Rome, its operational policy for Iran and its resources for creating this Jacobin revolution, which we've seen not only in Iran but in other countries, which later became known as the "Color Revolutions".

So this oligarchical group perspective for Iran in the period between 1968 - that's the "Flower Power", "Sex, Drugs and Rock 'n' Roll" and the 1975 period, that's the Vietnam War - was to build up the country, Iran in this case, as an armed entity capable of carrying out their geopolitical crisis management policies, where have we heard this term before?

So, when NATO alliance launched the Club of Rome in the late 1960s, the aim was to usher the advance sector into a Post-Industrial Era, which is what we have right now, with the argument that industrialization threatens to deplete the world's scarce resources. Where have we heard that before?
So, a series of operations, starting with the 1973-1974 oil [crisis] hoax enforce the argument. Then, you have the "Limits to Growth" propaganda, in the words of Club of Rome founder, Aurelio Peccei.

It was part of a shock treatment, designed to prepare populations for supranational resource allocations by the club of Rome's affiliates in NATO and also the United Nations. Then, you have student street gangs who were funneled into some of the late 1960s ecology movements around the world, you know, Greenpeace, World Wildlife Fund and other counter-cultural cults.

The essential to this effort was discrediting nuclear-based industrial development - and its leading third-world proponent, the Shah of Iran. So, when you hear things, like "the Shah was a dictator", it's typical propaganda. "The Shah was bad", so you have these crazies come in, you know the mullahs and the ayatollahs.

Actually, the Shah was very good, because his whole concept was developing Iran into one of the leading nations in the world, one of the top 10 leading nations and world, using their net oil resources and its geographical position as a spearhead for this development, something that the NATO Alliance, the elite circles in London or Washington simply couldn't permit and what we have is today the continuation of that, except new players have basically come in and they're doing the bidding."

Daniel Brigman: Let me summarize this - there's a lot of information - let me summarize the key points. You correct me where I'm wrong...Iran it was starting to develop, the Shah wanted to develop, [the Liberal banking establishement] wanted to de-develop Iran and to leave it there, basically as a powderkeg to use at their whim. They did that; they came up with the oil hoax, they came up with all these kinds of things; the de-industrialization of the country, to the point where it was controlled so much that it was used by the CIA to really hurt the Carter Administration and bring Bush to power, who was the former head of the CIA.

And so, Iran sits there, right now as a shell of what it possibly could be, really as a pawn of the global plan of control and Communist control.

Daniel Estulin: That's a very good summary, yeah. Just a couple things I wanted to add. The driving force behind Iranian industrialization was oil production, as I said, under the direction of the National Iranian oil company and in 1970, probably it was the biggest Petroleum Corporation in the world.

Now, during the 1970s, the Shah battled the British-dominated oil cartel that for decades had controlled Iranian oil...in the '70s and the '60s, Iranian oil was controlled by BP, British Petroleum. By October 1978, the talks had collapsed over a British offer, quote unquote, which demanded exclusive rights to Iran's future oil output, while refusing to guarantee purchase of the oil.

So, the Shah's refusal to submit to London's draconian terms for renewal of this 25-year accord that expired in 1978 was a crucial factor in the decision of the British to bring down the Shah and install a fundamentalist lunatic, Ayatollah Khomeini.

Now again, we hear a lot in the media about Islamic Fundamentalism and all that kinds of stuff but if you really ask people what is it, nobody understands...When you talk about fundamentalists, they immediately associate with some crazy dude wearing a bedsheet with long hair and a long beard, you know sandals and screaming some nonsense, wanting to cut people's heads off, which has really nothing to do with with Shiites and Iran.

Out of the many different reasons...to bring Khomeini into power had to do with the conspiracy to create a unified fundamentalist Islam. So, what is Islamic fundamentalism? It's essentially a pre-Islamic, irrationalist cult, created on the basis of ancient Sufi belief and brainwashing structures insinuated into Islam.

Moreover, this revived Sufism is the key to a broader fundamentalist revival, affecting Christianity, too. Because again, the common goal of this revived Sufism, whether it's in Islamic or Christian garb is the destruction of the modern nation-state. As in the case of Europe, the idea to create a pan-European Union, devoid of nationalistic tendencies and also unified under one flag, constitution, currency and ideal - where are we seeing that, again? We're seeing in Europe.

So, Khomeini's movement was the outgrowth of attempts to unite Islam in the 1930s and the 1940s, under Hassan al-Banna, a Nazi who was very close to Adolf Hitler. So, through the Iraqi Shiite, Nawab Safawi, one of the extremists in the Shiite movement, the shadow organization, Fada'iyan-e Islam was created as the Iranian branch of the Egyptian Muslim Brotherhood and Khomeini's godfather, Ayatollah Kashani met with Hassan al-Banna, again a Nazi, devout Hitlerite and Nazis in 1914 in Cairo to discuss the reunification of Islam.
Posted by arclein at 12:00 AM