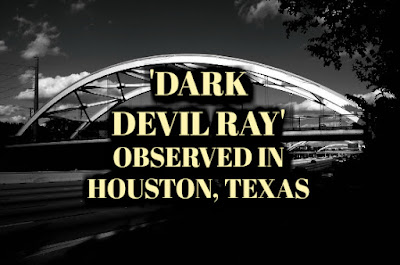 This report is extremely important.  The creature demonstrated clear gravity control through its delta shaped wings. My own first exploration of gravity was triggered by a russian expert on butterflys of all things.  His close observation allowed him to essentially unlink aerodynamic flow from lift.

Thus the flying rays actually depend on gravity control in order to fly as well as they do.


This has never been clearly understood, but has still been evident but not accepted.

You mentioned the sighting was possible the biological alien craft. I looked into this for a bit. I gather the distinction that the Manta Ray biological craft is quite possibly different from the Dark Devil Ray I saw back in April 2004. This creature I saw for about three to four seconds was more of a E.B.E. / crypto-creature. This creature was spotted in uptown Houston under the Dunlavy Street bridge about 10pm to 10:30pm back in the year 2004. I'll tell you how I spotted the DDR.

So then the Dark Devil Ray made its appearance. What I saw was astonishing. The DDR with wings up levitated from the ground to underneath the bridge. Never did the DDR flap/move its wings. The movement was from left to right up and diagonally to under the bridge. I was astonished and bewildered that I saw with my eyes fixed upon it. The wingspan from upturned wing left to right was about ten to twelve feet. The DDR length from head to tail was no more than ten feet. I did not see a whip tail, I did notice that the creature was completely black. Darker than the surroundings. The DDR seemed to do nothing more than levitate from the ground to underneath the bridge. My complete view was a profile view from 50 to 75 feet from the DDR. I did not see any glowing eyes, the DDR was completely black.

Noting the manta ray UFOs, I turned on the YouTube and other sources to distinguish the difference or similarities.

Thanks for reaching out, I have waited 15 years to talk about this DDR sighting.