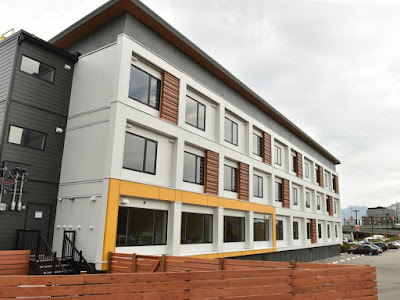 The fundamental problem for cities is that success produces land price and condo price appreciation all based on a cushion of dead money in the form of land values or Strata title.  This drives citizen costs upward in a form of speculation that is shared out across time but not equally.

A viable solution, and we see plenty of experiments going in that direction is that we build land independent housing.  We may even allocate land blocks as part of development contracts in order to generate space.

We already have plenty of commercial mobile housing and design improvement is obvious as well to minimize raw costs.  The key point is that it is no trick to produce a sturdy foundation ( steel ) frame to set on a simple paved gravel bed that will not need to resist rolling loads.  Temporary water, power and sewer connections is no trouble either.

Central though is that the land can be allocated in five year blocks without serious fuss.  Considering that a cleared lot takes almost five years to clear a development permit, we almost have a solution as well.  It suddenly becomes the decider in the permitting process.  An A permit will be granted after such a five year latency period.

What is central is that housing units are completely mobile and cost under $50,000 and that means interest and amortization will be over twenty years for the building and this is enough to produce a monthly payment under $200.

All of a sudden we no longer have a homeless problem at all.  even better, cleared sites are immediately occupied by any number of such units easily to two stacked and side by side to fill up even a small lot with ten to fifty  units and fully justifying care and maintenance.  Because they are naturally temporay, no neighbor is inconvenienced for more than several years which eliminates the threat of value loss.

The central driver of homelessness is that developers have naturally pushed all social costs back to the governments who cannot really respond dynamically.   This solves that problem by producing a large inventory of low cap housing that can be owned by the residents as well.  Beats sleeping in your car.

Once a such a system is established and focused on land been cleared for multi family building, a large inventory of such land will open up and be continuously available.  This also allows such land to be banked as well.

Such a solution in hand allows the whole development dynamic to be much better managed as well.

add something else.  we can use most rooftops for these temporary houses.