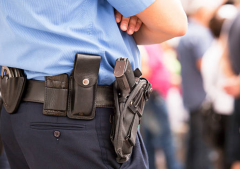 There are obviously serious deficiencies in law enforcement protocols that generate these sorts of outcomes.

This has to be addressed at all levels and not piecemeal.  Before all this though it is necesaary to completely end the criminalization Meme realated to all forms of drugs in order to extract the enforcement system.

This may well allow a substancial down sizing. This also holds true for homeland security once it is clearly understood that false flag Meme was used to impose it.

It will not be too difficult to within the next decade to use persuasive passive surveillance to intercept crimanal potential as a matter of course.  This is going to happen anyway.  Criminality can become simply too difficult and we can also eliminate economic necessity through the elimination of poverty.

Other that that, it is absurd that we have allowed our police training to generate a paramilitary that lacks the discipline to never be trigger happy.    Swat Teams for a simple drug bust is absurd.


When Israel Leija, Jr. was picking up food at a drive-through in 2010, police officers approached his car to arrest him. Leija was guilty of violating his probation, and when the officers informed him that he was under arrest, he sped away. For the next twenty minutes, Leija led the police on a high speed chase.

During the chase, the police used standard tactics to stop Leija. Anticipating his possible routes, they deployed tire spikes in three different areas. But one officer, Chadrin Mullenix, decided to think outside the box. Despite never having been trained to shoot moving vehicles, Mullenix asked permission from his supervisor to fire his M-4 rifle from an overpass at Leija’s engine block. He neglected to wait for a response, though, before taking the initiative. He fired off six rounds, none of which hit the engine, but four of the bullets hit Leija, killing him. After the shooting, Mullenix said to his supervisor, “How’s that for proactive?” in response to an earlier criticism from his supervisor for not taking enough initiative.


In the case of Mullenix v. Luna, Officer Mullenix was acquitted on charges of excessive force on the grounds of qualified immunity. Prior to the case Harlow v. Gitzgerald in 1982, qualified immunity was essentially “good faith” immunity; as long as officials believed “in good faith” that their actions were legal, they were protected from lawsuits. Harlow rejected the good-faith clause—which depended on the subjective evaluation of the officer—so that the only “qualification” for qualified immunity was that no “clearly established” law was violated. At face value, the subjectivity of the good-faith clause appears to provide an open-ended defense for police abuses, but by eliminating this condition, police officers actually gained even more immunity from liability.


In the case of Mullenix, the comment “How’s that for proactive?” would have demonstrated that he was not acting in good faith when taking the initiative to fire recklessly at a moving vehicle. Instead, the lack of any law specifically prohibiting his actions in unique circumstances was sufficient to grant him legal immunity. Given that statutory law cannot reasonably anticipate all the unique circumstances that officers will face, nearly any abuse of power meets the criteria for qualified immunity, even in cases in which an officer brazenly defies reasonable expectations for appropriate conduct.


The case of Philip Brailsford is an even more remarkable example of how qualified immunity serves as a license for police abuse. After customers of a La Quinta Inn mistook a pest-control gun for a weapon, the police were called in to investigate Daniel Shaver. When they found him, unarmed and drunk, Shaver was not violating any law. But Officer Brailsford, while wearing a body camera to record his activities, ordered Shaver to the ground and proceeded to play a sadistic game of Simon Says. As he pointed his AR-15 at the drunken father of two, Brailsford gave a series of rapid-fire “Simon Says” orders, telling Shaver “If you make a mistake ... there’s a possibility you’re going to get shot.” Unfortunately, as Shaver tried to follow the orders, crying and begging not to be shot, he did make a mistake—reaching back to pull up his sagging shorts—and Brailford pumped five bullets into him.


Like Mullenix, Brailsford was clearly not demonstrating good-faith discretion in his interaction with Daniel Shaver. Intoxicated with power, he was playing a cruel game that ended with the murder of a man who had violated no laws. All of this was captured on video. Inscribed on the gun he used to kill Shaver were the words “You’re fucked”—which the judge ruled to be inadmissible in court, consistent with the Harlow ruling that tossed out the good-faith clause. All Brailsford had to demonstrate was that he was not violating any clearly established law, and of course, there is not statute prohibiting a police officer from murdering somebody for failing in a game of Simon Says. Brailsford has since been acquitted and, after claiming to have PTSD from the slaying, is currently enjoying a retirement pension (he was twenty-six years old when he killed Shaver) of $2,500 per month.

The doctrine of qualified immunity essentially says that for a police officer to be held accountable, there must be a statute specifying all the particularities of his or her unique situation. Anything even remotely ambiguous falls under the broad category of “discretion.” In theory, legal immunity is “qualified,” but in practice, it is effectively absolute.


In the most recent case, occurring only weeks ago, a team of police officers in Georgia stormed the property of Amy Corbett. The officers were chasing a suspected criminal, and Corbett and her children had the misfortune of living near where the suspect was thought to be. While the children were playing outside, the officers made them lie down while guns were pointed at them. When the family dog, Bruce, approached the officers—showing no signs of aggressive behavior—Officer Michael Vickers did what thousands of police officers have done in similar situations: he fired on the family pet.

While the slaying of a beloved pet in front of children is horrifying (and not uncommon in these situations), Michael Vickers failed to kill the dog. When he fired his weapon, Corbett’s ten-year-old son was less than two feet away from Vickers. Somehow, Vickers fired his weapon so inaccurately that it landed in the knee of the boy lying only eighteen inches away. Unsurprisingly, after their son was forced to lie “for an extended period of time” in excruciating pain the family sued. Just like Mullenix and Brailsford, Officer Vickers was granted qualified immunity from the suit.

In cases such as these, qualified immunity does more than merely protect bad officers. Lawsuits serve two functions: they deter reckless behavior (such as firing a weapon while a child is less than two feet away, for instance), but they also provide restitution for victims. For Shaver, who provided for a wife and two children, restitution would be meant to compensate the family, at the very least, for the financial loss of a primary income-earner. In the Corbett case, the family remains fully responsible for the hospital bills to treat their son’s knee. Qualified immunity protects dangerous cops while simultaneously blocking any avenue for the victims to relieve even some of the consequences of police abuse.


There are several layers of negative incentives built into the criminal justice system. Civil asset forfeiture, for instance, encourages police to seize property from law-abiding citizens on the flimsiest of grounds, with scant recourse against bogus claims. But qualified immunity arguably serves as the most dangerous of the perverse incentive structures governing the police. Through legal evolution, the protection offered has expanded to an absurd degree, where an officer can record himself murdering a man as part of a sadistic game only to be rewarded with an early retirement. Police officers enjoy an almost untrammeled liberty for brutality, theft, and murder—those who do not abuse their authority restrain themselves not because of institutional structures, but despite them. Qualified immunity is the clearest example that the rule of law is dead (or, perhaps, never existed); government officials live by one set of rules, and the rest of us live by another.
Posted by arclein at 12:00 AM