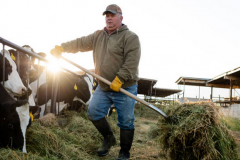 Well maybe not as well.  Population involvement is needed to properly work the land. That does not have to involve a lifelong commitment though.  youth training in particular is valuable as is using carreer breaks or cessation.

We have had a drive for productiivty which is progressively counter productive as it typically mines the land.

transporting food products is important and valuable but control needs to also remain distributed to local producers.  This actually happens in all commodities including razor blades.

For decades, politicians and pundits in political media alike have said that the American farming and ranching industries are vital to our nation and must be protected from "unfair" competition and the threat of going out of business. This belief often materializes in the form of legislative or executive action undertaken by the government.

The federal government has long sought to promote the health of these industries, employing pro-farming policies since the days of FDR's New Deal. These programs survive to this day, being expanded from their initial scope or their original sentiments reimposed through new acts of Congress. Strangely enough, this bureaucratic expansion occurs despite American agriculture output declining over the course of America's existence.

The US now imports a large percentage of the fresh vegetables and produce it sells — while in 1975 the proportion of fresh fruit sold in the United States that was imported was 23 percent, it reached 51.3 percent in 2016. 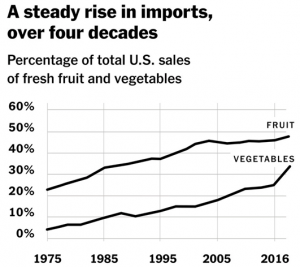 Domestic vegetable and fruit producers are being supplanted in the market by producers from countries such as Argentina, Chile, and Mexico. The City University of New York's Urban Food Policy Institute reports: "...since the NAFTA Trade Agreement in 1994, U.S. consumption of tomatoes, peppers, cucumbers, limes, berries, avocados and mangos imported from Mexico is way up and still rising."

Clearly, increased trade is impacting America's agriculture sector. Surely then, the government's relationship with the industry must be changing as well. Logic would suggest that the USDA and its subordinate agencies are laying off employees and reducing their size and scope in response to the decline of America’s beloved industry.

In reality, this is not the case. In 1900, 11 million Americans were employed on farms and 2,900 employed by the USDA. A century later, 3 million were employed on farms, while the USDA employed 105,000 workers. This increase in agency size represents the Federal government's increasingly regulatory stance in the US economy.

How could an industry's death spell prosperity for a nation? While the number of people employed in farming and similar occupations dwindled from 11 million in 1900 to 2.6 million in 2017, employment in STEM (science, technology, engineer, and math) occupations has grown 79 percent between 1990 and 2016 — increasing from 9.7 million to 17.3 million. The US economy is transitioning away from producing in primary and secondary level industries like agriculture and related enterprises such as food processing and packaging.

The reduction in the number of people employed in agriculture and related jobs shows that America is actually abandoning low paying jobs. Compared to STEM jobs, occupations in the primary or secondary sectors of the economy tend to pay a very low wage. Farm hands and field laborers, who are often poor immigrants, are paid below minimum wage to perform tasks that take a significant toll on their bodies. Difficult manual labor poses both short-term and long-term risks to workers’ health, compared to the almost complete lack of health detriments presented by jobs in STEM fields. These agricultural jobs tend also to be seasonal. Workers will only have a secure source of income for between 3 and 6 months per year, depending on where they work, due to the fact that crops cannot be grown year round.

As the economy sheds the last remnants of its agricultural-centric past, new jobs are being created in new industries at a rapid pace. Occupations in the tertiary and quaternary sectors are far more beneficial to society and individuals, as they provide higher wages, a more stable source of income, and employment year round. In a bid to attract workers to fill positions, companies often offer benefits such as childcare and healthcare plans as part of an offer of employment. It is very obvious that we should seek to employ as many people as possible in tertiary and quaternary sector industries.

Primary and secondary products will never lose value. Humans will always have a need to consume agricultural products and build devices and structures from raw materials that are finished through secondary sector activities. As the US economy begins to be largely constructed of tertiary and quaternary economic activities, these lower-level processes will simply be outsourced to less developed countries.

Since their ideology became a force in the mainstream a decade ago, the rallying cry of political leftists has been to stand for those being oppressed, exploited, or victimized by the status quo. The advancement of technology has meant that industrialization, combined with other factors, has left certain nations behind. Third world economies are not nearly as developed as their first world counterparts, with a bulk of their economic activity taking place in the primary and secondary sectors. These leftists take an anti-trade stance, positing that the outsourcing of production to less developed nations is capitalistic exploitation.

While it is true that a business owner may outsource simple manufacturing processes to countries where they may hire workers at cheaper wages, it is also true that the workers hired benefit from this self-interested move. The reason workers choose to work in these plants and industries is that they provide the best possible way to make money to the worker. If a corporation goes to a less developed nation and is able to hire 5,000 workers to work for them, it means that the firm is now offering the best employment opportunity in the country to 5,000 workers. Prior to the company's arrival, laborers were likely making less money than they now do and working in worse conditions. Otherwise, why would they choose to work for the new company? Their condition has obviously been improved by the opening of a plant by a foreign capitalist.

Just as the worker in the third world country benefited by the opening of a multinational corporation's facilities in their country, the citizens of first world countries benefited at the same time. Countries in the business of producing primary and secondary products tend to hold a comparative advantage in their production because they are able to produce more efficiently and at the lowest cost. They can manufacture, farm, ranch, and fish more efficiently than their counterparts in economically and socially advanced nations.

Instead of allocating resources to the production of goods that firms in other countries can make at a cheaper and more efficient rate, developed nations should be pursuing the expansion of tertiary and quaternary industries. Engineering, health science, computer science, and entertainment are all industries the US should find itself at the forefront of. The US is far better equipped to produce these goods and services, and these industries provide the best jobs to the nation.

Dole should be producing its crops in Panama. It provides jobs to the locals that are more secure, safer, and better paying than the ones they previously held, the goods are produced at a cheaper and more efficient rate than if they were grown here, and allows individuals in the US to be employed in higher paying sectors. Instead of working as a farm hand in the Hawaiian fields of a Dole plantation, a person could be employed as an accountant or sales executive in one of Dole's corporate offices. While it may take some time for a former field hand to learn the skills needed to be employed in a higher income industry, the goal is achievable and future generations will be better off for it.

The government must take policy positions that encourage the boom of tertiary and quaternary industries such as computer and software design, legal professions, financial institutions, and healthcare. Subsidies to farmers and other outdated, primary and secondary economic activities should be cut, paving the way for a transition to a more advanced economy. Corporate tax rates should be drastically reduced to fuel the growth of firms in these sectors. The US must also abandon its protectionist stance on trade. Tariffs increase costs on domestic consumers and prevent producers in third world nations from bringing their goods to market in developed nations, who more often can afford the products.

Within a decade or less, those displaced by the closing of companies in the agriculture industry, among others, will find themselves in new, higher paying fields. Better yet, their children will too. Leave the agriculture to those who can do it best, and let advanced economics revolutionize the higher paying industries.

Indri Schaelicke is a contributor and Managing Editor at 71Republic.
Posted by arclein at 12:00 AM