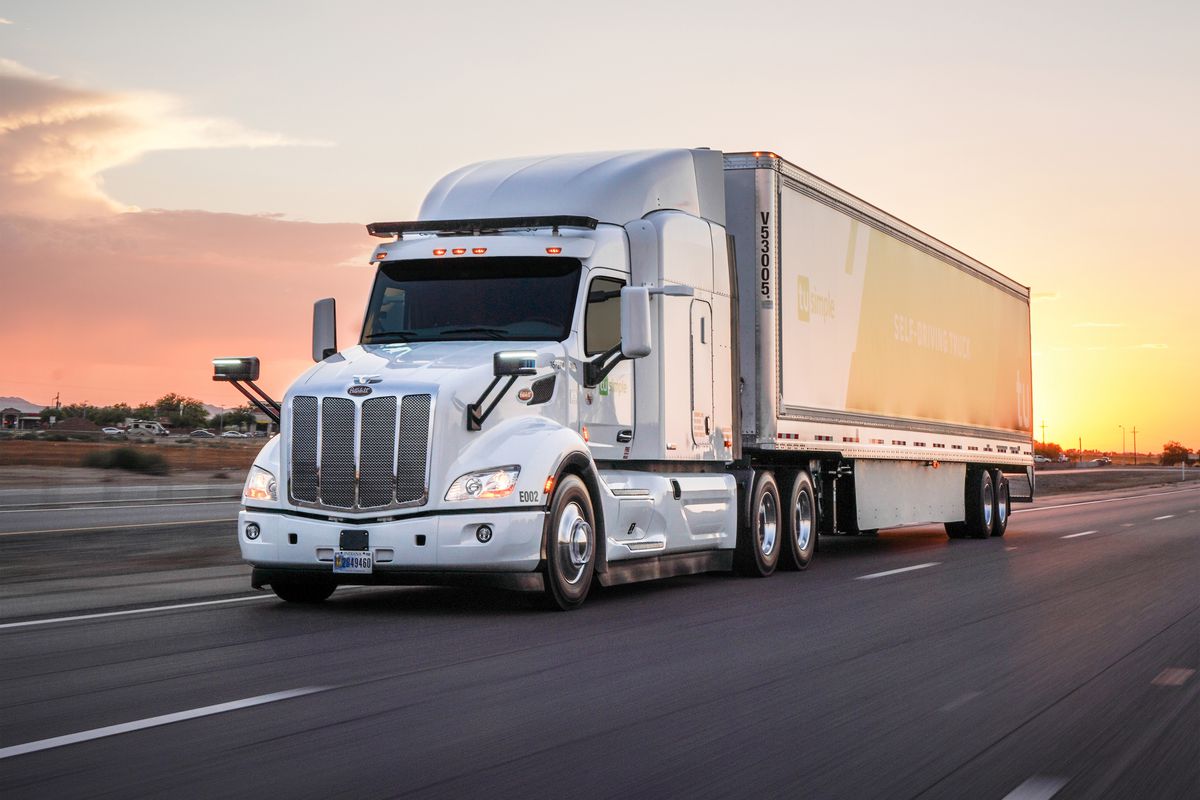 Yes this is the way it will appear in our universe.  Then it will be other established long haul routes.  The age of the truck driver will soon vanish or at least radically change to cargo minder.  Security will certainly make that a necessity.

Cargo piracy will soon become a hacking crime in which you override the onboard computer and then redirect to a location of choice.  If you can do that you can override all software secutity as well.

The easy solution will be an onboard cargo minder also tasked with unloading as well.

The delivery giant has announced a minority stake in autonomous trucking startup TuSimple
By Sean O'Kane@sokane1 Aug 15, 2019, 9:00am EDT

UPS has had autonomous trucking startup TuSimple hauling cargo for it between Phoenix and Tucson, Arizona, since May as part of a newly publicized partnership between the two companies. The delivery giant made the announcement today alongside the news that its venture arm is taking a minority stake in TuSimple. Terms of the deal were not disclosed.

TuSimple had previously run a partnership with the United States Postal Service in May, where the startup’s trucks carried mail on the 1,000-mile stretch between the USPS’s Phoenix, Arizona, and Dallas, Texas, distribution centers. That pilot has since ended, though the two sides are discussing “next steps,” according to a TuSimple spokesperson.


TUSIMPLE IS BACKED BY NVIDIA AND CHINESE TECH COMPANY SINA

Founded in 2015, TuSimple uses Navistar trucks outfitted with the startup’s own self-driving tech, which sees the world largely through nine cameras. While each truck is outfitted with a pair of LIDAR sensors as well, the startup is focused on developing a vision-based autonomous system — similar to what Tesla uses in its cars. The startup is already backed by Nvidia and Chinese technology company Sina, and it has a headquarters in San Diego, California, and another in Beijing.

TuSimple says it has been helping UPS “better understand the requirements for Level 4 Autonomous trucking in its network” — a reference to the Society of Automotive Engineers’ scale for self-driving vehicles, where Level 4 refers to full autonomy that’s locked to a designated geographic location. The trucks in use still have a safety driver and an engineer on board who monitor the system, like many of the other self-driving pilot programs currently running in the United States.

There are a number of startups and established companies working on autonomous trucking, from Kodiak and Einride to Waymo and even Daimler. (Uber shuttered its program last summer after one of its self-driving SUV test vehicles killed a pedestrian.) TuSimple is one of the few hauling actual commercial cargo, albeit in a limited capacity on just a few routes.

The partnership with (and stake in) TuSimple is just the latest sign of UPS’s ambition to future-proof its business, especially as Amazon builds out its own delivery infrastructure. UPS is working on a drone delivery service, and it has electric trucks in the works, all while matching key Amazon features. Rival FedEx recently announced that it didn’t renew its contract with Amazon, though UPS is still working with the tech conglomerate for now.
Posted by arclein at 12:00 AM