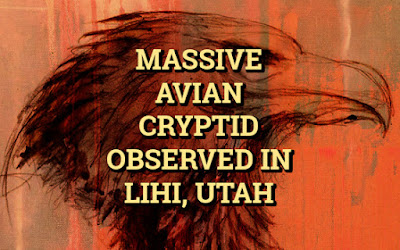 This is an extraordinary expert eye witness report that also produces a rigorous comparable.  The Sandhill crane is well known and similar in size to an eagle and our Thunderbird came in and snatched it directly out of the air.  The description suggests a Stellar sea Eagle as well.
It is abundantly clear that we simply do not see these birds, or if seen, they are far away at an indeterminate distance naturally confounding sizing observation.   We easily have plenty of sightings but few secure sizings.  At a distance it is way too easy to assume it is a golden eagle.

My own sighting in Mid West Ontario conforms well to the light grey juvenile Golden Eagle simply because the wing span was much larger than expected.  I only had that because it was ten feet off the deck over the center of a field i tramped often.  At any sort of elevation over the tree tops I would simply have not known.


I recently received a telephone call from an eyewitness 'JR' who claims she observed a huge winged creature in Lihi, Utah.


This incident occurred in the summer of 2017, on a very hot clear day at approximately midday. JR states that she had stopped for a traffic light when she noticed several Sandhill Cranes flying across the sky in front of her. She says that she was about 150-200 feet away. Apparently this is a nesting area for Sandhill Cranes.


As she watched, she saw a large dark wing creature descending towards the cranes. As it got closer, she was astonished by the size. It was definitely avian in form, with feathered wings that she estimates spanned 20 feet are more. JR has a Biology degree and is well-versed in the local avian wildlife.

The monstrous bird literally snatched one of the Sandhill Cranes, rose up and ascended on a thermal. It quickly headed off and away from the area. JR said that she noticed a band of white color on the front edge of the wings. She likened the shape to that of a Golden Eagle, but that the body was smaller in comparison to the huge wings. She also said the massive bird was 'at least' 4-times the size of the Sandhill Cranes!
JR said that she noticed only one other car at the intersection and doubts that they witnessed the event. She contacted her professor and asked for his opinion. He was flummoxed and told JR that she must have misidentified the bird. She is positive at what she saw. JR has made many attempts to identify the cryptid bird, but has been frustrated. She found me on Google and called to retell her observation. Lon
Posted by arclein at 12:00 AM