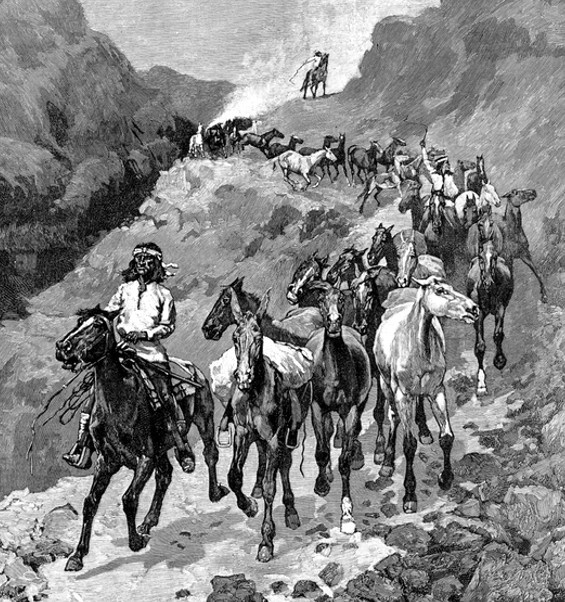 This was a sustained conflict that continued from contact through the early twentieth century.  The country itself could not sustain an increasing population with either the Apache tech kit or the colonizing Tech kit.  For that reason it was a war of displacement that  left little room for compromise.

For that reason the conflict was continuous, but also low level over huge tracts of geography.

No one is so tied to their ancestral lands today that they must fight..

The Mexicans v. the Apache. There is little to compare with the level of distrust and mutual butchery, which took place between the Spanish colonists to the North American continent, and the migratory bands of native Americans, known as Apache.

First contact between the Crown of Castile and the roving bands of Apache they called Querechos, took place in the Texas panhandle, in 1541. The wars began in the 1600s with the arrival of Spanish colonists in present-day New Mexico and were especially intense from 1831 into the 1850s. Mexican operations often coincided with the Apache Wars of the United States, and Mexico continued to operate against hostile Apache bands as late as 1915.

Horses had diffused northward from the Spanish settlements from which they were initially traded, stolen, or driven. Thereafter, many tribes turned to secondary horse-trading.

The Pueblo revolt of 1680 against the Spanish estancias, rancheros, and missions was significant in that it threw almost all the horses in New Mexico (Santa Fe de Nuevo México) onto the open Indian market. The Pueblos joining the revolt probably had 2,000 or more adult men capable of using native weapons such as the bow and arrow. It is likely that some Apache and Navajo participated in the revolt. The Revolt killed 400 Spanish and drove the remaining 2,000 settlers out of the province. The Spanish population, including mixed-blood mestizos, and Indian servants and retainers, was scattered thinly throughout the region. Every Catholic priest and friar in the region who did not escape was tortured and killed in the most gruesome of manners.

The Spanish response to the “Apache problem” in the 1770s was to reorganize its frontier defenses, withdraw from some areas, establish a "cordon of presidios" (forts) along the northern frontier, and undertake punitive missions against the Apache homeland. The punitive missions extracted a heavy toll of lives but were ineffective in halting Apache raids. The intensity of the conflict was at its peak from 1771 to 1776 when "1,674 Spaniards were killed, 154 were captured, over one hundred ranches were abandoned, and over sixty-eight thousand animals were stolen." In 1786, the Comanche joined the Spanish in their military operations against the Apache. Relative peace between the Apache and the Spaniards and Mexicans would endure until 1831.

The key element leading to renewed war in 1831 was that the Mexican government cut off food rations to Apaches settled near presidios, and 2,000 Apache quickly departed to resume their hunting-gathering lifestyle. Mexico was ill-prepared for the war against the Apache that it initiated. The Apache tribes most involved in the war, the Chiricahua and the Mescalero numbered only 2,500 to 3,000 people. Neither tribe had a central authority but consisted of a number of independent bands, numbering 100 to 500. Over 100 Mexican settlements were destroyed in that time. Mexico's problems with the Apache was exacerbated by the rising hostility of the Comanche, Kiowa and Kiowa-Apache, who in the 1840s and 1850s launched large raids involving hundreds of men into northeastern Mexico from the Texas plains. 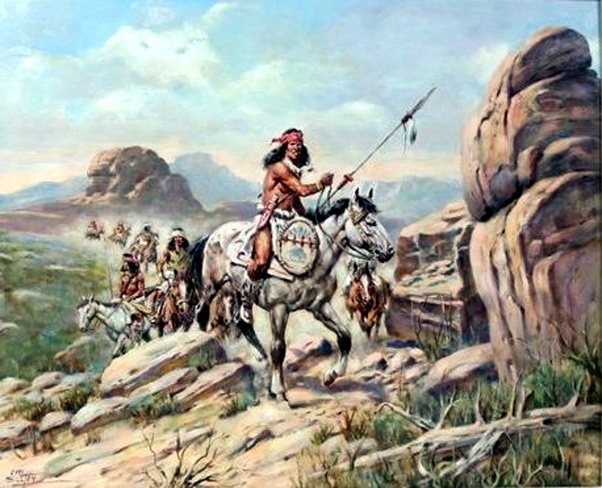 From 1832 to 1849, there were 1,707 recorded encounters, 1000 of which resulted in hostilities between Apache and Mexicans. A total of 1,394 Mexicans were killed, including 774 killed by Apache and 620 killed by Comanche or other unidentified tribes. A total of 559 Indians were reported killed, including 373 Apache and 186 Comanche and unidentified Indians. A Mexican official estimated that 5,000 Sonorans had lost their lives to the Apaches in the 1830s. The town of Arizpe saw its population reduced from 7,000 to 1,500 in a few years and it was necessary to move the capital of the state from there because of Apache attacks. Tucson was attacked several times and 200 people were killed by infiltrating Apache inside the walls of the presidio between 1832 and 1849. Casualty figures for both sides included many women and children. Additional incidents and casualties undoubtedly were unrecorded.

When the United States claimed the frontier territories of Mexico, Mangas Coloradas signed a peace treaty, respecting the Americans as the conquerors of the Mexican land. The U.S. victory in the Mexican–American War and the annexation of much of northern Mexico in 1848 did not initially impact the ongoing war between Mexico and the Apache as raids into Mexico and in the new territories of the US continued.

In 1861, Cochise and his party killed the members of a passing Mexican wagon train. The Apache killed and ritually mutilated nine Mexicans, and took three whites captive, but killed them later. They were unsuccessful in attempting an ambush of a Butterfield Overland stagecoach. A US Army officer, Lt. George Bascom hanged the Apache hostages in his custody. Cochise quickly fled to Mexico, which was outside American jurisdiction. On the way he tortured and killed the American prisoners and left their remains to be discovered. Cochise's subsequent war of vengeance took the form of numerous raids and murders across the border. Mangas Coloradas and Cochise, his son-in-law, struck an alliance, agreeing to drive all Americans and Mexicans out of Apache territory.

Over time, however, the US took on the bulk of the responsibility for pacifying the Apache, most of whom resided within its borders. In 1879, the veteran Chiricahua war chief, Victorio and his followers were facing forcible removal from their homeland. Victorio, 80 warriors, and their women and children fled. Several thousand American and Mexican soldiers and Indian scouts pursued him, as he fled from one stronghold to another. Victorio and many of his followers met their end on October 14, 1880 when they were surrounded and killed by Mexican soldiers at the Tres Casillos.

The last hostile band of Apache, led by Geronimo, surrendered in 1886, although individual Apaches continued to raid in the US and Mexico for many years. Much has been written of the conflicts between Natives and American settlers. According to National Geographic, however, Geronimo and his band of 16 warriors slaughtered 500 to 600 Mexicans in their last five months alone.

The last Apache raid into the United States occurred as late as 1924 when a band of natives, who were later caught and arrested, stole some horses from Arizona settlers. This is considered to be the end of the American Apache Wars. But the Mexican Apache Wars continued for another nine years, until the final holdouts were defeated in 1933.
Posted by arclein at 12:00 AM