Why do so many people think that the Allied World War II strategic bombing campaign was a failure? 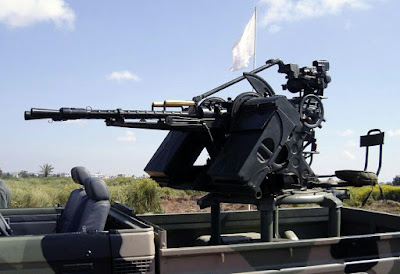 Turns out that it was not at all.  It deeply suppressed the manufacture of  critical field guns in particular.  At the same time maximum resources were plowed into anti aircraft guns whose efficiency was not justifying the expense or manpower.  The need called for a fire base that forced the incoming bombers to channel but after that, it was mostly a huge waste of effort and ammunition.

Saying more bombers would get through is not supported by what happened. Most got through and then bombed the same targets as ground Intel would be difficult with terrible accuracy anyway.  The literally tried far too hard.

That was a German Strategic blunder that weakened the field armies directly...

Why do so many people think that the Allied World War II strategic bombing campaign was a failure?

Albert Speer, in his postwar memoirs, wrote about how he mobilised the German economy - in 1942–43 still plodding along in lazy peacetime mode - for full warfare, massively increasing arms production and negating the effects of Allied bombing (which he dismissed as not very serious anyway). Despite the ineffectual Allied bombing, German industry massively increased production in 1943–44, turning out a veritable torrent of lethal machinery that only failed to win the war due to Hitler’s bumbling incompetence.

This gets accepted as truth (in the same way that other surviving Nazi generals’ The Scooby-Doo History Of The Second World War recollections get believed - they had the best tanks, the best planes, the best troops, the shiniest jackboots, they never lost a battle, and they would have gotten away with it if not for that damned meddling Fuhrer!) without checking the actual details.

In fact, from 1943 the strategic bombing campaign flatlined German armaments production: it had been increasing rapidly, more than doubling through 1942 and early 1943, but the onset of heavy Allied bombing from the summer of 1943 caused that increase to stop cold. 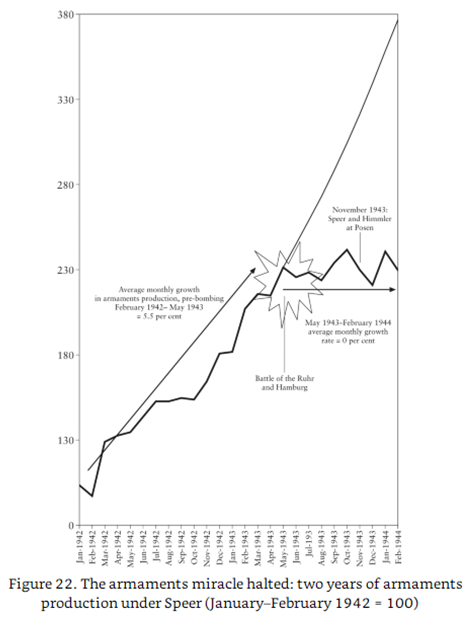 (Source: Tooze, Adam. The Wages of Destruction: The Making and Breaking of the Nazi Economy Penguin Books Ltd. )


Speer brought in measures to try to manage the problem, and - being a brilliant self-publicist - used those to show off his brilliance at solving the unsolvable. The reality, though, was that innovation and modification was all but stopped, to speed up production: so while the Luftwaffe received an increasing number of aircraft, they were mostly Me109Gs, which had been competent frontline aircraft in 1942 (facing Spitfire Vs and P-40s) but were lethally outclassed by P-51 Mustangs, Spitfire XIVs, P-47 Thunderbolts and Tempests. The simple expedient of cutting multi-engine types meant more aircraft could be produced for the same number of engines built: especially if no parts were set aside as spares, boosting Speer’s headline figures and leaving the maintenance problems for frontline units to solve.

A similar problem afflicted ammunition, which was the under-appreciated heart of war production and consumed the largest share of resources. While the tonnage of ammunition produced remained stable or rose, despite setbacks (though again, more slowly than planned or hoped) over half of it was expended skywards at Allied bombers - the Germans expended 15,000 shells per bomber destroyed. (Tooze, A. Arming the Reich: Quantifying Armaments Production in the Third Reich 1933-1945, Cambridge University 2006)

So, the strategic bombing campaign very definitely reduced German armaments production: it was meant and planned to have doubled between June 1943 and June 1944, instead it remained static.

Worse, it also diverted what was produced: at the point where the Germans were being pushed back across the steppes by Soviet tank armies, production of anti-tank guns and ammunition was falling because the factories were turning out tens of thousands of anti-aircraft guns instead.

But, this sort of detail is less impressive than claiming that production didn’t fall and that large numbers of weapons (albeit often of obsolescent type) were being turned out, therefore the bombing campaign “failed”.
Posted by arclein at 12:00 AM