The Amazing Labyrinth and the Hawara Pyramid with Dr Boulter 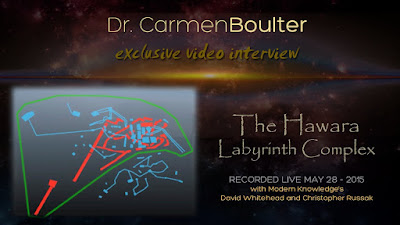 There were three disasters:
I      Pleistocene Nonconformity appoximately   12,950 BP.  Ended Antediluvian World then based on the continental shelf and throughout the tropics and 35,000 years of modern human development.  A massive comet targeted the pole area of the northern Ice Cap in order to end the Northern Ice Age.

II     Lake Missoula Collapse      approximately    6,000 BP  This is the least accurate so far in pinning down the date.  It generated a rapid rise in sea level that ceert6ainly pushed coastal populations back slowly over days and weeks.  Likely inundated the Dogger Bank.

III     Atlantean Subsidence in 1159 BC  of the The North Atlantic ridge and the Cuban Ridge as well.  Massive tsunamis produced that wiped out the Atlantean global sea borne civilization.

Please observe that other researchers are discovering some of this as well. It is quite plausible that the lower structure is the famous Hall of Records or not and that the upper structure was Atlantean efforts to access those records. At least our myths are now gaining a proper scale..
The Amazing Labyrinth and the Hawara Pyramid

Ground pentrating radar unearthed this two tier complex associated with the Hawara Pyramid south of Giza and close by Lake Oarum in Egypt.
This may well be the ancient hall of records. It certainly demands developing access to property investigate the whole complex.   A proper two compartment shaft should be put in place with pumping capacity to drain water from the whole formation.  Access tunnels can then easily open up the tunnels.

The separate red structure looks a lot like an earlier effort to do exactly this.


Dr. Carmen Boulter joins Modern Knowledge’s David Whitehead and Egyptians so far have not provided a license to excavate. Dr. Carmen Boulter revealed an astounding new discovery in Egypt found using a state-of-the-art satellite-based deep penetrating radar scans. The scan reveals vast underground construction greater than that above ground. .The Hawara Pyramid was erected by the Twelfth Dynasty pharaoh and is called Amenemhat, the third, ruler of Kemet, from around 1860 to 1814, Before Common era, and who also built the Black Pyramid at Dahshur. Much of the complex appears much older.


A friend of mine who was the top teacher in New Jersey was granted a trip to Egypt and shown ancient tunnels built in solid rock that were very smooth like the Gypsum Board walls in your home that extended for miles. They were guarded by men with sub –machine guns standing at attention.


Whether the complex was built by advanced ancient humans or aliens is unknown but it was technologically advanced and took millions of man hours to dig often through solid rock. It lends one to ask why? It would appear they knew of an upcoming disaster such as a Comet heading toward Earth or the apparent disaster when stars in Cancer were crashing into Leo. The Sun may have setting off warnings of strong sun flashes CMEs, or predictions of the flood. Some Earth changing occurrence may have caused the Earth to tilt 13 degrees. Mars shows evidence of a similar disaster. Somehow they seemed to know a disaster was eminent and underground facilities might protect them from an apparent on coming disaster. Aliens may have known Earth was going to be hit and made preparations. Interestingly Norway is now making similar preparations. These may also been storage areas for food knowing a disaster was going to happen.


Allegedly there were three disasters. The aliens might adjust to the Earth’s atmosphere perhaps by building underground. Something happened 12,300 years ago and vaporized much of the ice on Earth. Comet from its heat entering the atmosphere and exploding vaporized the ice over North America and floods that followed were likely.


The Egyptian labyrinth was so named by the Greeks after the legendary complex of meandering halls designed by Daedalus for King Minos of Crete (wherein the Minotaur dwelt). The Greek historian Herodotus wrote of the Labyrinth in the fifth century B.C. (History, 2.148-49):


Herodotus stated, “Furthermore, they resolved to leave a memorial of themselves in common, and in pursuance of this resolve they made a labyrinth, a little above Lake Moeris. I saw it myself and it is indeed a wonder past words; for if one were to collect together all of the buildings of the Greeks and their most striking works of architecture, they would all clearly be shown to have cost less labor and money than this labyrinth. Yet the temple at Ephesus and that in Samos are surely remarkable. The pyramids, too, were greater than words can tell, and each of them is the equivalent of many of the great works of the Greeks; but the labyrinth surpasses the pyramids also. It has 12 roofed courts, with doors facing one another, 6 to the north and 6 to the south and in a continuous line.


There are double sets of chambers in it, some underground and some above, and their number is 3,000; there are 1,500 of each. We ourselves saw the above ground chambers, for we went through them so we can talk of them, but the underground chambers we can speak of only from hearsay. For the officials of the Egyptians entirely refused to show us these, saying that there were, in them, the coffins of the kings who had built the labyrinth at the beginning and also those of the holy crocodiles. So we speak from hearsay of these underground places; but what we saw above ground was certainly greater than all human works. The passages through the rooms and the winding goings-in and out through the courts, in their extreme complication, caused us countless marvels as we went through, from the court into the rooms, and from the rooms into the pillared corridors, and then from these corridors into other rooms again, and from the rooms into other courts afterwards. The roof of the whole is stone, as the walls are, and the walls are full of engraved figures, and each court is set round with pillars of white stone, very exactly fitted. At the corner where the labyrinth ends there is, nearby, a pyramid 240 feet high and engraved with great animals. The road to this is made underground.


An even greater marvel is what is called Lake Moeris, beside which the labyrinth was built. The circuit of this lake is a distance of about 420 miles, which is equal to the whole seaboard of Egypt. The length of the lake is north and south, and its depth at the deepest is 50 fathoms [300 feet]. That it is handmade and dug, it itself is the best evidence. For in about the middle of the lake stand 2 pyramids that top the water, each one by 50 fathoms [300 feet], and each built as much again underwater; and on top of each there is a huge stone figure of a man sitting on a throne. So these pyramids are 100 fathoms [600 feet] high, and these 100 fathoms are the equivalent of a 600-foot furlong, the fathom measuring 6 feet, or four cubits (the cubit being six spans). The water in the lake is not fed with natural springs, for the country here is terribly waterless, but it enters the lake from the Nile by a channel with dams at each end.


The notorious Erich von Däniken believes that the Labyrinth is yet to be discovered and is “waiting for a modern-day Heinrich Schliemann.” On this, for once, he may be right. He further posits that it is “located seven days’ journey up the Nile, on the Libyan side, a little above the city of Memphis, at the entrance of the canal into Lake Moeris. The lake extended in a north-south direction and was situated in the Arsinoe region. Also, the canal feeding the lake was connected to the Nile and was regulated by locks and dams.” (The Eyes of the Sphinx, 1996, page 111) The lake and canal have long been dry, von Däniken is certain, though traces of these should be evident from