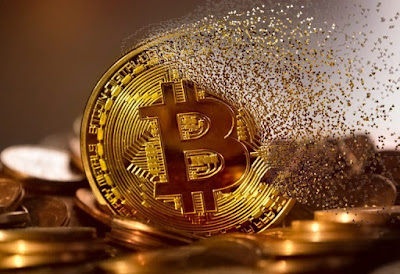 We are heading toward a system of fixed exchange rates and disciplined central banks and finance ministers.  In the past gold was used to adjust the system.  Yet it was inconvenient and slow moving as well.

Now we have bitcoin to solve this problem.  With or without intent, it is likely to be come a necessity.  After all i can accept RMBs and then use that to buy bitcoin and my money becomes stateless and no transportation is necessary.

Yet all this will still take time to work its way through.  Even years but the direction itself is clear

The global economy faces its biggest crisis in 11 years.

In theory, this should be bitcoin’s moment to shine, a chance to prove itself as an uncorrelated asset immune from political risks. Eventually, that result may bear out. But a rocky road lies ahead – for bitcoiners and nocoiners alike.

Before we do the bitcoin up or down game, let’s dive into why the current situation in global finance is so disturbing.

It all begun last Monday, when Beijing let the renminbi fall below RMB7.0 to the dollar.

Almost immediately, the U.S. Treasury Department said it would take the rare step of labeling China a “currency manipulator,” a move that, in theory, would give the Trump Administration legal cover to impose punitive sanctions against Chinese. Markets freaked out at the specter of a currency war, a tit-for-tat feedback loop of exchange rate depreciations fueling a destructive downward spiral in trade and growth.

Now, that fear may never play out.

On Thursday, the People’s Bank of China helped assuage investors’ fears. In buying more renminbi to stabilize its value, it signaled that it isn’t, for now, intending to aggressively use its currency as a trade weapon.

Also, the U.S. pronouncement made no sense. By the Treasury Department’s own definition, manipulation entails persistent, one-sided intervention in markets to weaken the domestic currency. But the renminbi’s fall came because the PBOC briefly had pared back its prior interventions supporting it.

If anything, China has persistently done the opposite of market manipulation over the past five years, propping up its currency against a market that wanted to take it lower, all in order to refocus the country’s economic growth model away from a dependence on foreign exports.

On that basis, there’s no way the International Monetary Fund or World Trade Organization would support the Trump Administration’s case that China is a currency manipulator, leaving the U.S. vulnerable to very harmful international sanctions if it were to unilaterally hit China with retribution on that basis.

The problem is the global political economic environment doesn’t build confidence that politicians will act rationally. Facts and multilateral institutions’ views carry less weight in an era when major Western nations are retreating from the neo-liberal norms of the nineties and aughts. So, don’t be surprised if we see even more extreme market turmoil over currency war risk in the near future.

Any escalation would play out in a global spiral. A weaker renminbi means all other countries that trade with China are also disadvantaged. So, they’ll also feel compelled to weaken their currencies, which means their trading partners will in turn feel pressured to do so.

Any countries with nominally free-floating currencies won’t do this via intervention or outright devaluation; instead they’ll use interest rate cuts, which soften demand for their currencies and so have a similar effect. Central banks don’t even need to justify such cuts in currency terms; they’ll just note that a global trade war is undermining the domestic economic outlook.

Already, New Zealand, India and Thailand have announced interest rate cuts in response to the renminbi’s decline. Meanwhile, bond markets are expressing investors’ worst fears: the yield on the 10-year U.S. Treasury note is now almost below that of the three-month T-bill, ominously close to an “inverted yield curve,” which has traditionally signaled impending recession and much weaker monetary policy from the Federal Reserve.

This low interest environment is eating into banks costs. This is why Swiss bank UBS is now charging large depositors a fee to hold money at the bank – a negative interest rates play that angers savers.

The scariest image here is not one of rebellion by angry rich savers, or even of a repeat of the heavy market turmoil of the 1997-98 Asian financial crisis or the even more extreme losses of 2008-2009.

It’s that a currency war in which the U.S. is a deliberate belligerent would look more like the 1930s.

That’s when the end of the gold standard and the U.S. Smoot-Hawley tariff law combined to spur a global cycle of devaluations that extended and widened the Great Depression. The ensuing international tensions fanned the flames of the Second World War.

Of course, this is not the 1930s. We have a far more globalized economy, and we have the Internet. This greater interconnectivity, economists and political scientists often argue, will compel people, businesses and their politicians to resist conflict, economic or otherwise.

But we also now know that interconnectivity, at least in its current “Web 2.0” format, has been highly disruptive to a political establishment that used to champion pro-globalization, pro-free trade policies.

Google’s and Facebook’s centralized, data-mining algorithms have created echo chambers of dopamine-addicted group-thinkers, which, along with disinformation bots and “fake news,” have weakened the mainstream media outlets around which that establishment once revolved.

Whether you’re cheering for its demise or not, the liberal vision of the nation-state is under threat, and that’s sowing chaos. On one side, the Internet has enabled new, transnational groups with loyalties that transcend their countries’ interests. On the other, this dislocation has fostered a backlash from defenders of the pre-liberal order of hardline state power.

This same past week’s images of China’s violent crackdown in Hong Kong, where protesters desperately attempted to neutralize Beijing’s frightening digital surveillance, is a prime example.

Another is Trump’s militaristic rhetoric.

But here’s what also wasn’t around 80 years ago: cryptocurrency. People who worried in the 1930s about currency debasements, ethnic conflict or war destroying their wellbeing often turned to gold as a safe haven. Gold represented an ancient, widely recognized store of value whose properties, including its supply, were outside of the influence of turmoil-stoking governments.

But now a citizen seeking a hedge against such threats has a digital alternative, one that’s far more appropriate for the Internet age, a vital bulwark against the centralized control of both banks and large Internet companies and against wayward governments.

That alternative is bitcoin, whose digital properties are similar to those of “hard currencies” like gold: it’s hard to mine, provably scarce, fungible and transferable. Even better, as bitcoin bulls like to point out, the upcoming halving in bitcoin’s supply will put its stock-to-flow ratio above that of gold. (I’d say that should be priced in, however; I don’t see it as a reason, in and of itself, to buy now.)

Why bitcoin and not some more recent, technically superior altcoin? Because, as with gold’s preeminence over silver as a safe haven, bitcoin has by far the biggest community of believers in its capacity to protect a holder’s wealth from political incursions. It’s this shared belief that gives bitcoin its power, a point poorly understood by those who erroneously argue that software forks undermine its digital scarcity. (Exhibit A: Bitcoin Cash’s market cap compared with bitcoin’s.)

Herein lies the “buy bitcoin” argument for this current moment: that, regardless of your own beliefs, a sufficiently large number of other people now believe bitcoin to be the best way to hedge against political-economic turmoil in the global financial system.

More important is the fact that bitcoin has not sold off in recent months as other real-world assets have come under pressure – a result that possibly counteracts an argument I made a year ago  that global financial market jitters would first spark a selloff, as bitcoin would be lumped into widespread risk aversion, with a recovery only once it had established its credentials as hedge against politics. Perhaps the departure of many newbie speculators who bought in during the crypto mania of 2017 has left the market in the hands of a more die-hard core of true-believing HODLers.

Still, it would be foolish to assume the path from here is straight upwards. One major risk to that view is that of a profound, sweeping regulatory backlash, a jump into what Nic Carter of has labeled the phase of “full criminalization.”

The idea is that governments, seeing investment outflows accompanying the financial turmoil, will worry about bitcoin enabling capital flight and so seek to ban it or at least introduce restrictions on exchanges that make the on- and off-ramps very difficult to use.

For sure, a global regulatory backlash can’t kill the censorship-resistant “Honeybadger of money,” which is these kinds of situations do make a strong case for owning it in the long run.
But for now the best prediction is that market volatility will continue.
Posted by arclein at 12:00 AM