Tolkien, Christianity, and the State 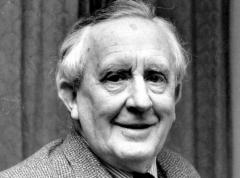 Herein we find a critical teaching, central to The Lord of the Rings and of Christianity itself. It is simply that power begats evil.  Thus real power must always be opposed or internally countered.
It is my contention that the lure of power can be readily managed and defrayed by application of the Rule of twelve as this naturally throws up the best leaders while also containing them.  We accomplish something similar or at least to intend to do so with our various forms of electoral politics.  The weakness there is talent wastage in particular which the rule of twelve can bypass...

What fails miserably is all forms of hierarchical governance and this has been our bane forever.
I find it curious that Jesus did attempt to introduce the rule of Twelve. It was never picked up on.

Tolkien, Christianity, and the State


The conservative intellectual movement is having an existential crisis, of sorts. It’s one that has long been simmering but only recently thrust into the light after First Things published New York Post opinion editor Sohrab Ahmari’s attack on the failings of what he termed “French-ism.” According to Ahmari, French-ism means defending a pluralistic liberal society in which we treat our political foes with dignity and respect, despite disagreement. Conversely, Ahmari argues that Christians must abandon liberalism and use the state to crush Christianity’s enemies and “enforce our order and our orthodoxy” upon them.

A glance around at the current state of affairs makes it easy for Christian conservatives and libertarians to become disheartened and, consequently, at least sympathize with the illiberal intentions of people like Ahmari. To those frustrated with the encroaching leftist darkness, it may seem that Ahmari’s way is the only option left to them. Fortunately, as author and philologist J.R.R. Tolkien might have told us, it’s not.

The comparison between Ahmari and Tolkien is worth examining. Indeed, Tolkien wasn’t merely a vastly imaginative and adept fantasy writer. He was also a Christian thinker steeped in robust Catholic thinking — something Ahmari himself claims to be. But their ideas on what the common good looks like are wildly disparate. Unlike Ahmari, who believes the only possible manifestation of the common good is his own, Tolkien colored his work with a clear message of pluralism. The renowned trilogy The Lord of the Rings (LOTR), and even some of Tolkien’s lesser-known work such as Farmer Giles of Ham, emphasizes the need for diversity and the freedom for different groups and people to live in a way that best suits them. In real life, as in Tolkien’s fictional realms, this decentralization doesn’t lead to a perfect society, by any means. But the alternative of centralized direction by the state — as proposed by Ahmari — leads to even worse consequences, as the amount of power flawed humans have at their disposal increases.

As recently as fall 2017, Ahmari was defending liberalism. Now, sadly, he craves Tolkien’s One Ring of Power, believing it necessary to order things in accordance with his conception of the common good. In The Lord of the Rings, Tolkien confronts this sort of militant belief head-on. Indeed, the wizard Saruman the White began as an agent of the good, but, gradually, he came to crave power and control. In the process, he fell in with the ranks of evil. While later attempting to sway Gandalf to join him in his alliance with the forces of darkness, Saruman tries justifying his naked power grab. “Our time is at hand: the world of Men, which we must rule,” he says. “But we must have power, power to order all things as we will, for that good which only the wise can see.” Sound familiar?

To the Sarumans of our world, people are incapable of being left to their own devices. Clearly, Ahmari now believes that a powerful hand of the state is needed to shepherd people into making correct decisions — pesky leftists who disagree simply must be crushed. A troubling and ever-increasing number of conservatives agree. Now we see hearty, open endorsements of banning payday lending, capping interest rates, and the reimposition of blue laws. All in the name of the common good.

Strangely enough, the Ahmari camp seems to think that support for freedom is condescending to the blue-collar American. In response to a recent article of mine addressing why reimposing blue laws that regulate commerce on Sundays won’t boost church attendance, Ahmari took to Twitter to claim that I look down on people who work Sundays as being “peasants.” But it’s Ahmari who sees everyday people as ignorant plebeians incapable of running their own lives. Why else propose using the power of the state to impose his vision and values upon them?

We have no evidence that if he and his ilk were somehow handed power, they’d grant the dignity of autonomy to the same people for whom they clearly have no respect now. Indeed, it would likely look frighteningly similar to the way Saruman and his lackeys treated the hobbits of the Shire after they took it over and attempted to impose upon them their conception of “the good.”

It may be that Tolkien and Ahmari’s differing views on power stem from a fundamental disagreement about the nature of good and evil on this earth.

Tolkien, for his part,believed that evil can’t be vanquished entirely — not on this earth, at least. Indeed, in his eyes, the battle against evil was nothing but a long defeat: a losing rear-guard action in a world corrupted and defiled by sin. LOTR, after all, is set in a post-collapse world in which the great powers of good are but mere shadows of their former glory. Alas, even in victory, the bad is always encroaching. In fact, later in life, Tolkien began a sequel to The Lord of the Rings entitled The New Shadow, in which, 100 years after the fact, the forces of evil and corruption once again stir.

Tolkien’s mythology echoed the Christian belief that evil will eventually gain dominion over the earth until the penultimate battle in which it’s overthrown and a new earth is created — free from the marring power of sin and evil. It’s precisely why Tolkien thinks that using the Ring of Power won’t work — limitless power only leads to further evil here on earth.

Whether he means to or not, Ahmari exudes a belief that the strength of man alone can deliver some form of temporal victory for Christians. For him, good can be established in this fallen world — no compromise necessary. But his rant against French-ism comes across as a delusional power trip comparable, one might say, to Boromir’s fantasizing on the slopes of Amon Hen about leading hosts of men to crush Mordor once he has the Ring of Power. Unlike Boromir, however, Ahmari isn’t even a mighty prince of men. He’s an editor at a tabloid newspaper.

Gandalf or Saruman? Boromir or Faramir? Denethor or Theoden — who do we wish to be? Tolkien knew this was a choice that would continually face those seeking to do what’s right.

In urging Christians to use the Ring of Power against their enemies, Ahmari is heedless of the danger it poses to themselves and others. While Ahmari may argue that fighting for control of the state is a moral necessity for Christians, thinkers like Tolkien adeptly show that far from being a Christian duty, such actions actually have the opposite effect. Christians can try to wield the Ring of Power for good, but it will inevitably lead to evil.
Posted by arclein at 12:00 AM