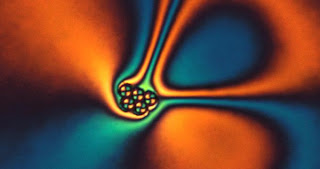 This is a measure of just how far we have come on manipulating single molecules and atoms. We can expect some amazing stuff out of all this. We will even have serious applications for all that work in topology and in fact give the field itself quite a boost.

It is all good and no longer even surprising.


By showing that tiny particles injected into a liquid crystal medium adhere to existing mathematical theorems, physicists at the University of Colorado Boulder have opened the door for the creation of a host of new materials with properties that do not exist in nature.

The findings show that researchers can create a "recipe book" to build new materials of sorts using topology, a major mathematical field that describes the properties that do not change when an object is stretched, bent or otherwise “continuously deformed.” Published online Dec. 23 in the journal Nature, the study also is the first to experimentally show that some of the most important topological theorems hold up in the real material world, said CU-Boulder physics department Assistant Professor Ivan Smalyukh, a study senior author.


The research could lead to upgrades in liquid crystal displays, like those used in laptops and television screens, to allow them to interact with light in new and different ways. One possibility is to create liquid crystal displays that are even more energy efficient, Smalyukh said, extending the battery life for the devices they’re attached to.


The research was funded in part by Smalyukh’s Presidential Early Career Award for Scientists and Engineers, which he received from President Barack Obama in 2010. And the research supports the goals laid out by the White House’s Materials Genome Initiative, Smalyukh said, which seeks to deploy “new advanced materials at least twice as fast as possible today, at a fraction of the cost.”


Smalyukh, postdoctoral researcher Bohdan Senyuk, and doctoral student Qingkun Liu set up the experiment by creating colloids — solutions in which tiny particles are dispersed, but not dissolved, throughout a host medium. Colloids are common in everyday life and include substances such as milk, jelly, paint, smoke, fog and shaving cream.


For this study, the physicists created a colloid by injecting tiny particles into a liquid crystal — a substance that behaves somewhat like a liquid and somewhat like a solid. The researchers injected differently shaped particles that represent fundamental building-block shapes in topology. That means each of the particles is distinct from the others and one cannot be turned into the other without cutting or gluing. Objects that look differently can still be considered the same in topology if one can be turned into the other by stretching or bending – types of “continuous deformations.”


In the field of topology, for example, an object shaped like a donut and an object shaped like a coffee cup are treated the same. That’s because a donut shape can be “continuously deformed” into a coffee cup by indenting one side of the donut. But a donut-shaped object cannot be turned into a sphere or a cylinder because the hole in the donut would have to be eliminated by “gluing” the sides of the donut back together or by “cutting” the side of the donut.


Once injected into a liquid crystal, the particles behaved as predicted by topology. “Our study shows that interaction between particles and molecular alignment in liquid crystals follows the predictions of topological theorems, making it possible to use these theorems in designing new composite materials with unique properties that cannot be encountered in nature or synthesized by chemists,” Smalyukh said. “These findings lay the groundwork for new applications in experimental studies of low-dimensional topology, with important potential ramifications for many branches of science and technology."