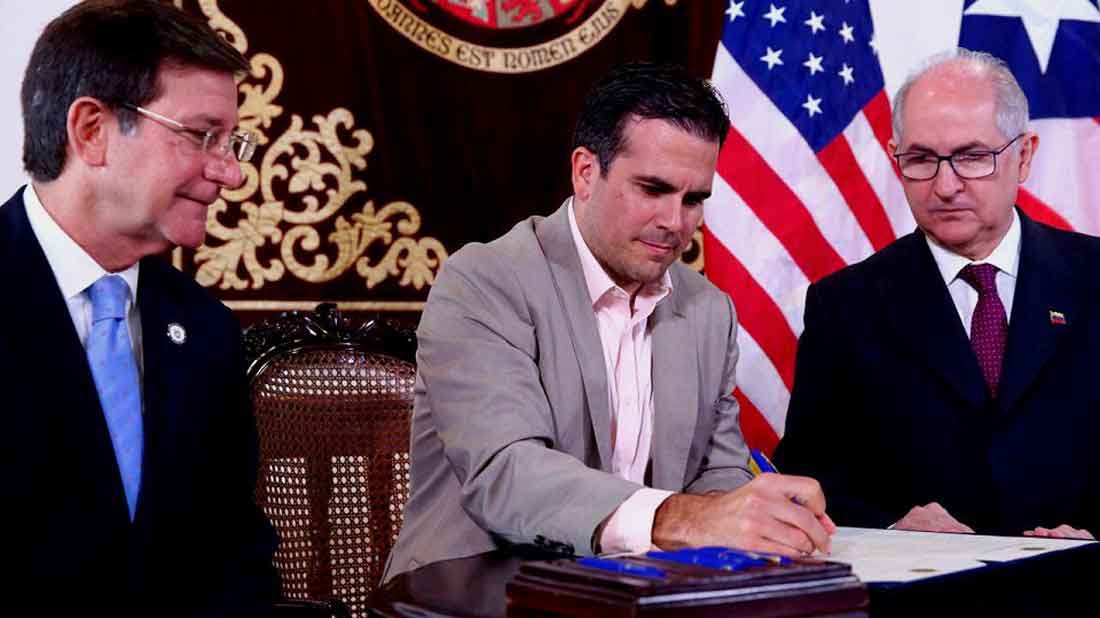 What we do know now is from one source whose reports are below.  I do not think that this is a false alarm particularly if Chinese and/or Russian and/or Cuban ground forces are in play as well.  We have two large fleets at staging areas observing signal discipline and needing to manually scrub their GPS history.  We also have at least one empty naval port in Florida.
Having a military presence here is a bold Russian/ Chinese move  that is completely unsustainable over even the short term.  Yet it would certainly trigger an aggressive USA response.  Yet we may never actually be told about this.  Moving now topples Venezuela now and sends spurious intervention packing in any event.
Again we do not know anyone's intentions.  I suspect a Marine expeditionary force is in position as a deterrent at least while the heavy lifting takes place on the Colombian border where conventional forces are now on standby.  The strategy could well be to allow the effective Colombian army to over run the likely demoralized Venezuelan army.  At that point Marines may land to support the restoration of governance and the economy.

Fears of a nasty miscalculation remain however.
.


Hypothetical post-Maduro planning has been discussed “at many levels”, Governor Rossello claimed. His comments follow Trump’s endorsement of a military coup d'état in Venezuela.

Merida, October 3, 2018 (venezuelanalysis.com) –Puerto Rico’s governor joined regional voices backing the overthrow of the Venezuelan government Tuesday, following the visit of the fugitive ex-Mayor of Caracas, Antonio Ledezma, to the US protectorate.

Governor Ricardo Rossello called for the “elimination” of President Maduro, who was democratically re-elected in May for a second term with 67.7 percent of the vote in elections qualified as transparent, free, and fair.

“What should happen is that the dictatorship should be eliminated. We are defining what will happen afterwards, and what steps are to be taken,” stated Rossello in a press conference following the meeting with Ledezma.

He went on to claim that such “steps” have “already been discussed at many levels” and that they point towards “concrete results.”

As part of the announcements, Rossello invited Venezuela’s opposition leaders to a summit this October 20 and 21, to be held in San Juan, Puerto Rico, which will look to establish a ‘Commission for the Reconstruction of Venezuela’, with Puerto Rico acting as “the headquarters” for “logistical support” to a “transition” government in Venezuela.

“We want to be ready for the day after, so that Venezuela counts on a government and an ordered and adequate transition. So that you know that you have friends across the world, Puerto Rico is going to be this connector for the coordination of all of this help,” Rossello added.

In front of press, the Governor signed an agreement which includes hypothetical land, maritime, and air supply corridors to Venezuela.

Rossello’s comments follow controversial declarations by US President Donald Trump, as well as Florida Senator Marco Rubio, Organisation of American States (OAS) Secretary-General Luis Almagro, and others, which have backed a coup d’état, military intervention, or other forced rupture of democracy in Venezuela.

The New York Times recently reported that Washington had held meetings with “rebel” Venezuelan military commanders to discuss the logistics of organising a coup d’état.

Puerto Rico continues to form part of the United States of America, and is the closest US-controlled territory to Venezuela, with only 1000 kilometers of sea separating the two. It was acquired by the US in the Paris Treaty ─ alongside Guam and the Philippines ─ which culminated the 1898 Spanish-US war. As such, the island is subject to US foreign and military policy, including housing numerous US military bases.

The recent agreement between the Puerto Rican government and Ledezma has already been communicated to Washington, as well as to the OAS, authorities informed.


For his part, Ledezma told press in San Juan that “a logistical operation will be launched from this Antillean Island.” He has previously gone on record calling for a foreign-led “intervention” into Venezuela.

From exile, the ex-Mayor and longtime anti-government leader heads the ‘I Am Venezuela’ (Soy Venezuela) movement, just one of the numerous fragmented anti-Chavista groups. His movement boycotted the recent presidential elections, and publicly opposed opposition groupings which decided to participate. Soy Venezuela, which Ledezma leads alongside outspoken government critic Maria Corina Machado, receives substantial criticism from other anti-government forces who claim that, operating from Madrid, Paris, or Washington, it is disconnected from the local reality.

Ledezma is currently fleeing charges of conspiracy and criminal association in Venezuela for his role in the 2014 violent street protests which looked to oust the government through force. He was arrested in 2015, and his sentence was later commuted to house arrest, before dramatically fleeing authorities in November 2017. Since, he has toured Europe, the US, and Latin America rallying support for his efforts.

Caracas is yet to react to the latest statements of the Puerto Rican authorities, but President Maduro has offered firm backing to the independence struggle of the Puerto Rican people in the past. Recently released political prisoner and independence leader Oscar Lopez Rivera has been hosted by Caracas, with Maduro calling on Puerto Ricans to break the shackles of colonialism. Maduro’s position has put him at heads with that of Governor Rossello, who favours full US statehood.