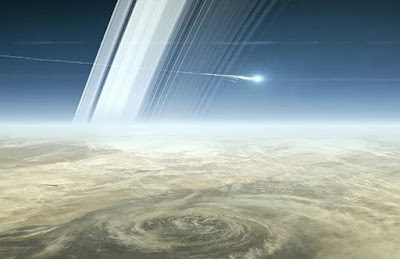 What we do not have is any confirmation of massive devices harvesting the rings or something like that.  Of course it either does not exist or it has been neatly edited out which appears to be SOP at NASA.

At this point we are not supposed to know and NASA knows better than to acknowledge the meme.

A vertical magnetic field may well be artificial and Saturn is the one planet that i would anticipate this.  It does not prove anything but it points at another oddity for Saturn.  Recall our speculation that Saturn is used to add inertial mass to world ships passing through our solar system who would match orbits with Saturn in order to add mass.  All this would nicely support a major change in trajectory and would typically be repeated at every star visited.

Also recall that a world ship would have the capacity to land a global population on a planet as well and may well be doing just that as part of an expanding sphere of life..

Cassini is dead, but its legacy lives on. Before the NASA spacecraft plunged into Saturn and burned up last September, it made 22 daring final orbits, swooping between the planet and its rings in a mission called the Grand Finale. Now, researchers are analysing the data from the that mission, and there are a few surprises.

The magnetic fields of planets in our solar system are all tilted to some extent – Neptune’s is off by a whopping 47 degrees. But Saturn’s magnetic field seems to be perfectly straight, and our current theories of how these fields are generated suggests that should be impossible.

“If you don’t have a tilt, you would expect the magnetic field to start dying away, but as we got in really close with the Grand Finale orbits, we saw that it is not,” says Michele Dougherty at Imperial College London.

That might mean that Saturn produces its magnetic field differently from the other planets in our solar system, maybe with many onion-like layers of flowing particles producing the field instead of a single zone.

Saturn has a lot going on between its rings

Even the seemingly empty space between Saturn’s surface and its rings is more exciting than we thought. “There’s this connection between the rings and the upper atmosphere of Saturn that we just didn’t think would be there,” says Dougherty. “That was a complete surprise.”

That connection is in the form of streaming electric currents that flow between the rings and the upper atmosphere. It’s not yet clear what’s causing them or why they’re there, says Dougherty, but she hopes that combining the data from different Cassini instruments will help us figure it out.

The currents aren’t all – there’s also a belt of radiation coming from trapped energetic particles between the rings and the planet. It’s similar to Earth’s Van Allen belts, which can be dangerous for astronauts and spacecraft that might pass through them, says William Kurth at the University of Iowa.

It’s not clear how those particles got there, though. “Since Saturn has this elaborate ring system, it’s difficult to get energetic particles from the outer areas across the rings,” Kurth says. Figuring out how the belt formed could help us understand similar zones of radiation around other planets.

Saturn’s rings rain the equivalent of 1800 cars per minute

Between Saturn’s innermost rings and the top of its atmosphere is a deluge of tiny particles falling down from the rings into the planet, called ring rain. Cassini found that, around Saturn’s equator, this rain deposits up to 45,000 kilograms of dust, ice, and gas every second.

That’s the equivalent of about 1800 cars falling into Saturn every minute – such a downpour may mean that the rings are disappearing faster than we thought.

While the rings are made of mostly water ice, the rain is much more diverse, with ammonia, nitrogen, methane, and even more complex organic particles. This may affect the chemistry of the top layers of Saturn, says Hunter Waite at Southwest Research Institute in Texas.

This downfall was not obvious before Cassini because it’s spread over a large area. “It’s not like rain, really – more like a really fine mist that you can’t even really see,” says Waite. “The particles are so small that I don’t think you’d feel them if you were floating between Saturn and its rings.”