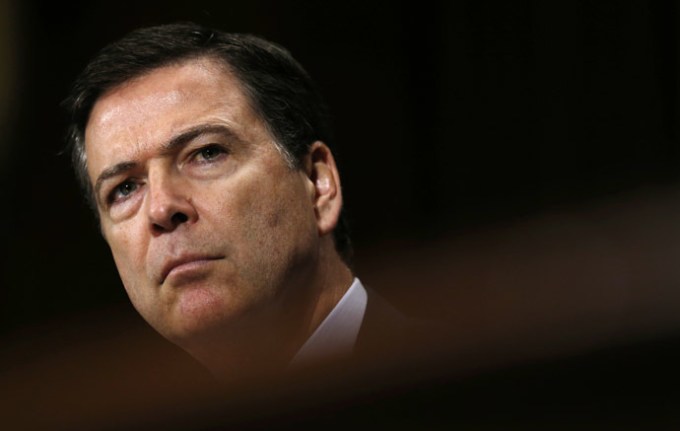 A lot of young college students end up briefly buying into communism and another group are actually born into it such as Obama. Normally common sense does take charge and the obvious contradictions of communism and its atrocious track record ends the romance.
I do not think the Comey ever was anything other than a naive student who remained fearless on the topic. A slight understanding of history would have cured that.  There is a real reason why Communism and its brother Nazism is hated by millions.
The true believer though is one John Brennan who surely grew up in a communist family easily found among extreme union families.  That the DEEP STATE was captured by the money of the NAZIs came as a complete surprise though.
..
That time former FBI Director James Comey admitted he was a Communist

(Natural News) If you ever wondered why POTUS Donald Trump and his brand of ‘America First’ patriotism is so viciously attacked and opposed by ‘official’ Washington, a glimpse beyond the headlines into the lives and former lives of the traitorous, treasonous cretins who make up much of the Deep State bureaucracy provides the answer.

In recent months several reports noted that former CIA Director John Brennan once voted for a Communist candidate for the U.S. presidency. As reported by none other than the ‘Communist News Network, a nickname many give CNN, Brennan was so concerned about the vote that he said he “froze” during his first polygraph test to enter the CIA because he was afraid of answering one of the most basic questions: ‘Have you ever worked with or supported a group dedicated to overthrowing the U.S. government?’


Communists, of course, are dedicated to that very thing.


“I froze,” Brennan told an audience in 2016. “This was back in 1980, and I thought back to a previous election where I voted, and I voted for the Communist Party candidate,” he said.


How a man who once voted for a Communist ever obtained a security clearance, let alone rose to become head of the CIA, is beyond comprehension, but apparently, he wasn’t the only high-ranking government official to achieve similar ranking status.

It turns out that fired FBI Director James Comey also owned up to supporting the Communist ideology, as noted in a 2003 New York Magazine article.

They voted for Communists when the Cold War was raging

At the time, Comey was the U.S. Attorney for the Southern District of New York, one of the most powerful district courts outside of the Supreme Court and the D.C. District Court, and he was preparing to become then-Attorney General John Ashcroft’s deputy AG after being nominated by President George W. Bush – because he was ostensibly a “Republican.”


But he wasn’t always one if he ever really was one. He told New York Magazine, “In college, I was left of center, and through a gradual process I found myself more comfortable with a lot of the ideas and approaches the Republicans were using.” Though he voted for Carter in 1980, in ’84, “I voted for Reagan—I’d moved from Communist to whatever I am now. I’m not even sure how to characterize myself politically. Maybe at some point, I’ll have to figure it out.”


Even the most vociferous critics of former President Jimmy Carter would never have labeled him a Communist. He was certainly liberal-leaning and a Democrat, having grown up in a wealthy peanut-farming family in Georgia and having served in the U.S. Navy as a submariner in the 1940s and 1950s (so not a today Left-wing lunatic Democrat). But he was no Communist.

What’s the big deal you ask?

Mind you, at the time these future leaders of the U.S. intelligence and law enforcement communities were supporting Communists and Communism was a period in American history when the Cold War was ‘raging,’ so to speak, and we were in direct great power competition for survival with a nuclear-armed, Communist-governed Soviet Union.

The USSR’s sole objective was to remake the globe in Moscow’s authoritarian, authentically Communist vision. At times this Cold War turned hot – on the Korean peninsula (where a state of war still officially exists), in Vietnam, and in Afghanistan (after the Soviets invaded). The Cold War almost turned really hot in 1962 during the Cuban Missile Crisis.

And here these men were supporting a form of government that sought to subvert our own.

Couple this with the fact that James O’Keefe’s Project Veritas undercover journalists are outing self-avowed Democratic Socialists currently working for our government and working to thwart POTUS Trump’s agenda, and you begin to understand why the opposition to our 45th president is so visceral and so manic.