Due Process and the Trump Presidency 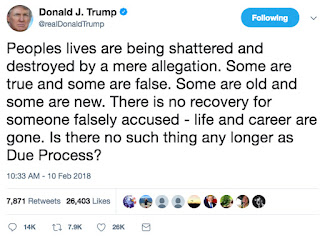 I am writing this item to address our natural impatience.  All of us have seen politicians and their enablers go out and essentially flaunt the law.  Others such as my self have investigated the genesis of many important decisions in many areas including medical in particular and easily locate a troubling stream of behavior that is best described as corrupt.  That is the direct evidence.  At the same time we all mostly understand human behavior and understand that the easy road is to initiate a corrupt practice.

My key point though is that it is easy to be a witness to a criminal act.  The correction of that criminal action is hard and demands due process.  This takes a lot of time.  Weeks and months elapse.

We had a riot in Vancouver caught on ample camera points.  At the same time riots took place in England, folks were arrested and no charges were ever possible and they were all released almost immediately.  In Vancouver they applied due process.  In a few weeks arrests took place and convictions secured.  Do you think that this encourages similar behavior next opportunity?  Of course not.  Everyone knows that they will pay.

Two years ago Trump elected to apply the full power of due process with no deals and unleashed the full investigative powers of the State to fully correct the festering corruption of the whole governmental apparatus.  That is why thousands of pedophile cases have finally gone forward double step.  That is why there is now 55,766  sealed indictments outstanding while he cleans up the whole judiciary as well.

Feeding this monumental housecleaning is the astounding reality that since 9/11, we have collected all electronic communication, particularly in government.  Thus the same guys who found Saddam Hussein can identify networks and review cash transfers to establish probable cause.  A computer does all the hard work.  A couple of interviews later and you have written confessions and disgorgement.

Then you let them usually go back to work until you are ready to drop the indictment itself knowing that most will then be on best behavior at least.

We all want to see those indictments out.  Yet just what is the rush?  Look at how he cleaned out the FBI.  All those guys were toast the day he moved in.  Yet he kept them on the hook to do his bidding and to extract as much value as possible in terms of information.  There are still a few more to go, but when the new FBI head actually takes over, he will have a clean house.  Now do you understand why Jeff Sessions had to recuse himself?  He could hardly be party to an enterprise operated by potential criminals under real investigation.

It is all profoundly historic.