Churchill, Hitler and "The Unnecessary War" with Pat Buchanan 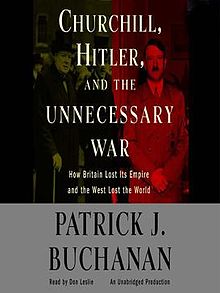 I had largely come to this opinion years ago but reading this book rather clearly makes the whole argument.  The only thing missing in this mix was the continuing pressure from Russia at the same time that set up the French opportunity  to play revenge.

Churchill's grasp of strategy was always lacking and famously so.  That he strengthened Grey before the WWI led directly to the central decision of jumping into France without an escape strategy was a complete folly that ultimately allowed the American's to dismantle the British Empire which was also folly of the American kind...

I was brought up in a school system still loyal to the British Empire. My teachers had lived and participated in WWII.  I have always thought that the decision to help France was the death of the Empire and unforgivable.  When it went quickly wrong, they never got out.  They could have at any point.  How stupid is proven over and over again.

It is a bracing reminder of just how wrong headed a political leader can be and how baleful his influence.
,
.
Churchill, Hitler and "The Unnecessary War": How Britain Lost Its Empire and the West Lost the World

https://www.goodreads.com/book/show/2258833.Churchill_Hitler_and_The_Unnecessary_War_
Were World Wars I and II—which can now be seen as a thirty-year paroxysm of slaughter and destruction—inevitable? Were they necessary wars? Were the bloodiest and most devastating conflicts ever suffered by mankind fated by forces beyond men’s control? Or were they products of calamitous failures of judgment? In this monumental and provocative history, Patrick Buchanan makes the case that, if not for the blunders of British statesmen—Winston Churchill first among them—the horrors of two world wars and the Holocaust might have been avoided and the British Empire might never have collapsed into ruins. Half a century of murderous oppression of scores of millions under the iron boot of Communist tyranny might never have happened, and Europe’s central role in world affairs might have been sustained for many generations.

Among the British and Churchillian blunders were:

• The secret decision of a tiny cabal in the inner Cabinet in 1906 to take Britain straight to war against Germany, should she invade France
• The vengeful Treaty of Versailles that mutilated Germany, leaving her bitter, betrayed, and receptive to the appeal of Adolf Hitler
• Britain’s capitulation, at Churchill’s urging, to American pressure to sever the Anglo-Japanese alliance, insulting and isolating Japan, pushing her onto the path of militarism and conquest
• The 1935 sanctions that drove Italy straight into the Axis with Hitler
• The greatest blunder in British history: the unsolicited war guarantee to Poland of March 1939—that guaranteed the Second World War
• Churchill’s astonishing blindness to Stalin’s true ambitions.

Certain to create controversy and spirited argument, Churchill, Hitler, and “The Unnecessary War” is a grand and bold insight into the historic failures of judgment that ended centuries of European rule and guaranteed a future no one who lived in that vanished world could ever have envisioned.
Posted by arclein at 12:00 AM

Politicians are often marketing masters, but they're largely of modest intelligence.

If one accepts the 2 SD IQ communication gap, then it's clear that the entire political process is isolated from people of unusual, but common-enough intelligence (IQ 140-plus.)

No wonder history is a tapestry of blind stupidity. We're always ruled by midwits who are advised by the epitome of Dunning-Kruger Syndrome.