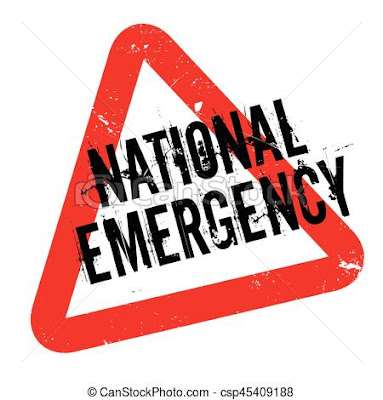 This has been out for sometime and it is what this is all heading for.  Thus we see the natural desperation of the so called left.

It is still an arm wrestle but we now have 55,6077 sealed indictments and we are days away from having control of the supreme court.  The President has determined that there is a Socialist insurrection underway and he is moving against it.

The shock of seeing perhaps of hundreds of actual traitors been shot should allow for a major global settlement as well.

Please do observe though that Trump undertakes one major thing at a time.  Fully reforming  American governance may be a generational task after this is done..

(Natural News) THIS IS A NATIONAL EMERGENCY SPECIAL REPORT

This is fully covered, with accompanying documentation from the U.S. Federal Register, in the links and video below. (This author is fully supportive of this effort to save America and arrest the traitors.)

The confirmation of Kavanaugh to the U.S. Supreme Court is the key to getting this done in a timely manner, which explains why the deranged Left is going to such outrageous extremes to fabricate false allegations against Kavanaugh and stage coordinated, well-funded protests to try to block the U.S. Senate from confirming him.

Once Kavanaugh is on the court, it will add the necessary support for constitutional “emergency powers” that concentrate power in the executive branch of government (currently headed by President Trump) during times of war and national emergencies.

FACT: The United States has been operating under a state of declared war since September, 2001, following the 9/11 attacks.

FACT: The United States has been operating under a declared national emergency, signed by President Trump, since December 20, 2017 (see proof document, below).

President Trump, I believe, has decided to go to bat for America and utterly destroy the anti-American deep state crime ring that has been working for years to destroy this nation and end its national sovereignty. This will be Trump’s legacy. He may not even run for re-election after 2020, since his entire plan to arrest the traitors and restore the rule of law in America will require him to step aside once certain goals are accomplished (see detailed explanation below).

Note that in order to accomplish this, President Trump will need to declare temporary martial law. (UPDATE: See clarification about “martial law” in the video appended to the end of this article.) He will need our support during this time to maintain order and civility across the nation as the arrests and trials of deep state traitors are under way. We should all expect mass violence and chaos from the Left, which is following the “Rules for Radicals,” a blueprint for communist revolts and violent overthrow attempts of governments.

See the documents for yourself… this is all posted on the U.S. Federal Register government website

Here are the links to the documents cited in this comprehensive video:

This document specifically describes the crimes of Hillary Clinton, Barack Obama, James Comey and Robert Mueller under the “corruption” section, alluding to the Uranium One scandal and Obama’s multi-billion dollar money laundering operation that handed nuclear weapons capabilities to Iran. It says that the executive order targets, “any foreign person determined by the Secretary of the Treasury, in consultation with the Secretary of State and the Attorney General… to be a current or former government official, or a person acting for or on behalf of such an official, who is responsible for or complicit in, or has directly or indirectly engaged in… corruption, including the misappropriation of state assets, the expropriation of private assets for personal gain, corruption related to government contracts or the extraction of natural resources, or bribery…”

This describes precisely what Clinton, Comey, Mueller, Obama, Brennan, McCabe and others carried out under the Obama regime. These are more than just felony federal crimes; they are acts of treason against the United States of America, carried out during a time of declared war.

From that document, here is President Trump’s declared national emergency:

I therefore determine that serious human rights abuse and corruption around the world constitute an unusual and extraordinary threat to the national security, foreign policy, and economy of the United States, and I hereby declare a national emergency to deal with that threat.

Although much more difficult to read, this document essentially establishes the preservation of the government’s right to prosecute crimes of treason and deep state collusion against America, all of which may be prosecuted via military tribunals under existing U.S. law.

To accomplish this, President Trump must announce temporary martial law

For the record, I wholly support this effort to arrest and prosecute the thousands of deep state traitors who have become a cancer upon America. Were you aware that James Comey was a communist? John Brennan, of course, has remained a communist for his entire adult life, and Barack Obama was a radical Muslim who despised America and worked every day to undermine it through a variety of nefarious means (including allowing U.S. military encryption technology to be captured by Iran via the U.S. drone “GPS spoofing” incident).

For a full, detailed explanation of Obama’s treasonous crimes against America, watch this extremely important video from REAL.video (it has been banned from YouTube for obvious reasons):

Hillary Clinton, Barack Obama, John Brennan, Andrew McCabe, Loretta Lynch, Peter Strzok and a long list of other traitors have been conspiring for years to destroy America from within and see it replaced with a communist regime run by authoritarian globalists. Tech giants like Apple, Google and Facebook are all part of the plan, which is exactly why you’ve seen every one of them working closely with China to roll out authoritarian techno-tyranny infrastructure systems that plan to enslave every citizen of the world, making them powerless and obedient to a globalist technocracy that runs the “one world government.”

Trump’s plan to rescue America from the globalists

In order to halt this global dictatorship and defend America against traitors who are working to destroy it, President Trump must carry out the following actions:

2) Invoke the national emergency powers which are constitutionally granted to the executive branch of government. (Technically, this already happened in 2017.)

3) Invoke President Obama’s executive order 13618 and seize control of Google, Facebook, CNN, Washington Post and the New York Times to halt the treasonous lies, coordinated election fraud and political coup attempt which is being run by all these traitors of America.

4) Use all controlled communications channels to publicly declare the details of the crimes (and criminal actors) which have been committed against America. Disclose everything to the America people about how their country had been overrun and destroyed from within.

5) Order military police to find and arrest thousands of deep state traitors who have been deliberately undermining America from within. This will include hundreds of people inside the FBI and DOJ, plus hundreds more in the State Department and other agencies. Arrests must also include traitorous, corrupt federal judges who have deliberately undermined America by, for example, blocking Trump’s constitutional travel ban to protect America from enemy terrorists. Many traitors will attempt to flee the country, of course, and they will need to be located and brought to justice like former Nazi war criminals.

6) Issue an executive order demanding national voter ID for all future elections. No longer will America tolerate democracy being stolen by the votes of illegals who are granted voting rights by California and other complicit, anti-America states or cities.

7) Suspend elections during the military tribunals, but lay out a timeline for the restoration of elections and nationwide voting (with voter ID in place) to restore the rule of law and give America back to the American people.

8) Deploy the U.S. military along the southern border. Use the U.S. Army Corps of Engineers to build the wall.

9) Promise to resign the presidency once the rule of law is restored in America, signaling to the American people that Trump plans to hand over power to the next elected President within a reasonable time period. Americans will rightly be concerned about martial law morphing into a military dictatorship. Trump needs to assure the American people that his job is to destroy the deep state, restore the rule of law, then get out of the way and retire as the greatest U.S. President in history — the President who saved America from traitors and communists.

The American people will not tolerate a permanent military dictatorship in America, but they will tolerate temporary martial law needed to drain the swamp, arrest the traitors and restore the rule of law.

During this time, by the way, the entire FBI likely needs to be disbanded and rebuilt from scratch. The agency’s credibility has been utterly destroyed by the actions of James Comey, Peter Strzok and others.

Earlier today, Alex Jones picked up this story and republished the article and video at InfoWars.com. This resulted in a huge audience seeing this video, which of course generated a flurry of comments (and some criticism). The biggest question coming out of this was: Do I support martial law under Trump?

To answer this, I’ve posted an additional video. It explains how we are already under martial law control of the deep state, and why Trump needs to assert his own executive power to clean out the swamp and ultimately restore America to its constitutional republic status. I’ve even suggested that after this is accomplished, Trump should resign and step aside, handing back our country to the people.

What most people fail to realize is that we’ve been living under many forms of “martial law” put in place by Obama that are still damaging America and its citizens to this very day. For example:
The question is not whether you want to live under martial law; the question is whether you want to continue to live under Obama’s “deep state martial law” where the media, the courts, the prosecutors, the tech giants, the IRS and every other element of the deep state is targeting conservatives and Trump supporters for complete destruction.

In order to defeat Obama’s deep state treason, we are going to have to go through a “lock down” period that will enable President Trump, in conjunction with the U.S. military, to carry out the necessary arrests and prosecutions of deep state traitors who have infiltrated every level of the U.S. government. This “lock down” period needs to be supported by all patriots to give Trump the time he needs to achieve a clean sweep of deep state traitors who, as he explains, have become “a cancer” on America.

Make no mistake: America is a nation under siege right now. President Trump will need to invoke extraordinary powers to defeat the deep state and deliver America back to the people.
Watch my follow-up video for a more detailed explanation: