Electricity boosts crop yield by 30% while reducing pesticides and fertilizers 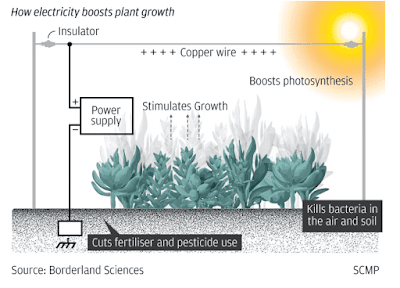 This is extremely good news.  Those wires also produce a pulse of ultraviolet radiation which also empowers the living plant.  Even then the collateral benefits are real and significant as well.  I can also see using this in open field conditions as well.  Plants can also be in contact as well as we operate on dry days.
We already use trellis wire everywhere and running a hot wire is no trick at all.  Pulsing power also makes it safe against accidental contact as anyone who has worked with cattle fencing knows.  Managing it all is also practical as well and can even be sent off site once the wires are in place.
I would also double back on row crops as well in order to test for line loss and generally use pruning to keep the lines generally clear enough.
Further experiment may even open up frequencies that inhibit insect pests as well.  After all if you have it in place, it makes good sense to discover what else.
.
Electricity boosts crop yield by 30% while reducing pesticides and fertilizers


China uses electricity instead of chemical pesticides and fertilizers to boost the growth of vegetables and fruits.

Electricity boosted vegetable output by 20 to 30 percent. Pesticide use has decreased 70 to 100 percent. And fertilizer consumption has dropped more than 20 percent.

One hectare of electrified greenhouse requires about 15 kilowatt-hours of electricity per day, which is about half the power usage of an average American family. In just two years the electrified vegetables had brought in extra revenue of nearly 1.2 million yuan (US$175,000) for one company.

Inside the greenhouse the air smells like the aftermath of a summer thunderstorm. Humidity is low and the plants rarely get sick.


The biggest expense is the installation cost which can be costing tens of thousands of yuan (a few thousand dollars per hectare).

China has been conducting the world’s largest experiment and the results are transforming agricultural production in the world’s most populous nation with a jolt.


Across the country, from Xinjiang’s remote Gobi Desert to the developed coastal areas facing the Pacific Ocean, vegetable greenhouse farms with a combined area of more than 3,600 hectares (8,895 acres) have been taking part in an “electro culture” programme funded by the Chinese government.

The vegetables grow under bare copper wires, set about three metres (10 feet) above ground level and stretching end to end under the greenhouse roof. The wires are capable of generating rapid, positive charges as high as 50,000 volts, or more than 400 times the standard residential voltage in the US.

The high frequency electricity kills bacteria and virus-transmitting diseases in the air or soil. It also suppresses the surface tension of water on leaves, accelerating vaporization.

Within the plants, the transport of naturally charged particles, such as bicarbonate and calcium ions, speed up and metabolic activities, like carbon dioxide absorption and photosynthesis, also increase.

The electric current flowing through the wires is only a few millionths of an ampere by volume – lower than a smartphone cable’s workload.

“It does absolutely no harm to the plants or to humans standing nearby,” he said.

Thanks to the positive findings of the study, the area devoted to electrified farms in China is now growing with unprecedented speed, according to Liu, from 1,000 to 1,300 hectares each year.

40% growth in electro culture farming could be achieved within the next 12 months.