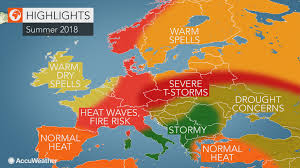 What this reveals is that these global structures are actually changing slowly in a decadal fashion and are surely the best explanation for decadal weather extremes.  History also tells us that this will also reverse and this may well belinked to the known hurricane super cycle as well.
The cycle described is essentially mature.  A slow reversal is now in order.
I am even more convinced that our knowledge of climate generally is still in its infancy and look forward to the complete re greening of the Sahara and the Middle East. This would have a huge effect on this phenomena in particular..
.
.‘STATIONARY WAVES’ FUEL EXTREME WET AND DRY WEATHER

New research that examines the role of stationary low- and high-pressure systems projects that global warming will spawn more extreme wet and dry weather around the world.

The intensity of subtropical stationary waves during northern summers increased from 1979 to 2013, and projections suggest the increase will accelerate as the climate warms, the study says.

Subtropical stationary waves may serve as an important link connecting regional droughts and extreme rainfall events with global warming, the study says. Such extremes, which have increased significantly in recent decades because of a warming climate, can cause enormous economic losses and threaten lives.

Examples of extreme events include catastrophic floods in South Asia during the 2017 monsoon season, which killed about 1,300 people died and affected more than 45 million people, according to a United Nations Children’s Fund report. A severe drought afflicted Texas in 2011, with the Texas AgriLife Extension Service estimating direct agricultural losses at $5.2 billion.

The findings appear in the Journal of Climate.

Scientists from Duke University and Georgia Institute of Technology also contributed to the study.
Posted by arclein at 12:00 AM