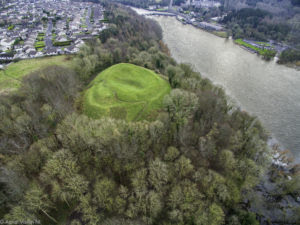 What is interesting is that humans imported red deer after the Mesolithic. The red deer provided both dairy and riding,  Considering that copper mining began around 2400 BC at Grand Manaan in Wales or a little sooner, it follows that deer husbandry was introduced then as the shipping was then available.   The same husbandry  was also introduced into Georgia and its mining as well at around the same time which also coincides with copper mining in Lake Superior.

The more dates that i see, the more likely it is that the building of the Great Pyramid spurred the full onset of the European Bronze Age around 2400 BC rather than much earlier. This was a global event as well as adventurers spread out and scoured the world for copper sources and other useful products as well.  It was the foundation of the Atlantean sea borne Empire.

Earlier local events do exist but those are not likely connected well although i do think sea traders did reach out everywhere.  It was the copper trade as a form of currency that then drove it all.

Mount Sandel lies on a high bluff overlooking the River Bann and it is the remains of a small collection of huts provide evidence of the first people who lived in what is now Ireland. The County Derry site of Mount Sandel is named for its Iron Age fort site, believed by some to be Kill Santain or Kilsandel, famous in Irish history as the residence of the marauding Norman king John de Courcy in the 12th century AD. But the small archaeological site east of the remains of the fort is of far greater importance to the prehistory of western Europe.

Radiocarbon dates at the site indicate that Mount Sandel is among the earliest human occupations in Ireland, first occupied around 7000 BC. Stone tools recovered from the site include a huge variety of microliths, which as you can tell from the word, are tiny stone flakes and tools. Tools found at the site include flint axes, needles, scalene triangle-shaped microliths, pick-like tools, backed blades and a very few hide scrapers. Although preservation at the site was not very good, one hearth included some bone fragments and hazelnuts. A series of marks on the ground are interpreted as a fish-drying rack, and other diet items may have been eel, mackerel, red deer, game birds, wild pig, shellfish, and an occasional seal.

The site may have been occupied year-round, but if so, the settlement was tiny, including no more than fifteen people at a time, which is quite small for a group subsisting on hunting and gathering. By 6000 BC, Mount Sandel was abandoned to the later generations.

Red Deer and the Mesolithic in Ireland

Irish Mesolithic specialist Michael Kimball (University of Maine at Machias) writes: "Recent research (1997) suggests that red deer may not have been present in Ireland until the Neolithic (earliest solid evidence dates to around 4000 bp). This is significant because it implies that the largest terrestrial mammal available for exploitation during Ireland's Mesolithic may have been the wild pig. This is a very different resource pattern than that which characterizes most of Mesolithic Europe, including Ireland's next door neighbor, Britain (which was chock full of deer, e.g., Star Carr, etc.). One other point unlike Britain and the Continent, Ireland has NO Paleolithic (at least none has yet been discovered). This means that the Early Mesolithic as seen via Mt. Sandel likely represents Ireland's first human inhabitants. If the pre-Clovis folks are right, North America was "discovered" before Ireland!"

The Mesolithic site at Mount Sandel was excavated during the 1970s by Peter Woodman of University College Cork. Woodman found evidence of up to seven structures, at least four of which may represent rebuildings. Six of the structures are circular huts of six meters (about 19 feet) across, with a central interior hearth. The seventh structure is smaller, only three meters in diameter (about six feet), with an exterior hearth. The huts were made of bent sapling, inserted into the ground in a circle, and then covered over, probably with deer hide.
Posted by arclein at 12:00 AM