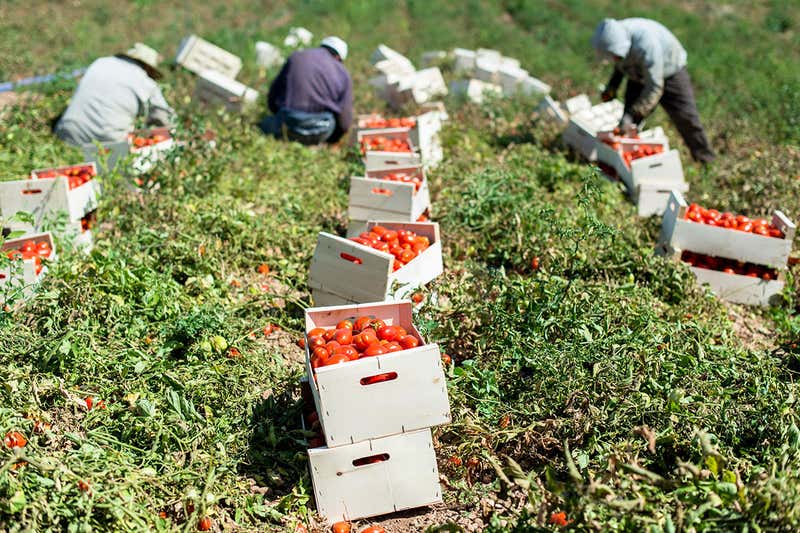 The power of CRISPR is been unleashed.  This is really huge and will finally open the door to a flood of successful GMO foods.  What is better, we will want them.  After all, what we do not want is egregious monopoly building at the expense of farmers and consumer health.

This will collapse the cost of new product development.  This puts a flood of product into the market.

Why not make a protein rich corn that is also nitrogen fixing.  Can we do the same for all our grains as well?   That is were the market is.

Then we have the challenge of creating superior vegetarian food options.

My point though is that time has collapsed and we will have many new crops every year showing up now.
.
Domesticating tomatoes took millennia – we can now redo it in 3 years
1 October 2018
By Michael Le Page


It took at least 3000 years to domesticate the tomato. Now two separate teams in Brazil and China have done it all over again in less than three years – only better in some ways, as the redomesticated tomatoes are more nutritious than the ones we eat now.

This approach, which relies on the revolutionary CRISPR genome editing technique, could not only improve existing crops, it could also be used to turn thousands of wild plants into far more useful and appealing crops. In fact, a third team in the US has already begun to do this with a relative of the tomato called the groundcherry.

This fast-track domestication could help make the world’s food supply healthier and far more resilient to climate change and diseases, such as the rust fungus devastating wheat crops.


“This could transform what we eat,” says Jorg Kudla at the University of Munster in Germany, a member of the Brazilian team. “There are 50,000 edible plants in the world, but 90 per cent of our energy comes from just 15 crops.”

“We can now mimic the known domestication course of major crops like rice, maize, sorghum or others,” says Caixia Gao of the Chinese Academy of Sciences in Beijing. “Then we might try to domesticate plants that never been domesticated.”

Wild tomatoes, which are native to the Andes region in South America, produce pea-sized fruits. Over many generations, peoples such as the Aztecs and Incans transformed the plant by picking mutants with desirable traits such as larger fruit.

But every time a single mutant is plucked from a larger population for breeding, much genetic diversity is lost. And sometimes the desirable mutations come with less desirable traits. For instance, the tomato strains grown for supermarkets have lost much of their flavour.

By comparing the genomes of modern plants to their wild relatives, biologists have been working out what genetic changes occurred as plants were domesticated. The teams in Brazil and China have now used this knowledge to reintroduce these changes from scratch while maintaining or even enhancing the desirable traits of wild strains.

Kudla’s team made six changes altogether. For instance, they tripled the size of fruit by editing a gene called FRUIT WEIGHT, and increased the number of tomatoes per truss by editing another called MULTIFLORA.

While the historical domestication of tomatoes reduced levels of the red pigment lycopene – thought to be good for us – the team in Brazil managed to boost it instead. The wild tomato has twice as much lycopene as cultivated ones; the newly domesticated one has five times as much.

“They are quite tasty,” says Kudla. “A little bit strong in taste. And very aromatic.”

The team in China redomesticated several strains of wild tomatoes with desirable traits lost in domesticated tomatoes. In this way they managed to create a strain resistant to a common disease called bacterial spot race, which can devastate yields. They also created another strain that is more salt tolerant – and boosted levels of vitamin C.

“We will taste them when the plants are mature next month,” says Gao.

Meanwhile, Joyce Van Eck at the Boyce Thompson Institute in New York state decided to use the same approach to domesticate the groundcherry or goldenberry (Physalis pruinosa) for the first time. This fruit looks similar to the closely related Cape gooseberry (Physalis peruviana).

Groundcherries are already sold to a limited extent in the US but they are hard to produce because the plant has a sprawling growth habit and the small fruits drop off when ripe. Van Eck’s team has edited the plants to increase fruit size, make their growth more compact and to stop fruits falling off.

“There’s potential for this to be a commercial crop,” says Van Eck. But taking the work further would be expensive because of the need to pay for a licence for the CRISPR technology and get regulatory approval.

This approach could boost the use of many obscure plants, says Jonathan Jones of the Sainsbury Lab in the UK. But it will be hard for new foods to grow so popular with farmers and consumers that they become new staple crops, he thinks.

The three teams already have their eye on other plants that could be “catapulted into the mainstream”, including teff, foxtail, oat-grass, amaranth and cowpea. By choosing wild plants that are drought or heat tolerant, says Gao, we could create crops that will thrive even as the planet warms.

But Kudla didn’t want to reveal which species were in his team’s sights, because CRISPR has made it so easy. “Any one with the right skills could go home to their lab and do this.”