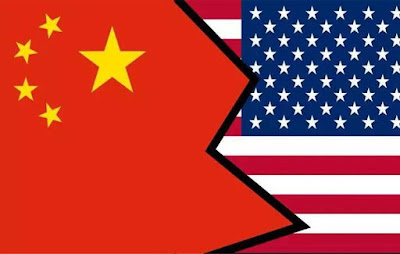 What is at stake her is that China needs to completely reform it internal economic and political systems wghich they have put off for a long  time allowing only small incremental shifts.

Most of what we see now will be settled rather quickly. Confronting China over its dirty tricks can be charged out by charging out the costs and then negotiating a resolution.  This really needs to be done.

While this is been done,   The USA can simply declare China as a non conforming member and block USA investment, encouraging transition to India and elsewhere.  This will force corporations to actually move elsewhere..

Alibaba’s Jack Ma has warned that the ongoing US-China trade war could last at least 20 years. As we’ll see, it’s actually more like 30 – up to 2049, the 100th anniversary of the foundation of the People’s Republic of China (PRC).

Steve Bannon always boasted that President Trump was bound to conduct a “sophisticated form of economic warfare” to confront China.

The logic underpinning the warfare is that if you squeeze the Chinese economy hard enough Beijing will submit and “play by the rules.”

The Trump administration plan – which is, in fact, trade deficit hawk Peter Navarro’s plan – has three basic targets:
The overarching concept is that unending confrontation with China is bound to scare companies/investors away.

There’s no evidence South Korean or German conglomerates, for instance, would withdraw from the vast Chinese market and/or production facilities.

And even if the Flight Away from China actually happened, arguably the American economy would suffer as much, if not more, than China’s.

The latest US tariff volley may lower China’s GDP by only 0.9 percentage points, according to Bloomberg Economics. But China may still grow a healthy 6.3% in 2019.

This is a decent overview, with numbers, of what the trade war might cost China.

What’s certain is that Beijing, as confirmed by a rash of editorials in Chinese state media, will not just play defense.

Beijing sees the trade war as “protracted.” A Commercial Cold War 2.0 atmosphere is now in effect but China is fighting the ideological war on two fronts. At home, Beijing is using strong language to define its position against the US but taking a significantly softer approach in the international arena.

It’s extremely helpful to understand how the current situation has arisen by examining the work of Wang Hui, a professor of Chinese language and literature at Tsinghua University, top essayist and the star player of China’s New Left.

Hui is the author of the significant The Rise of Modern Chinese Thought, published in 2005 and still without an English translation.

Some of Hui’s key conclusions still apply 13 years later, as he explains how Chinese society has not yet adapted to its newfound status in international relations; how it has not solved the “accumulated contradictions” during the breathtakingly fast process of marketization; and how it still has not mastered the inherent risks in the globalization drive.

Hui’s analysis is echoed in many a Chinese editorial including delicious throwback lines such as the “sharpening of internal contradictions” in international relations. After all “socialism with Chinese characteristics,” as codified by Deng Xiaoping and renewed by Xi Jinping, excels in exploiting and bypassing “internal contradictions.”