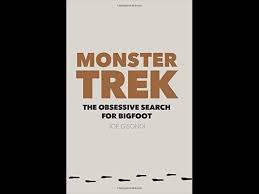 
“Bigfoot are reported across all social, educational, and economic classes,” writes journalist and professor Joe Gisondi in his new book Monster Trek: The Obsessive Search for Bigfoot.


Gisondi sets out to push beyond those stereotypes of bigfoot researchers as crackpots, as “nuts, crazies, loons, batty, daft, screwy, unbalanced, or idiotic.” Accompanying them on expeditions in search of bigfoot, he interviews pharmaceutical company employees, public relations practitioners, and environmental scientists who all have one thing in common: their interest in proving the existence of a giant creature that sends electromagnetic impulses, knocks on trees to indicate its location, and crawls soundlessly on its belly to observe humans.


Some researchers call themselves “not believers but knowers” while others admit to skepticism. Some see their mission as “akin to finding the Holy Grail.” Many are surprisingly self-effacing. Gisondi’s quest takes him on treks through isolated wooded areas, alligator-infested swamps, and moonless graveyards as he seeks to understand those who search for bigfoot.


“Whether bigfoot exists does not matter,” he claims at one point. “I’m just curious as to what drives those who search for bigfoot.” But then he adds, “Those are lies, of course,” conceding that his journey is more than an intellectual one.


Instead, it becomes an entry into examining his own search for religious faith, a springboard for a thoughtful discussion about journalism’s responsibility, and an excuse to bring to bear his impressive travel and nature writing skills. Some of the best writing focuses on the diverse geography, landscapes, and cultures of areas with bigfoot sightings, from North Carolina to Oklahoma to Wyoming.


Gisondi admits to a fascination with the paranormal since childhood as well as a struggle with religious faith since his teenage years. “Bigfoot, for me, offer a litmus test of sorts,” he says.


“Searching for bigfoot is somewhat like searching for one’s faith. If something as unlikely as bigfoot can exist, perhaps that indicates that other unlikely things may also exist—like heaven and an afterlife. I’ve never seen a bigfoot, but I’ve now viewed footprints allegedly left by one. That’s my experience with religion. I was not there with Jesus, but I have read the Gospels and Epistles.”


While Gisondi presents his quest with humor, his preoccupation with faith also allows him to remain sympathetic to his subjects. After all, he writes, “What sounds more bizarre: that a bigfoot researcher has glimpsed an undiscovered primate living in the woods or that a man was killed and came back to life and his body and blood are contained in the Eucharist offered from the altar?”


Gisondi resists becoming a stereotypical flip journalist “asking impertinent questions and writing audacious, smart-alecky stories,” choosing to investigate rather than attempting to erode the dignity of his subjects.


“It’s easy to make fun of anyone associated with bigfoot, an assignment topic that causes TV and print reporters to froth rapidly, knowing they’ll have an easy, humorous assignment … As journalists, we are obligated to minimize harm and seek truth … yet journalists who write about bigfoot constantly shred these codes … with bigfoot, readers expect fruitcakes and New Age loonies. So journalists deliver.”


Instead, Gisondi focuses on balanced characterizations of those he interviews and follows, portraying them in all their quirky and thoughtful complexity. Ultimately, he concludes, if nothing else, that bigfoot researchers are “among the most passionate people on the planet.”


“I’m learning the search for bigfoot requires a skeptical mind, one that is sharpened by reflection, inquiry, and interrogation,” Gisondi writes.


“While one may be a doubter, agnosticism dulls the intellect. While one may have faith, ideologies limit vision. To learn the truth, neither extreme is helpful. And the best we can ask for, in the end, is to think more deeply than we did before, to have faith that something exists beyond ourselves. That is the ultimate mystery that keeps us searching for the truth.”
Posted by arclein at 12:00 AM