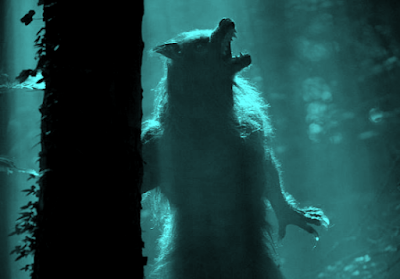 This is a superb sighting of an actual pack of Giant Sloths.  It was also done by an expert woodsman.  Note that it most resembles a timber wolf as do our other Dogman sightings.   His first sighting caught the animal leaping across a road in front of him.

It certainly explains why the locals all vacated their cabins.  Curious carnivores is one thing, but a hungry one is another matter.

The sheer power of these animals is extraordinary and I suspect hat they can even challenge a Black bear.  Recall they have long sharp claws on  both hands and feet and can easily gut a victim.  Nothing walks away from them which is why we never get stories but only sign..


I decided that I would share some of my grandfather’s stories he told me about his time working as a forester in Michigan’s Manistee National Forest. He never got a chance to write any of his experiences down so I thought I might post them here.

For some background, my grandpa started working in the Manistee area in 1949, when he was 28 years old. Before then he had been drifting around the region, doing odd jobs in logging until he was hired by the Forest Service in the northwest part of Michigan’s Lower Peninsula. The work, as I understand, was slow and most days he and his crew were sent to different parts of the Forest to address various tree and land concerns. Grandpa was always an avid outdoorsman, and he enjoyed hunting and fishing just about as much as anyone in the region.

Sadly he died in the December of 1998, when I was still rather young, but I remember whenever we went to visit him and Grandma he would sit my brother and me down and tell us about his days in the Forest Service. Working outside every day allowed him to witness all sorts of wildlife, like black bear, whitetail, fox, and even bobcat back in those days. He often relived his encounters with bears while he was deep in the forest, telling us that those moments were some of the most memorable of his life, being up close to such beautiful and powerful animals. Usually his tales were exciting, and the enthusiasm with which he told them inspired us to go out to the backyard and look for animals in between the pines. Although there wasn’t much wildlife around Grandma and Grandpa’s property, they still always kept a close eye on us and never let us wander too far from the house. Finally, a few years before his death, Grandpa deemed my brother and me old enough to be told why.

I was about nine, and my brother was about 11 when Grandpa first opened up about the strangest things that had ever happened to him. All our childhoods we had heard him go on and on about the peace that the wilderness brought him, or used to bring him, but this time his tone was completely different. I don’t remember all the details, but I asked my brother to help piece together Grandpa’s story, and my dad as well (he too had heard of the experiences in question, multiple times).

It was the mid-fifties (he never gave the exact year), and October had rolled in behind cool autumn breezes and the sound of Canada geese flying southward. The first of his strange stories had occurred at night, as he was driving home from a local bar where he and his crew had spent the last few hours after work. It was a windy night, and the pines on either side of the road were blowing ferociously. No moon or stars could be seen through thick cloud cover, so the only illumination of the road ahead came from Grandpa’s headlights. By his reckoning, he must have been going close to 50 miles per hour at the very moment when something huge leapt across the road not 20 feet ahead of him. His headlights had shown the animal’s silhouette; it was dog-shaped, but massive, almost stretching all the way across the road. It only made one bound to get from one side to the other, and its size alone was enough to unnerve Grandpa. At the time, he had assumed that the animal was just a very large wolf, except timberwolves hadn’t been spotted in that region for decades. He considered it a bizarre encounter, but nothing came of it that night and he was able to return home without anything else strange happening to him.

The second of his stories admittedly frightened me enough to avoid going outside at night for years; even now I’m wary of noises in the dark because of the obvious fear in Grandpa’s voice when he told us of his second experience. Some details here were provided by my dad.

It occurred in the same month as his first encounter, a few weeks later, on a night that was pretty cold for the season; it maybe hit 40 degrees, but it was a calm night with little wind. Grandpa’s house at the time was really small, and it stood in a lot with about six other similarly-sized and built edifices. None of his neighbors tended to stay up very late, so it surprised him to be awakened by loud noises at about one in the morning. They sounded like scratching on sheet metal, with occasional thumps and bumps like an animal was trying to get in. Grandpa apparently got up, fetched a flashlight, put on his boots, and went out into the front room (the walls of which consisted of mosquito screens stretched between wooden framework). Once in the front room, Grandpa could hear the sounds more clearly, and they were coming from the nearest of his neighbor’s homes maybe fifty yards to his right. It was incredibly dark out there, with no streetlights to illuminate. The neighbor’s house had a porch light on, but Grandpa couldn’t make out what was creating the racket through the screen, so he slowly opened the front door and looked out. He described to us in great detail the animals that he saw there, and he always said he would remember them exactly as they were, for fear brands memories the strongest.

Three massive dogs covered in long black hair were up against his neighbor’s house, scratching at the siding and making visible claw marks with every swipe. Each beast stood about seven feet tall, with their front legs stretching for another two or three feet and easily reaching the roofing and the gutter of the house. Their scratching, however, did not make it seem like they were trying to get into the house, as Grandpa explained. He thought that they were doing that to get whoever was inside out. The next part was actually the hardest to get out of Grandpa; it was strange that he was so eager to tell us everything thus far, despite how he felt about the subject, but he was rather hesitant as I remember to divulge the last horrifying details of his encounter.

He claims that the animals then noticed that he had emerged from his own house, just across the lawn, for each one turned to look straight at him, just fifty yards away. They had pointed ears like a wolf’s, and huge bodies that rivaled large black bears in size. They also supported themselves not with four legs, like any other native mammal, but instead they stood on two legs each, towering seven feet above the ground. The sounds that they proceeded to make, Grandpa had said, would haunt his dreams for the rest of his life. It was a shame that he could neither produce recordings nor accurately mimic the un-wolflike screams the animals made, for that detail always fascinated me the most about his story. They didn’t sound like foxes, coyotes, or bobcats; instead they forced half-scream, half-howls out of their jaws that Grandpa was sure held the teeth of a carnivore.

Grandpa never told us exactly what happened next; I guess we assumed that he ran inside, locked the doors, and didn’t look outside until morning. He would tell us that four of his neighbors (including the elderly couple that lived in the nearest house) didn’t stick around very long. He did say that he tried to talk to them about what had happened that night, but they remained evasive and never gave him any straight answers. That turned out to be somewhat ironic, because Grandpa himself kept tight-lipped about many of the details of his stories. He would say that he heard those exact screams on two other occasions, both times while he was in the Manistee Forest, and he showed us an old Forest Service report detailing a possible timberwolf sighting in the area (complete with photographs of huge padded paw prints in mud).

The thing is, Grandpa never told anyone his stories but his most trusted family, which is unique among Michigan Dogman witnesses. After the craze that Steve Cook’s “Legend” song stirred in the eighties, it’s no wonder that so many stories from the region surfaced. I had heard a few bits and pieces about the so-called monster before Grandpa told his tale, but it wasn’t until later in life that I realized his encounters had to have been with the same creature. Whether I believe him that massive wolves walk upright through Michigan forests, well I’m still not so sure. But as a modern zoological curiosity, the stories of strange beasts from a passionate woodsman who knew his wildlife certainly remain among the most remarkable I’ve heard, simply because of the genuine emotion with which he related his tales.

Legends like these might just be figments of our collective imagination, so all I can do is present what I’ve heard, and let others judge for themselves what is real and what is pure fiction.