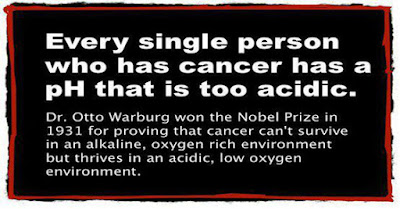 I would love to winkle out a simple take home here.  This explains why certain diets support cancer suppression.  All good.

I do think that we have determined another natural market for hydronian enriched water.  That is normally a solution of H3O3 which is a natural ring molecule carrying an extra bio-available oxygen atom.  It supplies all the oxygen used the ocean and our biologically active ground waters.

Cancer patients drinking that would have oxygen enriched blood which would quickly saturate the whole body.  That should reverse the effects of cancer.  This also explains the real problem of persistence with cancer.
.

Cancer involves an interaction between rogue cells and surrounding tissue. This is the clear message of Dr. Mina Bissell. The health or sickness of surrounding cells and the surrounding extracellular matrix interact to shape cancer cell behaviors such as polarity, migration and proliferation.

Cancer cells routinely form in most people’s bodies in areas of low voltage, low oxygen and acidic pH. Bottom line: the more that acid conditions prevail the more aggressive the cancer. Hypoxia and extracellular acidity are deeply associated with the cellular microenvironment and the spread of cancer.
The direct effect of oxygen on pH on water is trivial, less than temperature variations, however the indirect effects are big. Without sufficient levels of oxygen, the cells cannot detoxify themselves, so acids build up. Without sufficient oxygen the cells turn to fermentation as an alternate source of energy for survival and this builds up acidity through the creation of lactic acid. Without enough oxygen cells turn cancerous or they die.

One of the Secrets to Life

A solution that is heavily acid can have one hundred trillion — 100,000,000,000,000 — times as many hydrogen ions as an alkaline solution. To be able to deal with these huge numbers, scientists use a logarithmic scale known as the pH scale. Each number on the scale indicates a change of 10 times the concentration of hydrogen ions in the solution. Hydrogen in its molecular form and in the form of H- ions is healthy but all those H+ ions are a bitch

pH is the measurement of the oxygen to hydrogen ratio in a liquid, ranging from 14 (a lot of oxygen – or Alkaline) to 1 (a lot of hydrogen – or Acidic). Bill Farr writes, “If you think of your cells as mini-vans, carrying 10 passengers, as long as seven of them are oxygen, and only three are hydrogen, all will be healthy and happy. That is until the day you decide you want a coke, some fried or processed foods instead of vegetables and continue eating this way. Soon, all of the hydrogen ion passengers push the oxygen molecules out of the van and your pH level starts to drop. Now, your body becomes desperate to pick up oxygen but there is only hydrogen offered, sliding the pH scale down to acidic. Then these hydrogen passengers begin to invite their friends to the party. Those friends are cancer, insomnia, bacteria infections, food allergies and the list goes on.”

An acidic pH can occur from an acid-forming diet that does not provide all the necessary minerals, emotional stress, toxic overload, immune over-reactions or any process that deprives the cells of oxygen and other nutrients. Normal body cells form lactic acid in general when their oxygen is cut off or their respiration is reduced. Many scientists have found that during forced bodily work the lactic acid of the blood increased. In this case the diffusion of oxygen into the muscle cells is not sufficient to cover the oxygen requirement of the muscle.

Blood’s pH comes into play because CO2 concentration helps determine pH. Carbon dioxide reacts with water to form carbonic acid; this reaction is catalyzed or accelerated by an enzyme found in our blood called carbonic anhydrase. Carbonic anhydrase loses a hydrogen ion to become bicarbonate, and this in turn loses a hydrogen ion to become the carbonate ion.

Something called the Henderson-Hasselbalch equation, shows that pH is governed by the ratio of base (HCO3–) concentration to acid (H2CO3) concentration. As hydrogen ions are added to the bicarbonate buffer:

However, if carbonic acid could be continuously removed from the system and bicarbonate constantly regenerated, then the buffering capacity and therefore pH could be maintained despite continued addition of hydrogen ions.

A slight acidity depresses oxidation, and increasing alkalinity, even to a marked degree, greatly increases the rate of oxidation. The work of Warburg, McClendon and Mitchell showed that in general an increase in hydroxyl ion concentration increased the oxygen consumption. Consumption of oxygen in the tissues increases with increasing pH.[1]

The pH of our blood is very tightly buffered thanks to the bicarbonate it contains and to hemoglobin. That’s why the pH of our blood stays within a narrow range. Since our cells release carbon dioxide as they break down sugars, however, the carbon dioxide and carbonic acid concentration is higher in blood flowing through your tissues than blood in your lungs, where it is relatively carbon dioxide–poor. Consequently, the pH of blood in the lungs stays fairly constant at around 7.6, while the pH of blood in the tissues is closer to 7.2. This slight difference in pH has important ramifications.

The most important factor in creating proper pH is increasing oxygen. If your body’s pH is not correct, because of low oxygen conditions, you cannot effectively assimilate vitamins, minerals, supplements, and food, and that is why even with a good diet it is often hard to pull out of diseased conditions. Our body’s pH affects everything including oxygen transport and delivery to the cells.

Ed McCabe, famously known as Mr. Oxygen, wrote, “Alkalinity and Oxygen go hand in hand. Being healthy, alive, and burning food for energy includes the constant process of billions of tiny cells making chemical reactions that continually generate waste acids in our bodies. The constant process of cleaning the waste acids out as fast as we make them is paramount to good health. Our bodies must maintain the proper balance between being alkaline or acid pH for us to be alive.”

Some people try to debunk the entire acid alkaline story of human health and disease saying “Because the cancer cell is producing lactic acid, does not mean that the whole body becomes acidic. In fact, the body has a very tight set of checks and balances which keeps your blood’s (i.e., body’s) pH between 7.35 – 7.45, or near neutral. It is also impossible to significantly alter one’s blood pH with the food you eat. Therefore, checking your saliva for acidity or alkalinity is not an accurate measure of your body’s actual pH balance (in the blood),” but it does give one an ideal of the state of balance of the rest of the body.

Researchers found that an increase of 1.2 metabolic units (oxygen consumption) was related to a decreased risk of cancer death, especially in lung and gastrointestinal cancers. People who are more active and exercise harder are less likely to develop cancer and die, suggests research published ahead of print in the British Journal of Sports Medicine. A higher use of oxygen consumption during physical activity is linked to a reduction in the level of illness in a person and their likelihood of dying from cancer.

It is widely accepted scientifically that a body with too many accumulated waste toxins and acids is unhealthy and often painful. As readily seen – and felt – an example of this is when we become sore after exercise. This soreness is entirely due to the over-accumulation of lactic acid in our muscles. It’s just waiting to be removed. In a few minutes, hours or days the body marshals its resources and buffers the lactic acid – and the soreness goes away.

Cancer causes an over-accumulation of lactic acid around the cancer site that causes other nearby cells to become aberrated. Some remove this cascade of advancing acid-fueled cancers by increasing alkalinity and this is easily done with sodium bicarbonate.

Warburg’s work clearly demonstrated that cancer is, fundamentally, a relatively simple disease where cell oxygen levels fall to a level sufficiently low enough for the cell to change in nature. Without a dependable supply of oxygen, the cells in our bodies cannot function properly. Nutrients in our diets must have oxygen present to convert their potential energy into usable energy. For new cells to be formed, hundreds of amino acids must link together using oxygen as the source of their energy.
Posted by arclein at 12:00 AM