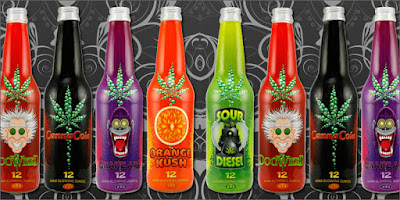 On its own, cannabis will be a huge industry as an alternative to all forms of alcohol, particularly with oral products that allow you to avoid smoking.   It does not chemically encourage usage abuse as we have with alcohol.  Beverage forms are clearly called for to accommodate social drinking but then can be readily nursed as well as can be done with a glass of fine wine.
We already have a culture of controlled drinking and this can reinforce that culture.
Throw in the rapidly rising application to pain relief and a number of other ailments and we have a pharmaceutical revolution rolling out that is able to legitimately displace addictive opiods.
Right now the science is on a rip in order to correctly exploit this particular  product with both THC and CBD looking good.  Of course a lot of the optimism is possibly misplaced, but not in error either.  CBD may not cure your cancer, but it may help control suffering and that alone is a boon..

The CEO of Canadian marijuana producer Canopy Growth says that marijuana is set to disrupt $500 billion in global markets.
Bruce Linton - whose company recently shipped cannabis from Canada to the United States using a yet-undisclosed "DEA-approved partner," told CNBC's Jim Cramer that the "back-of-the-envelope math" pencils out - between therapeutic cannabinoid treatments to a cultural shift from alcohol and tobacco to recreational pot use.
"We disrupt alcohol potentially, cigarettes potentially, in terms of smoking cessation," he told Cramer. "We really disrupt pharmaceutical, because whether or not you're geriatric care, you're dealing with arthritic conditions, you're someone who can't sleep, you're going through an oncology treatment, I think you're going to find cannabinoid therapies really hit there."
"And so you add all that together, plus the existing $200 billion illicit market, that pretty quickly gets you up around $500 billion," Linton continued. "It sounds like a 'How could it be?' but just do a bit of the back-of-the-envelope math. It's not crazy."
Canopy made headlines last week after announcing several-billion-dollar investments from Corona parent company, Constellation Brands, as well as legal shipment of marijuana, a Schedule 1 drug, into the United States.

"Under [Drug Enforcement Administration] approval, we shipped, for the first time, legally — and I highlight 'legally' — cannabis from Canada to the U.S," Bruce Linton, the co-founder, Chairman and CEO of Canopy Growth, told CNBC's Jim Cramer.
"The DEA-approved partner, which we haven't announced yet, can actually begin to do medical research, clinical trials if necessary, [and] create the data set that enables people to know when, what, where, and maybe it can become federally regulated in the U.S. with some input that way," Linton said in an interview on "Mad Money." -CNBC

The positive news for Canopy comes on the heels of competitor Tilray announcing DEA approval to import cannabis into the United States for medical research at the University of California San Diego's Center for Medicinal Cannabis Research. As CNBC notes, California is one of eight states to fully legalize medical and recreational marijuana use, while thirty states currently legalize some form of medical marijuana.
Canada will fully legalize adult marijuana use next Wednesday, October 17, which is expected to result in a massive windfall for producers such as Canopy.
Linton says that Canada's legalization has forced governments worldwide to consider how they can get in on the action.
"Last week I was in the EU, the U.K. They know about Oct. 17 intimately and they're trying to figure out, 'Hm, if we're a government or businesses, how do we quit ignoring cannabis and govern it, regulate it, tax it and turn it into something that might be medicinal and for sure a much better formatted product for a party?'" he said.
"And so what's going to be the big bump isn't just Canada," he said. "If we do it right, Canopy leads. That gives us the position globally that then, all of a sudden, you add a zero or two to the number of people we're trying to serve."
Watch: