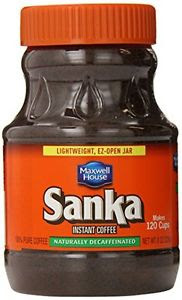 In university residence we all lived on instant coffee. I have barely touched it since and actually gave up coffee itself almost twenty five years ago when i understood just how much sugar it led me to consume.  No one was happier than myself when i saw Stevia show up at Starbucks, though i now use scant sweeteners. It has allowed my wife to end much of her sugar habit.  Bulk sales ofstevia packets cannot be too far out.

It has been a long ride and it is good to see quality is slowly inching ahead.  While i was in Europe this spring i was able to enjoy ample cappuccino as my usual tea preferences were hard to sustain.  Otherwise i now drink it rarely except as treat.

That market and the specialty market is certainly expanding thanks to Starbucks and its imitators, even now in China.  Whether the instant market has a real niche or not beyond what i just described as a necessary evil or not remains to be proven.  A quality decaf could compete with chocolate..

It’s the drinkable definition of instant gratification. So why don’t most Americans take their coffee in powdered form?

It got off to a bad start. The first powders were made using intense heat that damaged the delicate, supremely flavorful oils that give coffee its aroma. During World War I, the tiny envelopes rationed to American soldiers were credited with greatly improving morale, but breakfast table standards were higher. Around the world, more than a third of coffee drinkers stir it up, both for convenience and specialty drinks.

Even if you have a taste for fine coffee, you may soon be among them. Our age of creeping coffee mania means it’s now possible to pay $2, $3, even $6 a cup for instant coffees made from single-origin, fair trade coffee beans, using methods that preserve their flavor. The challenge for the new wave of US-based instant coffee disruptors like Sudden, Voila, and Swift Cup is that decades of famous advertising means the medium is synonymous with iconic brands like Sanka and Folgers Crystals—warm memories but mediocre taste.

Put the kettle on and let’s celebrate the moments of our lives, and whatever comes next.


$9.1 billion: Nescafé sales in 2017
3: Cups of coffee the average person living in mainland China drinks each year
20: Estimated percent increase, yearly, for Chinese demand for coffee
$28: Price for an eight-cup pack of Sudden single-origin instant coffee
$13.65: Price for a 16 oz. can of Folgers Crystals, which makes approximately 180 8 oz. cups
34: Percent of retail coffee sales that are instant, worldwide
317: Cups of instant coffee per capita that Georgians, the world’s leading instant coffee drinkers, consumed in 2016, according to Euromonitor
5,500: Cups of Nescafé consumed each second, worldwide

37,000: Pounds of instant coffee a day the US military consumed by the end of World War I
Giphy

The art of sublimation


There are two basic ways to make instant coffee. In 1938, Nescafé invented a process of spraying coffee into a very hot, very dry camber. The water quickly evaporates, leaving behind a coffee powder that can be rehydrated. The problem is that many of the volatile chemical compounds that give coffee its aroma and flavor are damaged or lost in the process.

In the 1960s, freeze drying became the method of choice for most instant coffee. This process starts with brewed coffee, which is then reduced down to a thick paste, frozen, and then reheated under pressure, during which sublimation occurs. Recall the water cycle: usually water has to pass from solid to liquid form to reach its gas phase. Sublimation skips that step by putting frozen coffee under intense pressure, allowing more flavor to remain.

1889: David Strang applies for a patent for soluble coffee powder in New Zealand
1901: Satori Kato, a Japanese chemist, serves his dried-coffee powder at the Pan-American Exposition in Buffalo, NY
1904: The first decaffeinated coffee is sold in Europe under the name Kaffee Hag
1910: Brooklyn, NY-based G. Washington Coffee Refining Co. starts producing the first mass market instant coffee
1923: Sanka is introduced to the US and a nation becomes hooked on the idea of instant decaf
1938: Nestle debuts Nescafé

2009: Predicting a resurgence, Starbucks launches VIA, a line of instant coffee that now includes a Pumpkin Spice flavor (👆).

Photographers with their own dark rooms sometimes use instant coffee as an ingredient in Caffenol-C—a homemade developing solution for black and white photos that also calls for vitamin C and washing soda.

Around the world in an instant

Most of the globe drinks more instant coffee than the US—much of it some variety of Nescafé. Sales in the US have inched upward since 2000, according to Euromonitor data, while worldwide they’ve almost tripled.

In places where caffeine is traditionally consumed in tea form, like Russia, Eastern Europe, and much of Asia, instant coffee (along with ready-to-drink cans and bottles) has been an entry point for new coffee drinkers, since it can be made almost anywhere, at low cost, and without any special equipment. Nestle has invested heavily in marketing Nescafé and Nespresso—their instant espresso pods and machines—in China, where yearly coffee market growth is expected to continue at 20% a year for the foreseeable future.


More than three-quarters of the coffee Britons consume at home is instant, and the same goes for Australia and New Zealand (in Italy instant accounts for only about 1%). Though Indians drink more freshly brewed coffee than instant, instant coffee is often dissolved into hot milk, rather than water—sometimes to make a delicacy known as the “Indian cappuccino.” And in Greece, a concoction of Nescafé, sugar, water, and ice is combined with a special hand mixer to make a frothy, chilly drink called a frappé that has become a national obsession.

“There’s been this kind of, um, gosh, you could call it a disruption—if it weren’t such a clichéd term—for getting people to think fresh about the fact that there is the potential for instant coffee to not be gross.”


the 1993 comedy Cool Runnings about a Jamaican bobsled team features a character named “Sanka Coffie,” a clear violation of Roger Ebert’s First Law of Funny Names: No names are funny unless used by W.C. Fields or Groucho Marx.

How orange came to = decaf


The turn of the 20th century was a heady time for coffee technology, and instant coffee wasn’t the only innovation percolating. In 1900, Ludwig Roselius developed a method for decaffeinating green coffee beans. He founded the German company Kaffee Hag and started selling decaffeinated coffee in Europe. Supposedly the name “Sanka” emerged as mash-up from French: sans caféine, which translates to “without caffeine.”

Introduced in the US in 1923, Sanka reigned as pretty much the only decaf option on the American market until the 1980s, when brands like Folgers and Maxwell House started to offer ground decaf to consumers worried about their caffeine consumption.


Sanka’s marketing—it was a sponsor of I Love Lucy, The Twilight Zone, and The Andy Griffith Show—has always been bolder than its coffee flavor. The bright orange label made the color a shorthand for decaf, and many diner percolators are still set up so that decaf is served from a carafe with an orange top.

How to make Indian cappuccino


Combine a spoonful of Nescafé with sugar and a little bit of water, then mix it into a pale beige merengue-like substance. Add it to hot milk for a sweet, creamy, frothy drink.

Take me down this ☕️ hole

Americans might not consume much instant coffee, but if they’re of a certain age, they’ve consumed a ton of advertising for the product.

☕️ Folgers’ famous “Mrs. Olson” ads, featuring an older Swedish woman teaching a new bride to placate her husband with coffee, were researched to see how “aggressive and ugly” they could be.

☕️ In 2000, Folgers enlisted KISS frontman Paul Stanley to sing its famous “best part of waking up” jingle. It never aired, but it did leak.

☕️ Actor Robert Young made more money on his one-minute Sanka ads than for his roles in Father Knows Best or Marcus Welby, M.D.