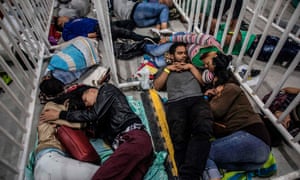 We gave been fed a lot of bunkum here whose intent it to rationalize the landing of USA troops.  Other reports are saying nothing of the kind and even here we quote 1000,000 making it into Columbia.  Any other direction is impossible.  The real numbers are likely much lower and may actually be around a couple hundred thousand.

We have an apparent effort to remove Maduro who may or may not have been fairly elected.

What we now lack is real facts on the ground..  The whole situation can surely be settled since sanctions are actually blocking money transfers.

Nearly two million people have fled Venezuela’s economic and political crisis since 2015, according to the UN which called for a “non-political” response to an exodus that is straining regional resources.

“A non-political and humanitarian approach is essential to help states receiving them in growing numbers,” he added.

UNHCR spokesman William Spindler told AFP that 1.9 million people had left the country since 2015, an increase on a previous count of 1.6 milion.

According to the UNHCR, 2.6 million Venezuelans are now living abroad.

Colombia, which has taken in more than a million Venezuelans, called last week for a regional response, saying the migrant crisis was costing it about 0.5% of GDP – around $1.5m.

Oil income-dependent Venezuela’s economic woes began in 2014 with the crash in the price of crude.
Venezuelan president Nicolás Maduro’s government has since been slapped with a range of sanctions over its crackdown on the opposition and civil society critics.