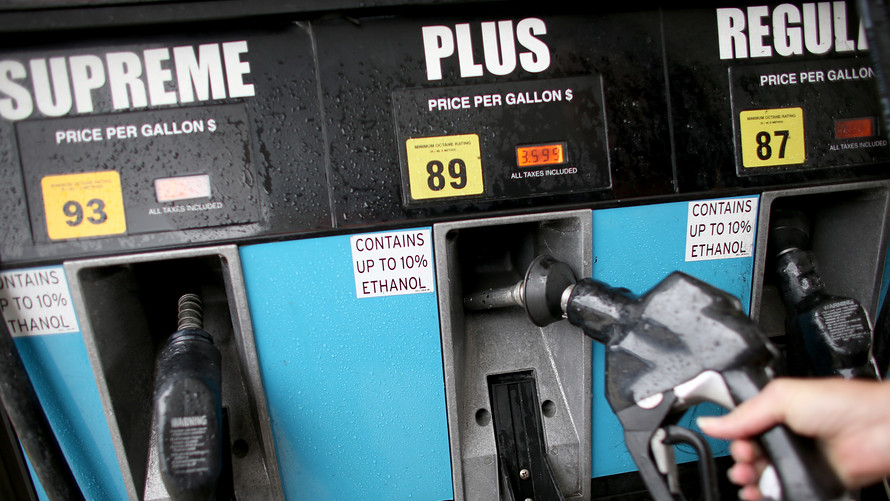 While  i am no fan of ethanol, we have it and expanding the market inside the USA is sound for the present.  At least the enthusiasm of the past is now abated.
I do think that growing cattails would produce a far more ample feed stock that corn though in terms of yield and as much usable silage and potential bio char.
In the meantime, expanding the local market for corn is a good choice while we are threatening a trade war in order to bring our trade partners to their senses along with ourselves as well...
.
Here’s what Trump’s ethanol plan means for farmers, refiners and motorists
Published: Oct 9, 2018 4:23 p.m. ET

Corn farmers benefit, but some refiners and car engines won’t

President Donald Trump’s plans to allow the sale of a higher concentration of ethanol in gasoline throughout the year would appease U.S. corn farmers who have been stung by low corn prices as a result of the U.S.-China trade dispute and likely even lead to lower prices at the pump.

Some refiners and older car engines, however, may pay the price.

Trump is expected to announce a directive later Tuesday that would allow the year-round sale of gasoline with up to 15% ethanol, also know as E15. That would include the use of the blend even during the summer driving season. Its use in the summer months is currently banned as it can produce more smog.

“You can approve this all day long, but Americans don’t necessarily want it,” said Patrick DeHaan, head of petroleum analysis at fuel price tracker GasBuddy.

It would help to push corn prices higher and benefit farmers, and it may even help to lower prices for gasoline, but it would hurt refiners who don’t have the ability to blend ethanol—and there are also concerns about the impact of E15 in car engines, especially those made before 2001, he said.
Engine risks

“On the negative side, selling a 15% ethanol blend means that retailers have a fuel that is not back dated, in that it is inappropriate for older cars,” said Tom Kloza, global head of energy analysis at the Oil Price Information Service, or OPIS.

“That leads to problems with labeling, equipment, and could under some circumstances create performance issues for, say, 1990s cars,” he said.

DeHaan, meanwhile, pointed out that the Environmental Protection Agency has an interesting warning label on E15, which basically warns motorists not to fill up with that type of gasoline blend if their car was made before 2001.
Environment

The EPA regulates the “Reid vapor pressure,” or RVP, of gasoline during the summer from June 1 to Sept. 15. That’s generic team for gasoline volatility and it’s monitored to reduce “evaporative emissions from gasoline that contribute to ground-level ozone.

The EPA grants a 1 pound per square inch RVP waiver for E10, but has so far declined to expand the waiver for summer E15, said Brian Milne, energy editor and product manage with DTN.

Increasing the concentration of ethanol in gasoline to 15% from 10% leads to a higher RVP number than allowed during the summer, said DeHaan.
Renewable fuel credits

The change also has implications for renewable fuel credits.

Renewable identification numbers, or RINs, are used to track batches of biofuel, such as ethanol. They serve as credits and act basically like a currency in the renewable fuel standard program aimed at reducing greenhouse gas emissions. Renewable fuel producers generate RINs and obligated parties obtain and ultimately retire RINs for compliance, according to the EPA.

But market participants can also trade them.

Trump’s directive, however, would include a call to reform this credit system. The White House said it will push for more transparency in the system and look to offset market speculators by limiting RINs to obligated parties, The Wall Street Journal reported.

Milne said he expects Trump’s announcement to be bearish for RIN prices, which have been “hammered lower, while offering ethanol producers greater demand opportunities next year.”

“Raising the ethanol blend rate would be a win-win for the pocketbook of every corn farmer,” said Sal Gilbertie, president and chief investment officer at Teucrium Trading LLC. “It would be viewed as supportive to the corn markets.”

Corn futures CZ8, -0.48% trade around 4% higher year to date, but that’s after suffering declines in each of the last five years. Notably, in 2013, futures prices dropped nearly 40% on ample inventories.

It would be a “huge win for farmers in the corn lobby who are obviously suffering from low corn prices, especially in light of the trade battle Trump has provoked with China,” said DeHaan. “This is kind of a no-brainer throw back to farmers who are suffering from those sanctions.”

E15 could also be a win for motorists.

“Right now, a gallon of ethanol is about 70 cents cheaper than a gallon of gasoline, which means adding 5% more ethanol will reduce the price of a gallon gasoline by about 3½ cents—in addition to the about 7 cents a gallon price benefit consumers are already receiving due to the current price of ethanol in relation to gasoline and the 10% blend,” he said.

DeHaan put the savings for motorists at about five to 10 cents a gallon versus E10, but if ethanol prices go up due to intense demand, E15 could end up costing more, he said.

The average U.S. price for regular unleaded stood at $2.904 a gallon Tuesday afternoon, according to GasBuddy. Prices are up about 43 cents a gallon from last y ear’s average of $2.472. (DeHaan said there is no distinction between E10 and E15, but almost all regular gasoline is E10.)
Timing

The implementation of the rule might depend on hurdles presented by the rule-making process as well as any legal challenges.

All said, however, Trump’s expected announcement will “do nothing to influence gasoline and ethanol prices in the next six to nine months,” said Kloza of OPIS. “I doubt whether legal hurdles can be cleared even in time to impact then next driving season.”

“The winners are the lawyers for the moment,” he added.

Providing critical information for the U.S. trading day. Subscribe to MarketWatch's free Need to Know newsletter. Sign up here.
Posted by arclein at 12:00 AM