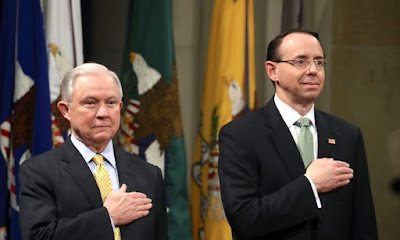 Now that we have entered the midterms full press, all this declassification  has passed from the news cycle.

This item  makes it clear that there are no remaining secrets anyway except actionable evidence against Rosenstein in particular and others as well.  Certainly the informed public knows this.

What we have is valuable leverage or the appearance thereof.  This way Rosenstein is kept in play until the midterms are over and even then he may well stay on because he flipped a long time ago as possibly Mueller as well.

I do suspect that Trey Gowdy will become the new head of the FBI. We have clearly entered the end game.  55,000 + sealed indictments means a mass roundup likely starting in the new year with the new electors installed.  This sword has been hanging a long time now and it is no secret if you are on the list.

Read the last Q drop ( Oct 9 )to see the whole picture of this unprecedented operation.

By the way, after his private trip on air force one, Rosenstein looks happy.

October 10, 2018
There's a reason why President Trump has not unilaterally declassified the documents exposing perfidy against him: leverage.  As the whole Russia hoax is beginning to come into some sort of global perspective – quite literally, as we'll see – the extent of the advantage he now maintains by holding back declassification as a threat outweighs the benefits of transparency.  Recent posts by observers who write from widely varying perspectives give us the ability to discern the current state of play.

Let's start with the domestic front of the Russia hoax.  Sundance at Conservative Tree House has an excellent post up: "President Trump and DAG Rod Rosenstein – "No Collusion", No Immediate Worries..."  The overall theme is one that's dear to Sundance's heart: leverage.  The state of play is this: the congressional investigation has progressed to the point that it's clear beyond cavil that the entire Russia narrative is, in fact, a hoax and fraud – both on the American people in general and on our legal system.  This is to say real criminal liability exists for the key players who developed the plot against Trump.  John Solomon summarizes what Congress has discovered in succinct fashion:

There is now a concrete storyline backed by irrefutable evidence: The FBI allowed itself to take political opposition research created by one party to defeat another in an election, treated it like actionable intelligence, presented it to the court as substantiated, and then used it to justify spying on an adviser for the campaign of that party's duly chosen nominee for president in the final days of a presidential election.

And when, nine months later, the FBI could not prove the allegation of collusion between Trump and Russia, unverified evidence was leaked to the media to try to sustain public support for a continued investigation.

There are many other players, in addition to Rosenstein, who are at serious risk.  But from the perspective of leverage, Rosenstein is the key because he created the special counsel part of the hoax and because – as a result of A.G. Sessions's recusal – he remains in charge of the special counsel operation.  Rosenstein can exercise as much or as little control over Mueller as he wants.  Trump's threat of declassification of the "origination material" gives Trump complete leverage over Rosenstein and therefore over Mueller.

Trump's leverage ensures that Rosenstein will very much want to restrain Mueller.  If Rosenstein wants to restrain Mueller, Mueller will be restrained.  This may explain why we are now seeing key members of Mueller's team leaving and returning to their old jobs.  The importance of this is that Mueller has posed the greatest threat to the Trump administration, the greatest annoyance.  That threat is now defanged for the immediate future.  If Mueller steps out of line, boom!  Declassification.  By putting declassification on hold, Trump maintains his leverage.  And Congress continues to investigate and slowly reveal the truth.

The benefits of this leverage via threat-of-declassification extend well beyond the Russia hoax to other practical political matters.  I believe we saw that at play in the Kavanaugh nomination battle.  Rod Rosenstein, as DAG, directly supervises the FBI director, Christopher Wray.  To say the FBI acted with alacrity and efficiency in exposing the machinations behind the accusations leveled at Kavanaugh would be an understatement.  But consider: Sundance himself was distinctly alarmist during the Kavanaugh hearings, alleging a plot of Deep State FBI-DOJ insiders to torpedo the nomination.  As we've seen, however, exactly the opposite occurred.  The FBI leaped to Kavanaugh's defense, and I attribute that to Trump's leverage over the DOJ-FBI through Rosenstein.

How will this play out for the midterm elections?  Will Trump at some point declassify that crucial "origination material"?  While Trump stressed that his hold on declassification doesn't change his commitment for transparency sooner rather than later, I believe that the Kavanaugh nomination has given Trump and his newly committed GOP allies the issue they need for the midterms.  Polling has repeatedly shown that Supreme Court nominations are a hot-button issue for Republican voters, and it has the advantage of being readily comprehensible.  Trump used his leverage to get his nominee confirmed while energizing "normals" for the midterms.  After the election, declassification could play a significant role in the run-up to the 2020 presidential election.

Justin Raimondo at Anti-War.com has a blog post up that complements Sundance's "leverage" perspective quite nicely: "The Final Truth of Russia-gate: As the hoax unravels, the real story of 'foreign collusion' comes out."  Raimondo focuses on the role of foreign "allies" in the plot against Trump.  As on the domestic front, there were multiple players: Australia, Ukraine, Estonia, Israel.  The key player was undoubtedly the U.K.  Without massive intelligence involvement by the U.K., the entire Russia hoax would likely never have gotten off the ground.  Here, Raimondo encapsulates that involvement sufficiently for our purposes (much more could be said):

This entire episode has Her Majesty's Secret Service's fingerprints all over it.  Steele's key role is plain enough: here was a British spook who was not only hired by the Clinton campaign to dig up dirt on Trump but was unusually passionate about his work – almost as if he'd have done it for free.  And then there was the earliest approach to the Trump campaign, made by Cambridge professor and longtime spook Stefan Halper to Carter Page.  And then there's the mysterious alleged "link" to Russian intelligence, Professor Joseph Mifsud, whose murky British-based thinktank managed to operate openly despite later claims it was a Russian covert operation.

It was Mifsud who orchestrated the Russia-gate hoax, first suggesting that the Russians had Hillary Clinton's emails, and then disappearing into thin air as soon as the story he had planted percolated into plain view.  Some "Russian agent"!

Leverage, anyone?  Declassification would expose all these foreign players, but the heaviest hit by far would be against the U.K. and its Australian poodle.  And so we learn that "key allies" "begged" Trump not to declassify that "origination material."  Raimondo notes:

Trump's decision to walk back his announcement that the key Russia-gate intelligence would be declassified tells us almost as much as if he'd tweeted it out, unredacted.  For what it tells us is that public knowledge of the contents would constitute a major break in relations with at least one key ally.

Yes, Trump smoked them out and got them begging for mercy, as reported by the major media in all too transparent detail.  Trump ends up with all the leverage he needs over "Her Majesty's Government" for as long as that leverage is useful.